Afghan rights activist and winner of this year's Alternative Nobel Prize Sima Samar tells DW about her life and work and her fight for women's rights in her country. 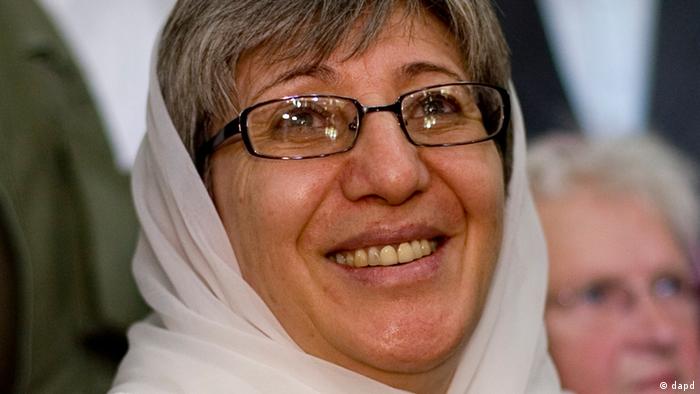 Sima Samar: I would like to thank the DW Afghanistan department for giving me the first call after the announcement of the award and for letting me know!

Have you heard this news before I called you?

Officially, it was first said by you and I am very proud to receive it. I dedicate this award to the Afghan women and particularly to those women who cannot raise their voice in Afghanistan. I am very proud that the international community really recognizes the suffering of the Afghan women and their struggle for equality, for justice and also for human rights in this country.

Did you expect to win the prize this year?

Actually, I did not expect it, but I knew I was nominated. So I am very glad that they recognized the Afghan women and our struggle in a country like Afghanistan. I have not done any exceptional work, but I have to say that the environment and the situation in Afghanistan is really difficult.

When did you start your activity as human rights activist?

I began my work for equality and for women's rights and for justice in Afghanistan long ago. As a medical doctor, I was providing different kinds of work: basic social services to the public, education and health, particularly for Afghan women and children in Pakistan and also in Afghanistan. But for 11 years, I have been the chair of the Afghanistan Independent Human Rights Commission (AIHRC) and I can proudly say that the AIHRC achievement is really exceptional in the region, because none of all neighbouring countries has a human rights commission and none of them has the ability to speak so openly against the violation of human rights in their countries. You know our neighbouring countries - they are Pakistan, Tajikistan, Uzbekistan and Turkmenistan - none of them has a human rights commission. Although we have a very difficult situation in Afghanistan - we still are in war - but the human rights commission in Afghanistan was able to exist and establish offices in different parts of the country.

As we hear everyday, the violence in your country, especially against women, continues. What is your main concern in this regard?

I think the positive achievement of the HRC in Afghanistan is that we can really fight. For example, torture in this country was very common. Everybody was running the country without any kind of accountability to the people. So torture is not an uncommon issue. Now, if the policemen or anybody commits torture, they at least try to hide it from the HRC observers, and that is a big achievement. I think the establishment of a HRC in a conflict country like Afghanistan is not an easy job. It is a big achievement of all of my colleagues, not only me. And that is good, because almost the majority of the public in Afghanistan knows about their basic rights. This is something very unusual and exceptional in a conflict country like Afghanistan. We have a lot of conflict countries around the world, but none of them has such a strong HRC as we have in Afghanistan.

In your birth place, Jaghori District of Ghazni province, a teenage girl received 100 lashes just two weeks ago. This district is not under the control of Taliban. Is it not upsetting that a member of the Afghan police carried out the lashings? Do you think Afghanistan will return to the Taliban era?

This was outside of the court and the people lashed the girl. We took a position. We pushed the government to begin an investigation. Those people who announced the decree that she should be lashed are also in detention and they are being questioned by the authorities. The civil society, the young generation from Jaghori, they had a demonstration, so incidents like that one will not be able to continue. We call on the government to bring those people to justice. It is very sad that they did that in Jaghori, because Jaghori has the majority of educated people in the country compared to any other district, including Kabul district. Jaghori has a lot of high schools. I think we have 54 high schools in the district in total.

Now that you have won the Alternative Nobel Prize, what is your message to Afghan women?

You know Afghan women - and women of any country, when there is no rule of law - they will be more in danger, but the women in Afghanistan after the fall of Taliban in Afghanistan achieved a lot. But those rights are not guaranteed. So we really still have a long way to go in our fight for equality. And I think the only solution to the Afghan conflict is the equality and promotion of human rights. We have to respect human rights - everybody who lives in this country should have equal rights. Nobody is above anyone else, and nobody is above the law. So we are fighting for the rule of law and human rights and human dignity in Afghanistan, and that can be done with a lot of support from the public and also from the international community which supports building democracy in Afghanistan. And I believe democracy cannot be built without respect for human rights.

Pashtuns make up about 15 percent of the population of Pakistan. Most live in the remote northwest. But even in big cities, Pashtun women face discrimination, and some are not even allowed to carry ID cards. (28.08.2012)

A young woman in Afghanistan was publicly executed for allegedly committing adultery. The Taliban welcomed the shooting, but due to a wave of outrage, have refused to accept responsibility. (09.07.2012)