Afghanistan prepares for presidential election amid Taliban threats | Asia| An in-depth look at news from across the continent | DW | 26.09.2019

As the war-torn country elects a president, experts have warned that widespread fraud and a low voter turnout due to Taliban threats could combine to cause an electoral crisis in Afghanistan.

Only a month ago, few people in Afghanistan and western diplomatic circles expected the presidential election to take place in the south Asian country this Saturday.

It was widely believed that the US-Taliban talks in Qatar would succeed, resulting in a deal between the two sides.

Hopes were high that an agreement would pave the way for US troops' withdrawal from Afghanistan and a further postponement of the presidential elections which were planned for September 28.

As the Qatar talks seemed to be progressing swiftly, campaigning was subdued, and many politicians did not even hold events. Instead, they focused on the intra-Afghan dialogue, which would have taken place last Monday had the US-Taliban deal gone through.

However on September 7, US President Donald Trump called off negotiations with the Taliban. His announcement came as a surprise to the Taliban and Afghan presidential nominees alike. The broken negotiations meant candidates had to go into high gear to make up for the lost time. 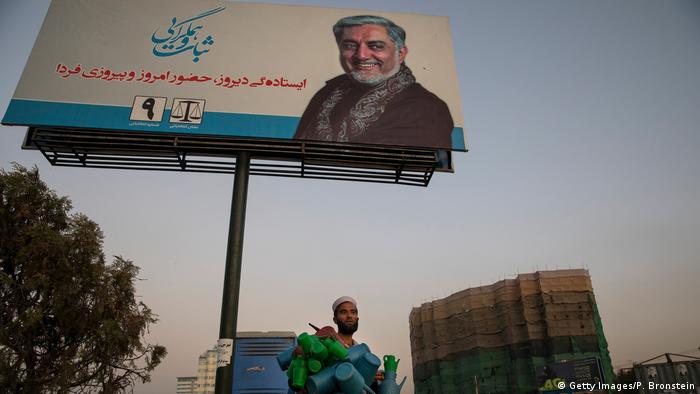 Overall, 18 hopefuls registered with Afghanistan's Independent Elections Commission (IEC) to run for president. Many of the hopefuls were considered to be longshot candidates, and many withdrew from the race in favor of the two leading nominees: current Afghan President Ashraf Ghani, and his Chief Executive Abdullah Abdullah.

Other candidates include former warlord Gulbuddin Hekmatyar, who until 2015 was among the Afghan government's armed opponents, and former intelligence chief Ramatullah Nabil.

Since the US-Taliban negotiations fell through, all candidates in the race  — Ghani and Abdullah in particular — have held campaign rallies in different Afghan provinces. But observers believe the campaigning has not been enough to reach voters.

"Our findings show that no major campaign event has been held in 14 of Afghanistan’s 34 provinces," said Yousuf Rasheed whose organization, Free and Fair Election Forum of Afghanistan (FEFA), provides oversight of the electoral process.

On Thursday, the Taliban ordered fighters to use all means at their disposal to disrupt the vote. The group has issued similar warnings during previous elections in Afghanistan, but experts are concerned their attacks on Saturday's election could be deadlier.

The Taliban have already claimed responsibility for two attacks on current President Ashraf Ghani's campaign rallies. The latest attack killed 26 people in central Parwan province last week and targeted a rally that the president himself was attending. Ghani survived the attack unharmed.

"We have ordered 72,000 Afghan security forces to secure 4,949 voting centers across Afghanistan," a spokesperson for Afghanistan's Interior Ministry told DW.

However, it is still unclear whether such assurances could convince Afghans to leave their homes on the election day. Many Afghans told DW in phone interviews that they are determined to participate in the elections, while some said they thought the risk is not worth taking.

"I have decided not vote on Saturday due to security reasons," Kabul resident Nilofar Jabari told DW.

"Even now, I don't know if I will return home alive each time I leave home. The threat to the elections will be much higher," she added.

Both Ghani and Abdullah both ran in Afghanistan's 2014 presidential elections, and both claimed victory, which took the country to the brink of an all-out civil war.

Both accused one another of fraud and ballot stuffing. The confrontation only ended after US intervened by brokering a power-sharing deal between the two.

Despite working in the same government for five years, Ghani and Abdullah have not been on good terms with each other. Many observers fear the 2014 scenario could repeat itself in case IEC fails to hold fair elections, or if one of the candidates rejects the outcome.

"We still have concerns about transparency of the upcoming elections," election observer Rasheed said.

To win the elections, a candidate must get over 50% of the votes, otherwise a runoff will take place. A contested election marked by violence could destabilize the country.

Observers fear lower turnout also increases chances of a post-election crisis in Afghanistan. Over 9 million Afghans have registered to cast their votes on Saturday, but observers fear the turnout could be lower than 50% of that number.

"If over 4 million people brave threats and vote, the elections could be considered a success, but I am afraid the number could be lower than that," Rasheed warned.

With John Bolton's departure, a reckless warmonger leaves the White House. This may be a good sign for diplomacy, but he was also one of the last critical voices in Trump's environment, says DW's Oliver Sallet. (11.09.2019)