Afghanistan: Pakistan rejoices at Taliban victory as West flounders | Asia | An in-depth look at news from across the continent | DW | 18.08.2021

Many Pakistanis are euphoric after the victory of the Taliban, celebrating the fall of Kabul, and the seizure of power by the extremist group, which has historic ties with Islamabad. 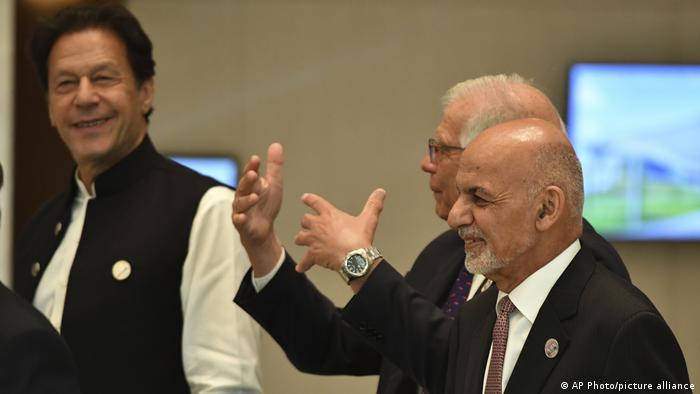 Imran Khan said the Taliban have broken "the shackles of slavery"

Afghanistan has a familiar power back in place. Kabul has fallen. The Taliban have won. And Pakistanis are euphoric.

To many a foe, but to others a friend, the cloistered group of extremists has long held cordial ties with Islamabad, and the Taliban's recent rise from the flames has left many Pakistanis in raptures.

Khan: Removal of the 'shackles of slavery'

Even the country's prime minister, Imran Khan, has been waxing lyrical, heaping eulogies on the group of militants, who openly violated women's rights, in addition to flouting a number of other norms of the civilized world, during their stint in power from 1996 to 2001.

Khan, who often resorts to anti-West rhetoric, said Monday during a ceremony in Islamabad that Afghans have broken the "shackles of slavery." It was seen as a clear endorsement of Afghanistan's new rulers, but also as a sideswipe at those who invaded Pakistan's neighbor in the aftermath of the September 11 attacks in the United States.

Maulana Fazlur Rehman, the leader of Jamiat-e-Islami (JUI-F), the largest Islamic party with pro-Taliban credentials, has written a letter to the chief of the Afghan Taliban, Mullah Haibatullah Akhundzada, congratulating him on the victory.

Siraj ul Haq, a former senator and the leader of Jamaat-e-Islami, Pakistan's second-largest Islamic party, also expressed his jubilation over the return of the Taliban. Ijaz ul Haq, the son of dictator General Zia, who backed the Afghan mujahedeen during the Soviet invasion, also showered praise on the cloistered group. Mufti Taqi Usmani, Pakistan's top Islamic scholar, was also exultant.

It is not only right-wing religious circles that have hailed the fall. A few leftist groups have also expressed euphoria about the defeat of "imperialist America."

Even Federal Human Rights Minister Shireen M Mazari, who is considered socially liberal, equated the fall of Kabul and the scramble of the United States to evacuate its citizens from the besieged capital to a previous debacle in Saigon. In 1975, the United States airlifted US citizens and some Vietnamese allies as the city fell to the Viet Cong.

Rights activists have sharply criticized her for the remarks and asserted that the human rights minister has expressed her joy over the victory of a group that has been accused of violating the very rights that she is supposed to protect.

Most of the prominent media anchors, who are very Western in their outlook, also joined the celebrations, taunting India for the defeat in Afghanistan, sharing the interview of former ISI chief General Hameed Gul, who is considered the godfather of jihadis, and highlighting the egalitarianism of the Taliban.

Pakistani media covered the fall round the clock with analysts trying to prove that the country's support for the Afghan Taliban was pragmatic and beneficial for the Islamic Republic.

Analysts believe that there are different factors at play, prompting Pakistanis to hail the victory of the Taliban.

Former Jamaat-e-Islami lawmaker Samia Raheel Qazi told DW that most Pakistanis were happy about the victory because the Taliban are friendly toward Pakistan.

But it's the anti-Indian sentiment that has given extra impetus to the euphoria, she said.

The former government in Afghanistan had allowed India to increase its influence, which created problems for Pakistanis in their tribal area and Balochistan, Raheel Qazi said, adding that there was a triangle of India, Israel and the US that was working against Pakistan. "With the victory of the Taliban, that Indian influence has ended, and now the US and other superpowers should also let Afghans live," she said.

Talat A Wizarat, a Karachi-based analyst, agrees. Indian consulates in Jalalabad, Afghanistan's fifth-largest city, and other places were actively working against Pakistan, supporting Baloch insurgents and sabotaging the China-Pakistan Economic Corridor (CPEC) and Belt and Road Initiative projects, in collusion with the US CIA, she told DW.

"Now, with the advent of the Afghan Taliban, this nexus of the CIA and Indian intelligence agencies will be broken," she said. The elimination of Indian influence after the capture of Kabul is a big source of joy for Pakistanis, she added.

Muhammad Jalal Uddin, a leader of JUI-F, told DW that, for Pakistan, it is especially very positive because the Indian influence would be extinguished in Afghanistan now. The sanctuaries of Baloch separatists would be eliminated, and the Pashtun Tahafuz Movement will not get any support from its Indian and Afghan patrons, he said.

Religion to the fore

Many Pakistanis are jubilant about the Taliban's success because of their religious affinity. Pakistan houses more than 36,000 religious seminaries, and more than half of them are run with the same Deobandi ideology — a conservative Islamic school of thought — that is shared by the Afghan Taliban.

Some of the Taliban leaders have been graduates of such schools, which are immensely popular in Pakistan. The institutions claim to impart scientific education alongside Quranic and religious teachings.

Wizarat believes that religious affinity is also a big reason for widespread joy in Pakistan. Muslims in the country have the feeling that the US targeted Islamic countries only in the past three decades, she said. Iraq, Libya and Syria were secular, but even then they were targeted for being Muslim, she said, adding that now the tormentor of these Muslim states has faced a humiliating defeat, which adds the jubilation that many Pakistanis feel.

The JUI-F is more expressive over this religious affinity. It is not only a victory for the Taliban, the party's leader, Maulana Jalaluddin, believes, but one for the entire Islamic world. People from Egypt to Palestine are celebrating it and our workers also offered special prayers for the Afghan Taliban, he said.

Some Pakistanis, despite being opposed to the Taliban's ideology, have welcomed the fall of Kabul. For instance, a faction of the Communist Party of Pakistan, led by Jameel Ahmad Malik, said in a statement: "Whether one likes it or not, it is a fact that the Taliban have defeated American imperialism after 20 years of struggle."

What will happen to Afghan women? Studio talk with DW's Birgitta Schülke

He criticized those left-wing intellectuals who are not ready to accept the Taliban's victory.

Wizarat said a number of secular and liberal Pakistanis were also hailing the fall of Kabul. "Many educated Pakistanis believe that the US is an imperial power that was after the mineral resources of Afghanistan and that the tiny force of the Taliban has defeated a mighty empire that has attacked many poor countries in the past," she said.

Some critics believe that the Islamization instigated by dictator General Zia created a particular mindset that throws support behind every retrogressive group and outfit.

Karachi-based women's rights activist Mehnaz Rehman said that, as the Afghan Taliban are also retrogressive, there are sections of society that throw support behind them and are happy over their victory. "But we, as human rights activists, are concerned over the situation, which is a source of anxiety for us," she added.

Some critics believe that the Afghan Taliban are the project of the Pakistani establishment and the euphoria is also being created at their behest.

Sarfraz Khan, former head of Area Study Center of Peshawar University, believes that the media are being asked to exaggerate the successes of the Afghan Taliban.

Even liberal anchors are heaping eulogies on the Taliban because they want to appease the establishment, he told DW. The same is the case with religious parties, he said.

In recent years, the establishment was badly exposed in Pakistan, he said. With this victory, they want to improve their image among the people, he suggested.

Whatever the motive, not everyone is aghast at the Taliban's recent surge to power.

Afghanistan: Is it right to talk to the Taliban?

The international community is waking up to the harsh truth that once again, it has no clear strategy for dealing with the Islamists and the new reality emerging in Afghanistan.

Why the Afghan army folded to the Taliban

The Taliban's swift takeover of Afghanistan caught the West by surprise, as no one had expected that the Afghan government forces would not put up a fight and vanish into thin air so quickly.

Opinion: The German government must help journalists in Afghanistan

After the Taliban takeover, Afghan journalists should be permitted to leave the country as soon as possible. Women are in particular danger, according to Anne Renzenbrink from Reporters Without Borders.