Why the Afghan army folded to the Taliban

The Taliban's swift takeover of Afghanistan caught the West by surprise, as no one had expected that the Afghan government forces would not put up a fight and vanish into thin air so quickly. 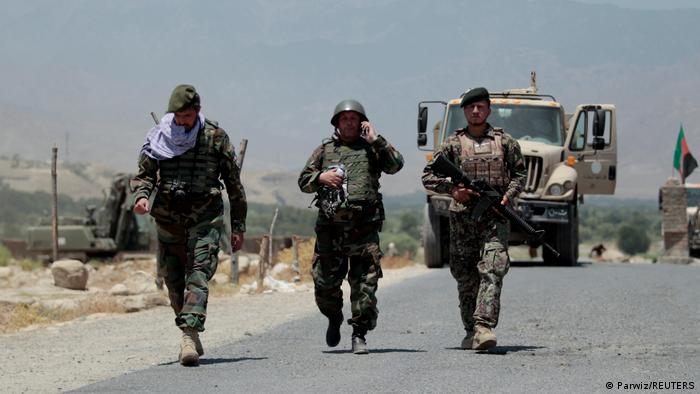 The Taliban have 80,000 fighters in comparison with over 300,000 soldiers working for the former Afghan government

US President Joe Biden on Monday addressed the nation to share his views on the deteriorating situation in Afghanistan and the Taliban takeover of the war-ravaged country.

As Biden justified his decision to pull all US troops out of Afghanistan, he blamed the Afghan leadership for not resisting Taliban advances in recent weeks.

"The truth is: This did unfold more quickly than we anticipated. So what happened? Afghanistan political leaders gave up and fled the country. The Afghan military gave up, sometimes without trying to fight," Biden said.

"American troops cannot and should not be fighting the war, and dying in a war that Afghan forces are not willing to fight for themselves," he added.

It is still puzzling for many observers how the Afghan army, which was trained and equipped by the US for two decades, could have surrendered to the Taliban so quickly.

From the perspective of size, the Taliban have about 80,000 fighters, in comparison with the more than 300,000 soldiers working for the former Afghan government. Yet, the militant group still overran the country within weeks.

There could be several reasons for this debacle.

Air power was a crucial factor in anti-Taliban operations over the past two decades. Though the Afghan forces conducted group operations, they could always count on the backing of NATO and US air support. With the withdrawal of NATO, Afghan forces on the ground were missing a key element on the battlefield against organized Taliban fighters.

US President Biden: 'I stand squarely behind my decision'

Mohammad Shafiq Hamdam, a Kabul-based security expert, told DW that Afghan security forces were financially and militarily dependent on the US, and were left exposed and vulnerable as the withdrawal progressed.

Without the support of the US and NATO backing up Afghan government troops, Taliban leaders knew that they could topple the government in Kabul, he added.

Afghan army was demoralized by US exit

This, however, does not conceal the fact that Washington spent about $83 billion (€70 billion) to train and equip the Afghan military, and that the local troops should have been strong enough, at least on paper, to counter the Taliban.

Many Afghans saw the 2020 US-Taliban deal in Doha , put together by the administration of former US President Donald Trump, as a signal that Washington was no longer interested in Afghanistan, which in turn demoralized the Afghan forces.

When Joe Biden replaced Trump as president in January, Afghan officials had hoped that the new US leader would give them some more breathing room.

In April 2021, Biden doubled down on Trump's plan of an unconditional withdrawal of all US troops from Afghanistan, and the US's NATO allies followed suit.

It is apparent that the Afghan administration was not ready for such a rapid withdrawal, and this was exacerbating by the fact that the Taliban had not agreed to a nationwide cease-fire and intra-Afghan talks were stalled.

According to a report by the US Council on Foreign Relations, the Afghan military has been "unable to provide vital supplies such as food and ammunition to outposts scattered around the country."

"Seeing the writing on the wall, most troops chose to cut deals with the Taliban, surrender or simply melt away rather than risk their lives for a hopeless cause," the report said.

It added that "some Afghan units, particularly elite commandos, fought hard nearly to the end."

Corruption within the army

Nongovernmental organizations and research groups have repeatedly reported about the rampant corruption in Ashraf Ghani's government.

According to The Washington Post's Afghanistan Papers project, out of the 352,000 soldiers and police counted as members of the Afghan security forces, only 254,000 could be confirmed by the former government.

Commanders not only created "ghost soldiers" to pad their payrolls but also skimmed the pay of serving soldiers and failed to deliver necessary supplies, the newspaper reported.

According to The Guardian newspaper, the US agency that monitors spending in the conflict reported that "free-spending ways" had enabled such corruption and that efforts to put a stop to it were "half-hearted and ineffectual."

"The question of whether that money was well spent will ultimately be answered by the outcome of the fighting on the ground, perhaps the purest monitoring and evaluation exercise," according to the agency.

A lack of ideology to fight for

Another reason behind the Afghan army's downfall was a lack of purpose, as loyalties to tribes or regions outweighed a sense of loyalty to a central government in Kabul. The Taliban, on the other hand, are united by a militant Islamist ideology.

Since 2001, when the US invaded Afghanistan and toppled their previous regime, the Taliban have maintained that they would not give up on their Islamic ideology and would go to any extent to oust "Western imperialists" and invaders from Afghanistan.

The paper-thin commitment to Kabul from the Afghan forces stationed throughout the country was aptly illustrated by Nadeem Farooq Paracha, a Pakistani media commentator.

Paracha points out that it took the Mujahideen three years to oust former socialist Afghan president Muhammad Najibullah after the withdrawal of Soviet troops in 1989, but Ghani's forces could not even last a month.