Afghanistan: Pakistan braces for more ′Islamization′ after Taliban victory | Asia | An in-depth look at news from across the continent | DW | 16.09.2021

In the late 1990s, Pakistan saw a surge in religious extremism when the Taliban came to power in neighboring Afghanistan. Would it be any different this time around? 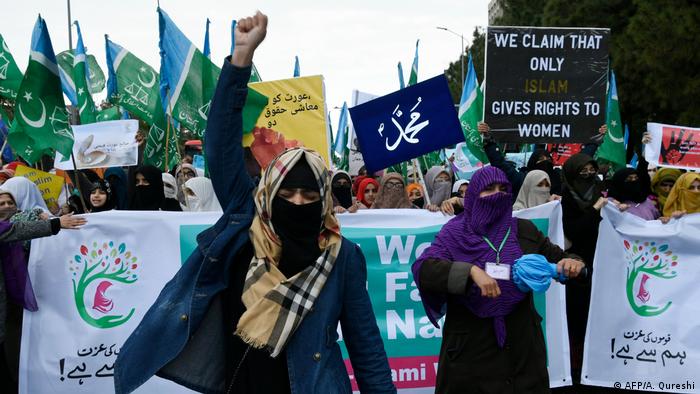 The Taliban's capture of Kabul in 1996 gave impetus to Islamist militant groups across the world, but the country that was most affected by the rise of fundamentalism in Afghanistan was its neighbor, Pakistan.

Not only did the victory of the "students" (the Taliban in Arabic) embolden extremist and militant groups in Pakistan, some people in the South Asian country also saw it as a "divine" sign.

Fed up with the country's mainstream political parties, who had failed to deliver to the common people, the demand for Shariah law and a Taliban-style government had started echoing across Pakistan.

Political Islam, thus, gained tremendous strength in the Muslim-majority country, and the hardline Wahabi version of Islam became even more popular due to the rise of the Taliban.

As the country's military establishment was backing the Islamists at the time, experts said the surge in support in Pakistan for the Taliban was a natural outcome of state policies.

Twenty years after the US and allied forces toppled the Taliban regime, the fundamentalist group is back in power in Afghanistan. Analysts say that Pakistan is bound to be affected by the Taliban triumph.

When the militant group first came to power in Afghanistan, Pakistan saw a sudden spike in jihadist outfits and religious seminaries. Sectarian clashes also increased sharply in the country, with militant Sunni organizations targeting members of the Shiite sect and other minority groups.

Raza says these tensions could escalate in the coming weeks. "The success of their 'ideological brothers' in Afghanistan has given them a boost," referring to Pakistani Islamist groups.

The withdrawal of US troops from Afghanistan and the subsequent Taliban takeover of the country has also reinvigorated the Tehreek-e-Taliban Pakistan (TPP), a group banned by Islamabad due to its violent attacks on civilians and security forces.

Islamabad has urged the Afghan Taliban to ensure that the TTP does not use Afghan soil to launch attacks inside Pakistan. Despite the Taliban's assurance, the TTP has already intensified its attacks on Pakistani troops.

Analyst Said Alam Mehsud said that he believes terrorist attacks are likely to increase not only in northwestern areas of Pakistan but across the country.

Religious groups are demanding the imposition of Shariah law in Pakistan more vigorously than before.

In the late 1990s, religious parties took to the streets to force former premier Nawaz Sharif to introduce more Islamic laws. Experts say that extremist parties could launch a similar campaign to further Islamize the country.

Hafiz Hussain Ahmed, a former parliamentarian and leader of the religious Jamiat Ulema-e-Islam party, told DW the victory of the Afghan Taliban would have a positive impact on Pakistan and the region. "The demand for the imposition of Shariah would gain momentum," he said, adding that the country was created to uphold Islamic values.

"There is no harm if Shariah is imposed here as well," he added.

Kishwar Zehra, a Pakistani legislator, told DW that some religious groups, spurred by the Taliban triumph, have already started campaigning against liberal groups and women activists.

"I think they have the power to pressure Prime Minister Imran Khan's government into passing retrogressive laws," she added.

Khan's center-right government is already facing criticism for cozying up to religious extremists and introducing regressive legislation in parliament.

Khan, who has long supported the Taliban, has been severely criticized for his "misogynistic" views. In June, he faced backlash following comments that appear to put the blame for sexual abuse on women.

"If a woman is wearing very few clothes, it will have an impact on the men, unless they are robots," Khan said during an interview for news website Axios, aired by US broadcaster HBO. He proceeded to say that this was "common sense."

Khan had made the comments roughly two months after a similar controversy. During a question and answer briefing with the public, Khan had said that the rise in sexual violence in Pakistan was due to the lack of "pardah," the practice of veiling, in the country.

"The civil society is opposing the 'Talibanization' of Pakistan, but unfortunately the state is supporting them. It could result in increased suppression of journalists and NGOs," Asad Butt, vice chairman of the Human Rights Commission of Pakistan, told DW.