Afghanistan: Girls′ education faces bleak future under Taliban rule | Asia | An in-depth look at news from across the continent | DW | 23.09.2021

Even though the Taliban's reliance on foreign aid money could moderate their stance toward women, higher education for girls and women in the country still faces many challenges. 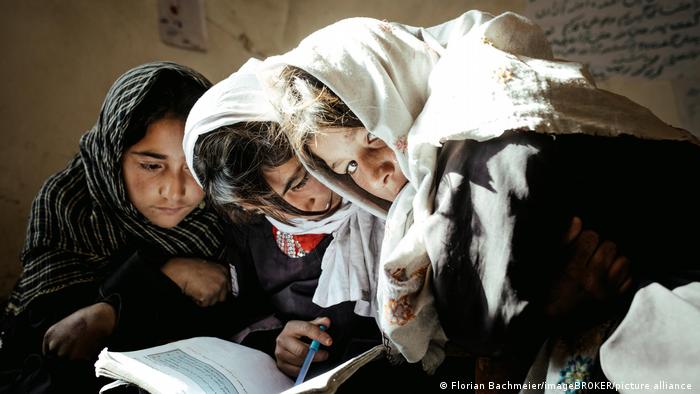 The Taliban have vowed to respect women's rights "within Islamic law," but it's not clear what that really means for Afghan girls

Girls in Afghanistan will have to wait longer to resume studies at secondary schools after the Taliban announced this week that first the group must "finalize things." They will then allow girls to return to the classroom "as soon as possible."

"In the case of schools (for female students), the Ministry of Education is working hard to provide the ground for the education of high school girls as soon as possible, work is under way on the procedure, and it is hoped that this will be done, God willing," Taliban spokesman Zabihullah Mujahid told reporters at a news conference in Kabul on Tuesday.

The statement came after the Education Ministry said last week that boys' secondary schools would soon reopen but made no mention of schools for girls. That triggered sharp international criticism. Conflicting statements about the closure of high schools for girls also caused additional confusion.

"The Taliban are divided and do not have a unified position at the moment, especially when it comes to women's rights," women's rights activist Kobra Balooch told DW from Afghanistan.

"Different rules prevail in different parts of the country right now, depending on whether the more radical wing of the Taliban or the more pragmatic wing is in charge there," Balooch said.

The activist points to the Balkh province as an example of how the situation is playing out on the ground. "Secondary schools for girls were already opened there last week," said Balooch.

Afghans fleeing conflict and drought in urgent need of aid

The two faces of the Taliban

Before the Taliban seized power in mid-August, Balooch had been working for a nongovernmental organization focused on coordinating civil society groups and promoting women's rights.

Many of her colleagues have left the country out of fear of the Taliban. She says that the work she and other activists have done for many years has made a lasting difference in society.

"There are things that can no longer be taken away from us, like for instance education for girls and women. If you were to exclude them from education, it would massively upset a lot of Afghans," said Balooch.

"I think a section of the Taliban right now is avoiding unnecessary provocation and confrontation with civil society," Balooch said. "They want to win the recognition of the world community and get aid money. But, at the core, the Taliban have not changed. They still reject participation of women in public life."

The Taliban unveiled their interim government two weeks ago — without any participation by women.

Female civil servants and government employees were sent home, and the Ministry of Women's Affairs was abolished.

Instead, there is now a "Ministry of Virtue." When the Taliban were in power the last time, from 1996 to 2001, this ministry was responsible for flogging women, among other things. Afghan women were banned from public life during this period. They were only allowed to leave the house when accompanied by male relatives. Women who traveled alone faced whipping as punishment.

The Taliban leadership this time around have attempted to portray themselves as more moderate than when they imposed the harsh form of Islamic rule in the late 1990s. They vowed to respect women's rights "within Islamic law"— though it's not clear what it really means for Afghan girls and women.

The group's announcements have been viewed as an attempt to reassure other nations, whose financial support Afghanistan relies on.

The result could be that women are allowed to study at Afghan universities, albeit segregated from male students and in compliance with the Islamic fundamentalist group's radical interpretation of Sharia.

"At the moment, we are taught between 1 p.m. and 4 p.m. Our male fellow students sit in the lecture halls in the morning and late afternoon," Sahar Akbari, a 25-year-old journalism student at Kabul University, told DW.

No salary for women

In science subjects, where work is done in the lab, or in engineering departments, where there are far fewer female students, gender segregation becomes extremely difficult. The situation could force many female students to consider whether it's worth studying at all.

"I don't know if I'll ever be able to earn money," Akbari said, pointing out that most female employees nationwide have been unable to resume work since the Taliban takeover.

"Those who are still allowed to work, such as female doctors, are not being paid," she said.

Activists and women's rights activists are calling on donor countries to attach strict conditions to aid payments they make to the Taliban-led government, which desperately needs financial assistance from abroad.

Afghan women fight to retain their places in society

The international community has limited scope to put pressure on the Taliban through conditional aid payments, as Afghanistan faces an increasingly dire humanitarian situation.

The economy of the conflict-torn nation — one of the poorest in the world — has been on the brink of collapse since the withdrawal of foreign troops.

Last year, Afghanistan's total economic output amounted to about $20 billion (€17 billion) and, according to the World Bank, foreign aid money accounted for almost 43% of that figure.

More than half of the approximately 39 million Afghans are in need of humanitarian aid, food, drinking water, medical care and shelter, Simone Pott, spokesperson for the German NGO Welthungerhilfe, told DW in early September.

She underlined that one in three Afghans is suffering from hunger at the moment. The nation has also been experiencing a severe drought.

"It is the duty of the international community and countries in the region to establish diplomatic relations with the new Afghan leadership," Taliban spokesman Mujahid said Tuesday, when he announced appointments for several deputy ministers — none of whom were women.

"We are trying to strengthen the Cabinet further, and, God willing, women will be appointed to certain positions in the necessary sections, and one day we will announce [their names] here," he said.

It is up to the international community, women's rights activists say, to keep reminding the Taliban that Afghanistan will have no future without the participation of women.