Afghan women risk losing their rights in a new political setup | Asia | An in-depth look at news from across the continent | DW | 08.03.2021

As the Taliban consolidate political power, Afghan women are worried about freedom and safety. A government negotiator in Kabul says women's rights need to be on the agenda for the future. 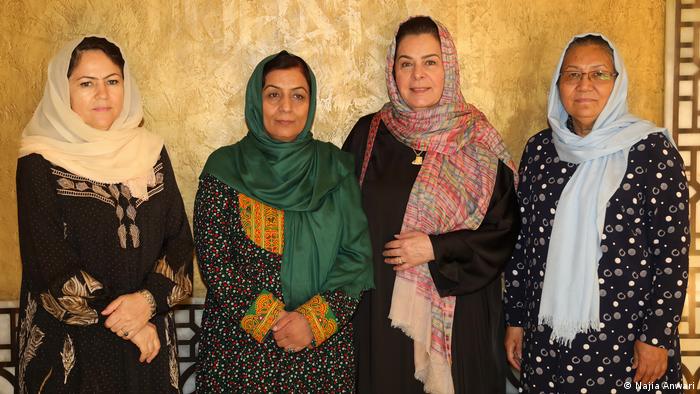 For nearly two decades, women in Afghanistan have played an active part in social and political life by holding political office, working in professions and running businesses.

Advances for women have extended from the country's elite in the cities all the way to the less-privileged communities in the provinces.

However, Afghan women now fear their place in society will again be marginalized as the Islamist militant Taliban consolidate their power under a peace deal with the US.

There are big questions about how the social landscape in Afghanistan will shift under Taliban influence, and what conditions will be forced upon women.

Fawzia Koofi, a member of the Afghan government delegation negotiating with the Taliban, said it is difficult to determine how the Taliban have changed nearly 20 years after being removed from political power. Afghanistan, however, has turned into a different country.

"When they [the Taliban] get to know the new Afghanistan and see the media, the youth and a dynamic society, the question is how much can they mentally endure these social changes? That will only become apparent in the course of time, " she told DW.

For intra-Afghan peace to succeed, negotiators say it is necessary that all guarantees for a civil society continue to exist.

This includes human rights and constitutional advances, such as a female quota of 25% of seats in parliament and freedom of religion.

Women's rights vs. the Taliban

Afghan women also want to make sure their hard-won rights are not left behind in negotiations with the Taliban.

In meetings with Taliban negotiators, Koofi has insisted that Afghanistan's parliamentary system be preserved.

According to Koofi, the Taliban have said they care about the role of women within an Islamic system and within the framework of Afghan traditions. This presumably indicates that women could face more restrictions under the Taliban.

International forces are discussing how to remove forces from Afghanistan under the US-Taliban Doha deal. But as an April deadline approaches, violent attacks have increased.

Women have also become the target of extremist violence. Last week, three female journalists and a doctor were killed in separate attacks in eastern Afghanistan.

Shukria Barakzai, a former Afghan parliamentarian and current diplomat, told DW that the peace process with the Taliban had not yielded any results and that attacks had only increased since the Doha deal was signed last year.

"Violence in Afghanistan has increased, with attacks on civil activists, women's groups and the media. This is not a good message to the Afghan people and the international community," Barakzai said.

What advances have women made?

Romina Osmani runs a women's services organization in Afghanistan's western Herat province. She said rural Afghan women have a lot to lose if their rights to education and employment are taken away. Osmani has spent years educating women in a job training center.

"We try to find work for women in remote districts in western Afghanistan. Some now have small businesses and can sell their products and earn an income," Osmani said, adding she remains optimistic for peace and will continue her work despite the recent increase in violence.

"Despite all the challenges and the numerous problems, our women's center has always been active and has achieved a lot," she said.

Fereshta Yaqubi is an example of a woman who has worked to improve her own situation and has fought for personal freedoms.

She has worked jobs in various government offices and got her driver's license six months ago. Since then, she has become more independent.

"I drove unveiled in my own car in a city where our family is well-known, although my family is rather conservative," she told DW, adding that she wants to break taboos and stereotypes.

This includes choosing her own husband. However, she needed permission from her conservative family first, which isn't to be taken for granted in Afghanistan.

Former Afghan parliamentarian Barakzai said that peace in Afghanistan will take a long time because the Taliban are more interested in seeing US and Western forces leave the country than they are in securing peace with the government in Kabul and the Afghan people. This doesn't portend a positive future for women's rights.

"The Taliban have said from the beginning, that they don't accept or respect women," Barakzai said. "They have no women on their negotiating team, and they see women's issues only as a problem."

"Either they are afraid of empowerment for women in Afghanistan, or they do not regard women as human beings, even if they were raised by mothers, and have sisters and daughters in their families," she added.

Barakzai said she doesn't expect the peace process to work long-term without women's participation. This is also due to the dominance of patriarchal structures in Afghanistan's government and society.

Negotiator Koofi said that women were not seen as "meaningful participants" in the Doha talks, even though the results of the talks will have a major impact on the rights of women in Afghanistan.

She added that the Taliban saw the small contingent of women negotiators in Doha as a "symbolic" sign that Afghanistan was trying to show that there is "social diversity" in the country.

However, Afghan women continue to play an integral role in Afghan society and hope for international support for women's rights as negotiations for the future of the country continue.

Opinion: 'As an Afghan refugee in Iran, I grew up with fear and humiliation'

Journalist Zahra Nader recounts her experience as an Afghan refugee in Tehran. She told DW that the bias and prejudice she faced in the 1990s still exists today.