The women, who dubbed popular Turkish and Indian dramas at a local broadcaster, were gunned down in the province of Nangahar. 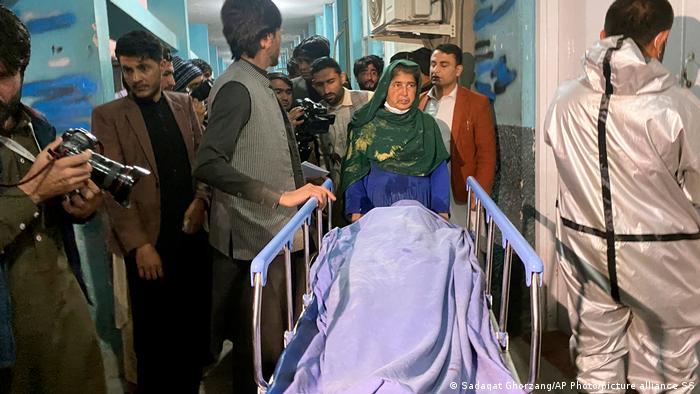 The three victims worked at Enikaas, a local broadcaster

Three women who worked for a local Afghan radio and TV station were shot dead in the eastern city of Jalalabad on Tuesday, government officials said.

Zalmai Latifi, director at Enikass TV, said the women were gunned down in two separate attacks after leaving the station.

"They are all dead. They were going home from the office on foot when they were shot," Latifi told news agency AFP, adding that all three women worked in the dubbing department at Enikass.

The broadcaster identified one of the women as Mursal Wahidi. The other two have been identified only as Shahnaz and Sadia.

The three women dubbed popular dramas from Turkey and India into Dari and Pashtu, according to a Enikass worker.

The attacks come amid a wave of killings targeting journalists, civil society workers and mid-level government employees in recent months, spreading fear among many professional workers.

Who was behind the attacks?

However, the "Islamic State" (IS) group on Wednesday claimed it was responsible.

The group, which often claims responsibility for terrorist atrocities, has a presence in the province of Nangahar, of which Jalalabad is the capital.

In December last year, an IS affiliate claimed responsibility for the killing of another female Enikass staff member.

Nangarhar police chief Juma Gul Hemat on Tuesday said an armed suspect was taken into custody after the attacks and that authorities were still looking for other suspects.

"He has admitted that he carried out the attack," said Hemat, adding that the detained suspect was a member of the Taliban.

However, the Taliban, which signed a peace deal with the US last year and is in talks with the Afghan government, denied involvement.

The Afghan government regularly places the blame for acts of terror squarely on Taliban militants.

Afghanistan is considered one of the most dangerous countries in the world for media workers, according to the United Nations.

At least 65 media professionals and human rights activists have been killed in a series of targeted killings across Afghanistan, from 2018 through the first month of this year, the UN reported in February.

"The targeted killing of journalists could cause a state of fear in the journalistic community, and this could lead to self-censorship, abandonment of media activities, and even leaving the country," Mujib Khalwatgar, head of Afghan media advocacy group Nai, said on Tuesday.

He said female journalists in Nangahar might have to refrain from going to work in the aftermath of the shooting due to heightened security risks.

"Afghan women have been targeted and killed too often ... This must stop. Stop killing civilians and destroying [Afghanistan's] future," she wrote on Twitter.

According to its website, Enikass Radio and TV is a privately owned outlet that broadcasts "news, various political, social, Islamic, educational, satirical, and engaging programs and standard dubbing of serials and movies for the people of Afghanistan."