Opinion: 'As an Afghan refugee in Iran, I grew up with fear and humiliation'

Journalist Zahra Nader recounts her experience as an Afghan refugee in Tehran. She told DW that the bias and prejudice she faced in the 1990s still exists today. 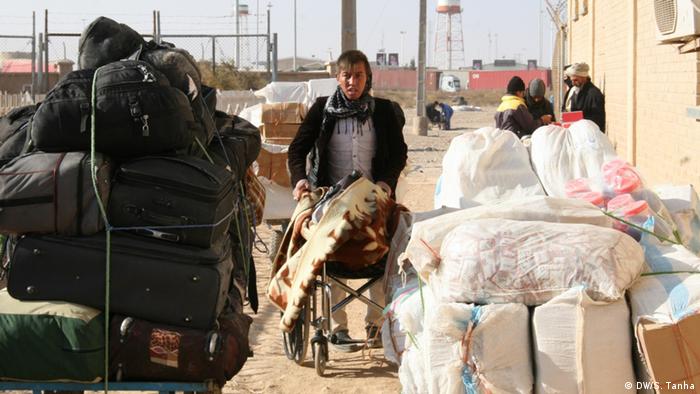 Whenever I read about the situation of Afghan refugees in Iran, it reopens old wounds of trauma, fear and humiliation that I experienced as an Afghan refugee in Iran.

In the mid-1990s — when my home region in Afghanistan, Hazarajat, was under Taliban control — my parents were forced to immigrate, and Iran was the only country they knew.

When we arrived in Jafar-Abad, a poor neighborhood in Karaj near Tehran, I was about 7 years old — the age children are supposed to attend school. My mother took me to several schools within a few months of our arrival. They all rejected me.

I am not sure what our immigration status was. But the papers my father said we had meant nothing to the school officials who denied my right to education.

One evening when I was 9, my teenage brother — who was working two shifts in a glass factory — came home with good news. An Afghan-run school for Afghan refugees had opened nearby. I was thrilled and couldn't sleep that night. My mind raced: how should I address the teacher? Do they have uniforms? Like the one that Iranian children have?

When the day finally arrived, my older sister, Massoma, and I started school in our everyday clothes. No uniform. The class was full of Afghan students and everyone sat on the floor in four rows. I sat in the first row facing the teacher: Zahra, also an Afghan refugee.

A month into our schooling, my mother notified us that we could no longer attend. My father and brothers' daily wage could barely cover rent and food.

That night — under my blanket — I cried quietly. I promised to say goodbye to school, and with that, to all my dreams, but I never succeeded.

Now that I was not attending school, I was assigned to bring "barbari" bread from a bakery in Qale-Yadullah twice a day. One afternoon, on my return trip from the bakery, an Iranian girl — the same age as me — stood on my way. I was wearing a black scarf with a golden-color margin. "Give me your scarf," she demanded. I was shaking and holding four warm loaves of bread tied to my chest. My reasons for not giving up my scarf didn't satisfy her. She repeated, "give me the scarf!" I could see my house from where we stood and I summoned all my courage and escaped. She ran after me for a few meters, then stopped and shouted: "Nasty Afghan, I will see you tomorrow."

For the next few days, my mother escorted me through the girl's neighborhood. Later, it became clear that she wasn't the only one who enjoyed bullying an Afghan kid. I adopted their accent when speaking Farsi to avoid detection, but that didn't help. Even in the bakery line, among adults, I wasn't safe; Iranian women would pull me out of the line to take my spot.

'That day I gave up'

One particular incident in Abasabad, a city on the Caspian Sea northeast of Tehran, changed me forever. It was around noon and I was returning home from a store. A few teenaged Iranian boys were playing soccer in the street. One of the players kicked his soccer ball hard into my right ear. I felt pain and numbness and then couldn't hear anything. I cried and ran home. The boy was our neighbor, living at the end of the street. My mother took me to their door. His mother was calm and she didn't say anything. Instead, the other neighbor, whose son was also playing soccer that day, stood in front of us and shouted, "How dare you came to our door? This is Iran; I wish my son had hit your daughter so that I could throw your belongings out on the street. You nasty Afghan, go back to your country."

She said more, but my left ear couldn't capture it all. That day, I gave up. My hearing came back the next day, but I was no longer yesterday's teenager.

I never complained to my mother ever again. I promised to keep silent in the face of racism and injustice, so no one could scorn my mother. I kept that promise for years. But I broke it today. Since 2003, I have not been to Iran, but I still carry that feeling of fear and humiliation.

When we left Iran, one of my cousins who lived with us in a compound had a two-year-old daughter named Zahra. They are still living in Iran and she is lucky enough to attend a public school.

When I spoke with the now 19-year-old Zahra, I asked her about her hopes for the future. She started answering in the past tense, "I would have loved to be a doctor. I was working hard to get good grades for that, but when I started seeing that Afghans cannot afford to go to university, my hopes turned to despair."

Listening to Zahra's story, I understood that life for Afghan refugees hasn't changed much. She said: "One of our Iranian neighbors lost his phone on the street. He came to our door, but we were not home. Only my youngest brother, Hussain, was home. He beat Hussain and accused him of stealing his phone. Then he threatened and cursed us and said he'd seen Hussain stealing his phone. The next day, an Iranian neighbor who found his phone on the street, returned it."

Zahra is going to graduate high school next year, but she can't imagine going to university. "Even if I get good grades and pass the Kankor examination, I still need to pay additional tuition, because I am an Afghan refugee." Her father and her mother are both working in agriculture, cultivating, and planting lettuce.

"It is all useless if I can't see how get ahead. I have lost my motivation," she said.

Zahra Nader was a journalist at The New York Times.

Read more: Opinion: Time for Africa to rid itself of racist colonial relics