Afghan migrant to sue Greek coast guard over son′s drowning | Europe | News and current affairs from around the continent | DW | 18.03.2021

A refugee charged over the death of his son is preparing to take the Greek coast guard to court. He says they delayed the rescue — and accepted that people would die. 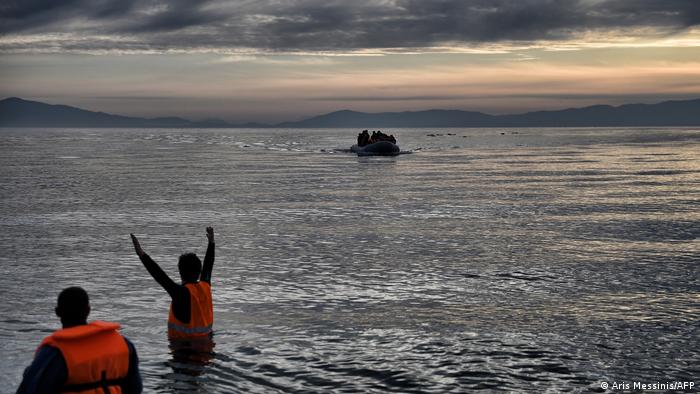 Greece is coming under fire for its alleged pushbacks against refugees

Almost everyone in the rubber dinghy made it to the coast of the island of Samos that night in early November 2020. Only 6-year-old Rafi* did not survive the journey. The boat he was in with his father Naser* and a group of other refugees hit a rock and capsized. The group reportedly waited for help for hours.

Many questions remain unanswered about what happened that night, says Dimitris Choulis. The lawyer represents 26-year-old Naser, the Afghan asylum-seeker who is preparing to sue the Greek coast guard for failing to provide assistance. He is still waiting for the prosecution in Samos to deal with the matter, as the COVID-19 pandemic is causing delays at the court. However, when the lawsuit is filed, this will mark a first in Greece.

What makes Naser's case so extraordinary is that he, in turn, is being investigated for his son's death. The public prosecutor's office is investigating the man for endangering a child, resulting in death. If convicted, the man faces five to 10 years in prison. This is the first such case but possibly not the last, as Prime Minister Kyriakos Mitsotakis' conservative government seems to be toughening the country's refugee policies. 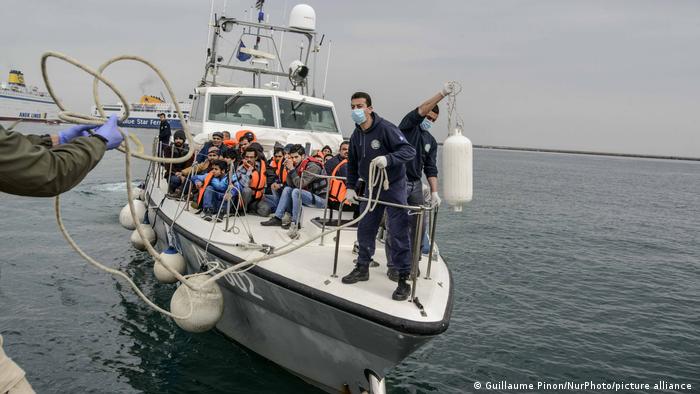 The United Nations refugee agency UNHCR is worried about developments in Greece. Greece's stricter border regime that was launched last year has been accompanied by credible allegations of pushbacks, UNHCR spokeswoman Stella Nanou told DW. The agency urges Greek authorities to investigate such "extremely disturbing allegations" and to ensure the basic right to asylum.

In pushbacks, migrants or refugees are taken right back behind the border they last crossed, which denies them the chance of an asylum process. While the European Court of Human Rights has ruled that as such, pushbacks are not illegal, critics argue they violate accords including the Geneva Refugee Convention and the European Convention on Human Rights. The Greek coast guard, the EU's Frontex border management agency and border authorities of other EU states have been accused of several cases of refugee pushbacks.

That is the case Naser and his lawyer are making against the Greek coast guard. "We believe that they tried to seal off the area and gather everyone on the coast in order to carry out a pushback from there," says Choulis, adding that is why they deliberately delayed any rescue efforts. 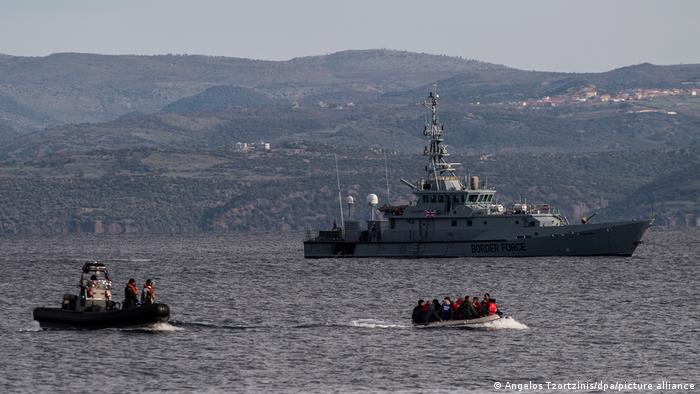 Tossed out of the dinghy in a storm

On the night of November 7, Naser and his son left Turkey, crowded into a small rubber dinghy. Their request for asylum in Turkey had been rejected, now they were headed for Europe: the Greek island of Samos, which is so close to the Turkish mainland. After about two to three hours, a storm hit. "One side of the boat was completely under water, the other side was hanging in the air," Naser remembers. "The boat hit the rocks several times. I don't remember what happened after that — just that at some point, I was in the water."

The journey ended in northeastern Samos, at Cape Praso, a spit of land with steep cliffs that jut into the sea, impassable terrain. Tossed out of the sinking boat, Naser managed to cling to a rock but he never learned how to swim, and the waves kept pushing him underwater. At some point, someone pulled him onto the rocks. That is when he realized that his son, whom he had been holding in his arms, was gone. Other people were also missing, including a woman eight months pregnant.

The first distress call went out at 11:51 p.m., a WhatsApp message to Aegean Boat Report, an NGO that records emergencies at sea, forwards them to the authorities and documents rescue measures — with the aim of maintaining a degree of public pressure and preventing pushbacks.

The Greek coast guard said it received a distress call from Aegean Boat Report at 00:06, along with the group's GPS coordinates and the sender's phone number. What happened next remains unclear. The coast guard claims it immediately sent boats to the scene of the accident. During a control call by Aegean Boat Report at 01:18, the refugees said no help was in sight, the NGO told DW.

That night, two boats appeared at the site of the accident, Naser says. "They shone spotlights on the sea and on the shrubs on land," he says. "They just drifted there." He unsuccessfully tried to get their attention, says Naser, adding that the captains of the boats must have seen the refugees. The group first came in contact with Greek officials when a few refugees decided to go inland to get help. Led by Naser, they met coast guard officials at dawn, a contact a coast report confirmed to have taken place at 06:40. By then, Naser's son Rafi had been missing for more than six hours.

The coast guard did not get involved until the morning hours, argues Dimitris Choulis. Frontex confirmed to DW that it was not informed about the emergency, nor was assistance requested. The coast guard in Samos, which was responsible for the operation, declined several interview requests. A spokeswoman merely told DW that the coast guard works "professionally and in compliance with human rights." She wrote that they are often the victim of unfounded attacks in the social networks, the media and from NGOs.

A version of the incident that veers from the official report and that raises questions was printed in The New York Times in November. According to coast guard chief Dimitris Tsinias, the pregnant woman missing from the group was found at 03:00; the boy Rafi was discovered at 06:00 in the morning. The official coast guard report only mentions the heavily pregnant woman and the dead child were taken to the port of Vathy at 9:30 a.m. If they were found hours earlier, why wait before bringing them in?

The boy's postmortem report raises even more questions, says Choulis. Rafi's body was examined by a forensic pathologist only days after the accident. She dated his death at 23:45 on the night of the accident — exactly 21 minutes before the emergency call went out at 00:06. 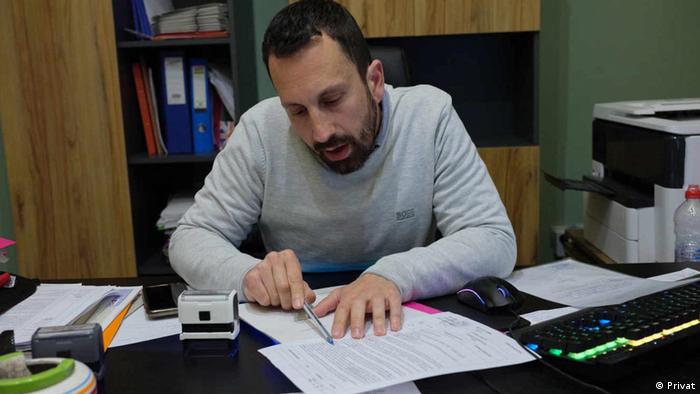 Dimitris Choulis does not believe in coincidence. "This means there is a small window of opportunity that lets the coast guard off the hook," he argues. According to an expertise the lawyer ordered, the exact time of death cannot be determined days later, let alone with such precision. The autopsy report and the expert opinion were not made available to DW; the results were communicated via the lawyer.

Naser was questioned by the police for hours after his son's body was recovered. Sick with worry, he repeatedly asked about Rafi, he says. The officers assured him that the child was fine and that he could see him after the interrogation. Then they finally told him the truth: that his child was dead.

Naser's lawyer managed to get him out of custody, which allowed Naser to attend his son's funeral. Naser must remain on the island as long as the criminal proceedings against him are ongoing. His lawyer is confident he will face no more than a short suspended sentence; perhaps the case will be dropped altogether — the incident has made too many waves already.

These past few months have scarred Naser, Choulis says, adding that the Afghan asylum-seeker has many questions. Why did no one help him and his son that night? "If my life is not worth anything to them because I came here illegally, then they could have simply deported me again," says Naser.

For the time being, that is unlikely. Naser's asylum procedure is almost completed. He is waiting for documentation for subsidiary protection. All he wants is to get away from Samos, away from the terrible memories, to go somewhere where he can live and work in peace and quiet.

Germany to take in some 1,500 migrants from Greece

Angela Merkel's government has said Germany will take in additional migrants from Greece and in particular Lesbos. More than 12,000 people were left homeless by fires at the refugee camp Moria.