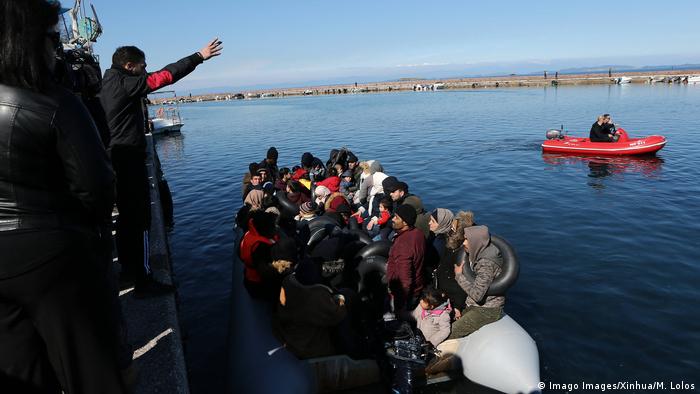 The demand follows revelations that since April, six migrant boats have been forced by Greek coast guard ships to return to Turkey, with allegations of risky maneuvers and outboard motors being damaged in an attempt to illegally block access to asylum.

Read more: Greek migration minister: 'We are protecting our borders in line with international law'

"Germans must on no account be involved in pushbacks, not even indirectly," Schwabe told newsmagazine Der Spiegel and ARD public television's investigative Mainz Report on Saturday.

If Frontex, the EU's external border agency, did not stop the involvement of German federal police units in such pushbacks, then "the German contingent must be withdrawn," insisted Schwabe.

Citing an internal Frontex letter to the European Commission on Saturday, the magazine said federal police on board the German patrol boat BP62 reached an overloaded inflatable boat inside Greek waters on the morning of August 10.

Instead of immediately rescuing some 40 persons on board, the patrol boat blocked the occupants' route to the adjacent Greek island of Samos and waited half an hour until the Greek coast guard "took over" the incident.

Der Spiegel said that Frontex chief Fabrice Leggeri, in an internal report to Brussels, had written that the migrant boat turned back to Turkey upon the arrival of the Greek coast guard, which later documented the occurrence as an "obstructed entry."

German police assigned to Frontex did not even file a "serious incident report," claimed the magazine.

"Frontex must in the meantime assume that the Greek coast guard is carrying out illegal pushbacks," said Constantin Hruschka of Germany's Max Planck Institute for Social Law and Social Policy based in Munich. "In such a case, Frontex must ensure that this does not happen and that the refugees are given access to an asylum procedure."

Last week, the 47-nation human rights body the Council of Europe (CoE) slammed what it called "credible" allegations that Greece had carried out pushbacks across its border with Turkey, including forcing migrants on land to re-cross the Evros River.

In a report compiled by its anti-torture committee , the CoE raised concerns "over acts by the Greek Coast Guard to prevent boats carrying migrants from reaching any Greek island," questioning the "role and engagement" of FRONTEX in such operations."

Greece experienced a 90% drop in arrivals from May to October 2020, compared to the same period last year, the Greek Migration Ministry said last week.

Is the EU an accomplice to Croatian police brutality?

The NGO is launching an additional vessel amid a spike in the number of migrants trying to cross the Mediterranean Sea. Some 900 people have drowned making the treacherous journey from North Africa to Europe.