Hamburg headed to the polls on Sunday to vote for the state's parliament for the coming five years. Germany's euroskeptic Alternative for Germany (AfD) party could potentially win seats in its first western state. 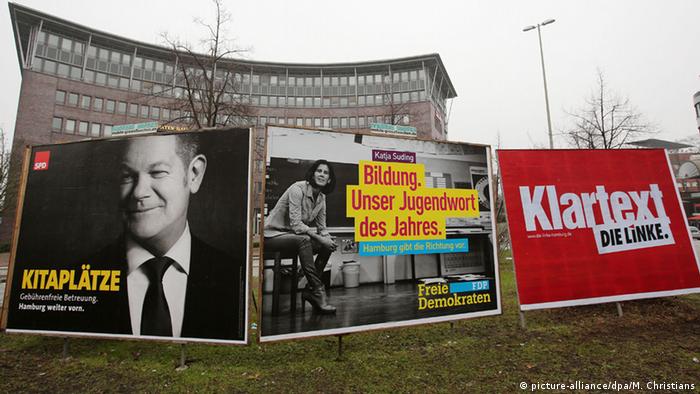 With its bustling port and cluster of media and aerospace companies, the port city state has long been a stronghold for the SPD.

According to recent polls, however, repeating their absolute majority success of four years ago will be no easy victory, even if they defeat the conservative CDU.

Threatening the absolute majority ruling of the SPD are the smaller parties such as the liberal FDP and right-leaning AfD.

Taking advantage of renewed fears over the eurozone and Greece's new anti-austerity government, euroskeptic AfD could now be in with a chance of winning its first seats in a western German state.

The party's success has thus far been limited to eastern Germany where it currently holds seats in three states.

Ahead of Sunday's vote, AfD, which was founded in early 2013 to oppose eurozone bailouts, had been polling between 3 and 6 percent. They will need to reach the required 5 percent threshold, however, to have any hope of entering the regional assembly.

According to the most recent polls, SPD has the support of 47 percent of the 1.3 million eligible voters, leaving the party just short of an absolute majority.

Come Monday, Mayor Scholz could therefore be forced into a coalition. The respected centrist previously said he would prefer a red-green state government if the measure became necessary.

Hot issues in the run-up to Sunday's election included housing shortages, improvements needed in education and plans to further deepen the Elbe River.

Sunday's vote was the first of two regional elections in Germany this year, with the second scheduled for May 10 in the northern city-state of Bremen.

As the Alternative for Germany (AfD) party conference began, its chairs refuted accusations of discord in the leadership. But disagreement was rife elsewhere at the conference, reports Elizabeth Schumacher from Bremen. (30.01.2015)