What′s behind Germany′s far-right AfD party slump in polls? | Germany | News and in-depth reporting from Berlin and beyond | DW | 10.10.2020 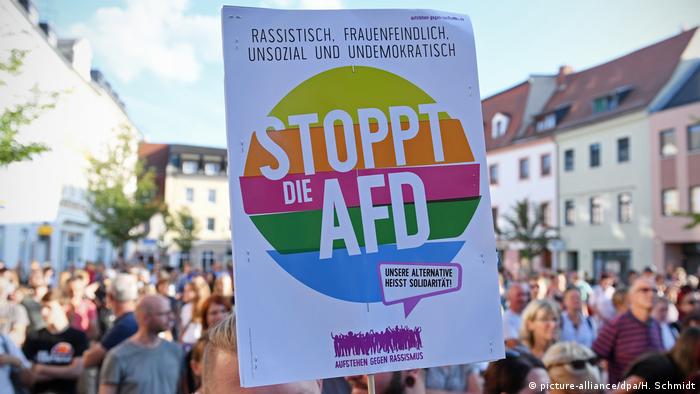 German media were abuzz this week after the latest poll by the Kantar research institute suggested that in just a year, the far-right populist AfD had dropped from first to third position in eastern Germany — the party's longtime stronghold. Compared to October 2019, support for the AfD in eastern states had fallen from 24% to 18%, putting it behind Angela Merkel's conservative Christian Democratic Union (CDU) and the Left party. 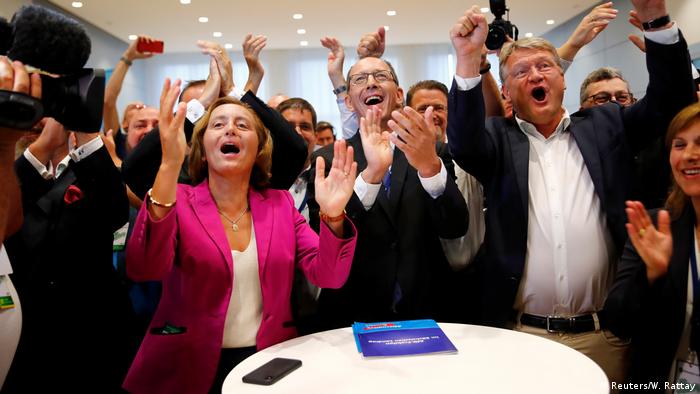 Happy days: A year ago AfD leaders had reason to celebrate their election success in Saxony

There are several reasons for this development, says Funke. Firstly, he says several high profile violent events in 2019 changed the political discourse.

"Since then, there has been a broad discussion across Germany's about a connection between agitation by the AfD and other far-right activists and racist violence, anti-Semitic violence," Funke says.

Another major factor in the AfD's loss in support is party infighting which has played out publicly in recent months in a spate of scandals that have highlighted the far-right extremist streak running through the party.

Over the six years of the party's existence, the AfD has become all too familiar with scandals surrounding Holocaust deniers and far-right extremists. More recently, in May, Andreas Kalbitz, former AfD state leader in the eastern state of Brandenburg, was expelled from the party for his past connections with a neo-Nazi youth movement. Just last month, former party spokesperson Christian Lüth was firedafter reportedly saying migrants could be "shot or gassed."

In an attempt to balance out the party's far-right image co-leader Jörg Meuthen, after weeks of hesitation, has expelled some leading figures who had been touting extremist ideology and had a strong following for exactly that reason.

The rift between the moderate and extreme far-right in the AfD has widened — and the last of the more moderate euroskeptics, who were the backbone and founding members of the AfD, are now leaving.

"The AfD is now characterized by in-fighting, where everyone is pitted against the other," AfD co-founder Konrad Adam told public broadcaster ZDF this week. "I don't think the party has a future like this, and that is why — admittedly, after hesitating to do so for a long time — they have decided to now leave the party."

The AfD's development is not surprising and follows a pattern, says Funke. He points to similar developments in the anti-migrant Republikaner party in the 90s, and the ultranationalist NPD.

"Whenever parties to the right of the CDU/CSU on the political spectrum — in this case, the AfD — become radicalized and more extreme, then they start losing support," he explained.

So where are the disillusioned AfD supporters going?

Uwe Kamann was elected to the Bundestag for the AfD in 2017. By December 2018 he had quit the party and the parliamentary group, choosing instead to be an independent member of parliament.

"I witnessed how the party slipped further and further to the right and that it was no longer possible to stop that trend," Kamann told DW.

The latest surveys indicate that AfD voters are also turning away to the CDU or returning to the Left party, which was the home for the East German protest vote against the old West German establishment before the AfD came along.

Kamann, however, is worried that the disenchanted AfD voters might not migrate to other parties, but decide not to vote at all. The far-right populists had recruited a large part of its voter base from the non-voter camp.
The solution, Kamann says, is a party to fill what he sees as "the liberal-conservative gap" in Germany’s political spectrum.

While the conservative CDU has become less conservative during Merkel's 16 years in office, the business-friendly Free Democrats (FDP) have failed to sharpen their profile as conservative liberals and are facing an uphill battle to secure their place in parliament in the next federal elections. Kamann earlier this year decided to join the Liberal-Conservative Reformers (LKR) — established in July 2015 as a split from the AfD.

The special case of East Germany

While the AfD has become "too far right" for some voters, support is not waning across all of East Germany, where the south is traditionally especially conservative.

In Saxony, the southernmost eastern state, the AfD is still polling at 26% — down a mere 1.5% since the 2019 state election. It's a different picture in the northeastern state of Mecklenburg-Western Pomerania, where the AfD has fallen to 15% in the polls — down from 20.8% in the 2016 state election there. In 2018 the AfD organized big anti-immigration protests in Saxony

The appetite for right-wing conservatism in the deep south of the east can possibly be traced back as far as 1815, says political scientist and the Göttingen Institute for democracy research Michael Lühmann.

"If you look at the borders of the Saxony (Kursachsen) in 1815, which was larger than today's Saxony, then that corresponds with the distribution of AfD strongholds in the past federal elections in Eastern Germany — that’s to say, parts of Saxony, a bit of Saxony-Anhalt, and a bit of Thuringia," he told DW.

Two centuries on, Lühmann suggests that what remains is a strong sense of Saxon identity. He sees a correlation: "There's a danger that a strong sense of identity can isolate a group, shut others out. And that seems to be the case in Saxony — the idea of 'Saxon exceptionalism' is prevalent."

Jump forward to the 1990 elections in former East Germany (GDR) — just six months before unification — electoral maps show that the right-wing conservative German Social Union (DSU) (the right-wing ally of the time to the CDU) won more than 15% of votes in the most southern parts of the GDR, compared to just 2% northeastern coastal regions.

Since reunification, three decades ago, Saxony is also the only eastern German state to have never seen a change in government: The conservative CDU has been in power throughout and its parliamentary party in Saxony is the most right-wing in any of the German state parliaments. 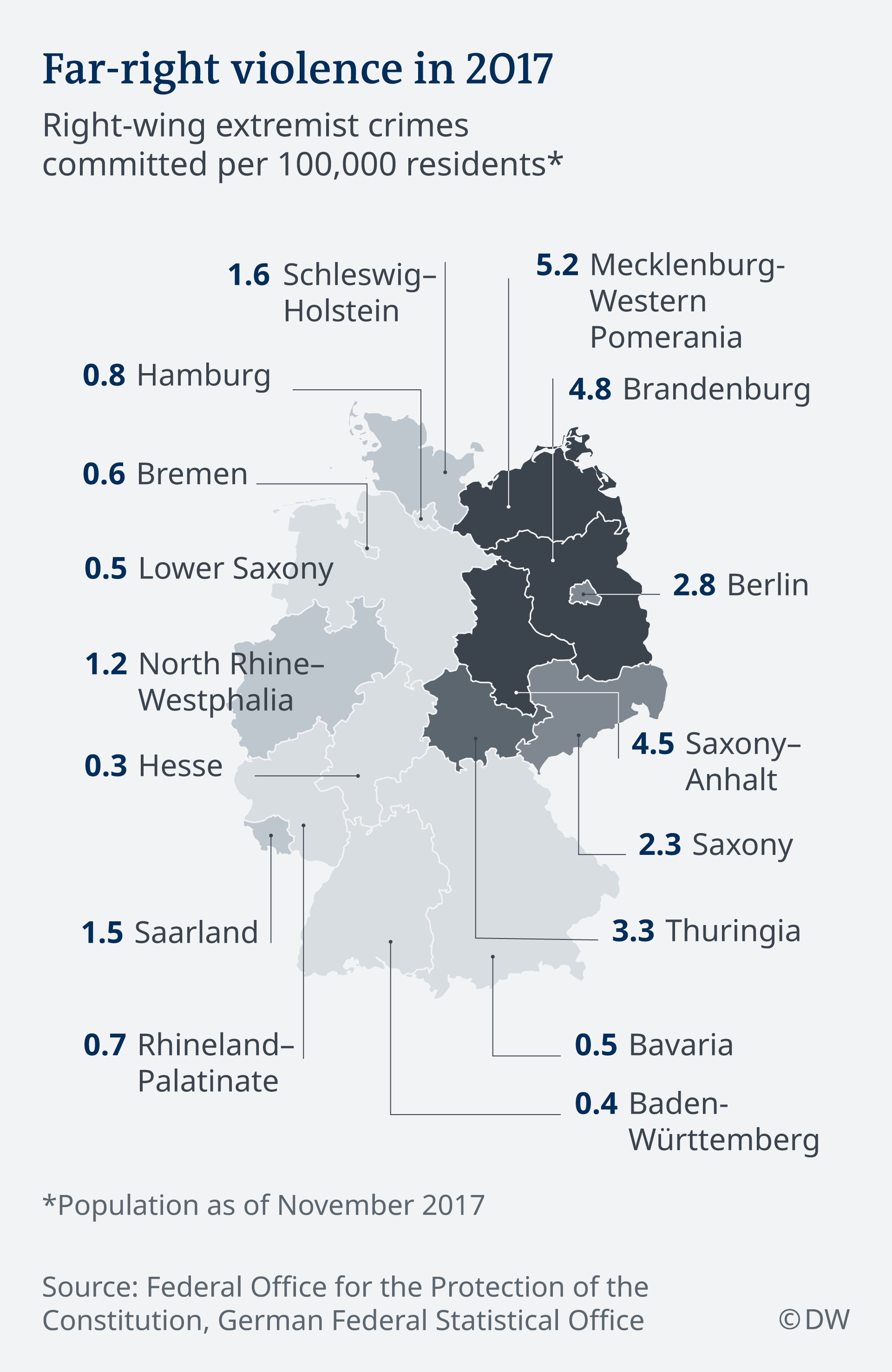 The eastern German regions have a record of right-wing violence

In the three decades since reunification, the CDU in Saxony has repeatedly come under fire for ignoring and belittling neo-Nazi and far-right extremist incidents. Former Saxony State Premier Stanislaw Tillich was seen to jump on the xenophobic bandwagon when he proclaimed in 2017: "The people want Germany to remain Germany," although only 5% of the state's population are not of German origin. His successor, Michael Kretschmer, then came out in support for Hungarian Prime Minister Viktor Orban's decision to erect a wire fence on that country's border.

Any slump in support for the AfD in Saxony, says political analyst Lühmann, is "likely to see the CDU in Saxony fishing for those voters on the fringes of the far-right."

Throughout their existence, the AfD party has thrived on key topics: In 2015, the far-right populists were brought back from near-extinction after adopting a staunchly anti-migrant stance in the face of the arrival of Syrian refugees. Attempts to capitalize on dissatisfaction with anti-coronavirus measures do not seem to have paid off.

Looking ahead to next year’s federal election, analysts suggest the AfD will need to find a new drum to bang.

The AfD has failed to come up with suggestions to fight the coronavirus pandemic. Instead, it has latched on to coronavirus-skeptic demonstrations — frequented, among others, by conspiracy theorists and known far-right extremists. But in Germany, like in other countries, strong leadership in times of the pandemic give a boost to ruling parties.

The AfD, meanwhile, has aligned itself with skeptics on the issue of climate change: They are seeking to protect Germany's auto industry and are campaigning against bans on diesel cars. Such rhetoric has resonated little to date since the topic of climate change has taken a back seat in times of coronavirus pandemic.

"If the other parties are clever in next year's election campaign, then they'll let the AfD cater to the extremist far-right," says Lühmann. "That will damage the AfD no end" — east, west, nationwide.