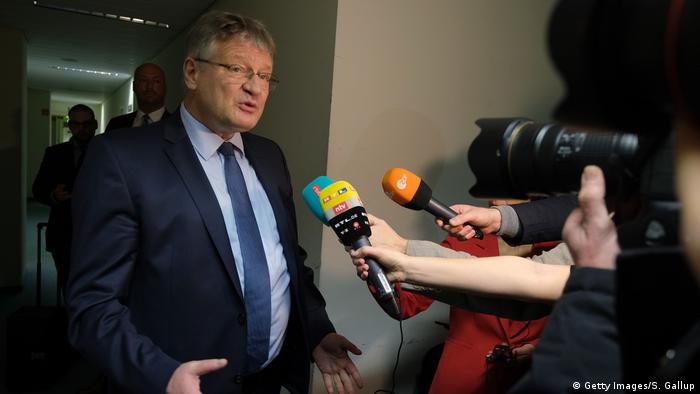 Infighting within the far-right Alternative for Germany (AfD) party intensified on Thursday after the party's co-leader called for a radical faction to be split off into its own party.

Co-leader Jörg Meuthen (pictured above) said the AfD and its strongly nationalist "Wing" (Flügel) faction could reach more voters if they were two separate parties.

"Everyone knows that the Wing and its key exponents are costing us a massive amount of votes in the conservative camp," he told the Tichys Einblick news magazine on Wednesday.

Expanding on his remarks, Meuthen told the German dpa news agency on Thursday that a decision could be made by the end of 2020.

"We should discuss this in an atmosphere of calm, but then come to a decision by the end of the year," Meuthen said.

Germany's domestic intelligence agency, the BfV, launched an investigation into the "Wing"in March and put the group under surveillance. In the decision at the time, the BfV said the AfD faction has a "right-wing extremist tendency" that opposes free democratic order.

Following the decision, the AfD announced it was planning on dissolving the faction, which has around 7,000 members.

Meuthen's remarks sparked a fierce debate within the party, with several prominent members outright dismissing the notion of splitting the AfD.

Alexander Gauland, who heads the AfD in the Bundestag, said splitting the AfD into two "free-conservative" and "social-patriotic" factions would end up weakening both.

"Jörg Meuthen's thoughts are not very constructive and highly apolitical," dpa quoted his as saying.

The leader of the "Wing" and the head of the AfD in the state of Thuringia, Björn Höcke, called the suggestion "misguided and irresponsible."

"The discussion about the division of our party into a western and an eastern AfD, into a Wing and a non-Wing AfD is superfluous," Höcke wrote in a Facebook post, adding that such a decision would be a failure of the party's attempts to "unite" Germany.

Höcke has regularly sparked outrage by calling for an end to Germany's culture of remembrance concerning the Holocaust and Nazi crimes.

Founded in 2013 as a primarily euroskeptic party, the AfD has since moved further to the right — gaining popularity with a fiercely anti-immigration stance. The AfD is currently the largest opposition party in German parliament, gaining 12.6% in the 2017 federal election.