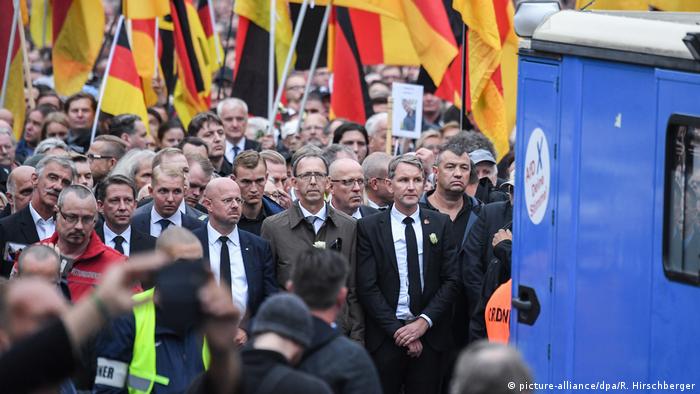 Albrecht Andreas Harlass loves German traditions. He loves his German shepherd dog, Bruno, or the changing seasons and their special characteristics, for example, the serene atmosphere at Christmas. That's when Harlass sets up the Yule Candlestick, modeled on pagan Germanic rituals. 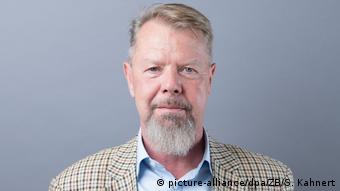 Harlass dreams of the AfD 'seizing power' in Germany

And he likes to quote archaic table prayers: "Let us give thanks for clouds and wind, for bread and fruit, for forebears and progeny." Harlass shares all this with his friends on social media. He is spokesman for the far-right Alternative for Germany (AfD) parliamentary party in the state parliament of Saxony.

But Harlass doesn't stop at being traditional. According to a court verdict, it's permissible to refer to him as a "neo-Nazi through-and-through." His Yule Candlestick also belonged to the customs of the murderous SS under the Nazi regime, and the table prayer was penned by an Nazi ideologue and anti-Semitic writer. Harlass wears clothes ordered from a neo-Nazi internet retailer. And in his speeches, he talks of his party "seizing power" in Germany — a term generally associated with the beginning of Hitler's rule.

Harlass fantasizes about another Germany. A Germany that has put an end to the hated policies of the established parties. A Germany that "cleans up its house" and finally sends disagreeable journalists to the "job center." All the while, he maneuvers between ultra-right-wing slogans and bourgeois down-to-earthness.

Harlass is no fringe figure in the AfD. He is a prominent functionary at the heart of the party, and his is not an isolated case. The self-declared Alternative for Germany is full of demagogues ranging from the radical to the revolutionary. There are the stars of the show with their links to anti-constitutional organizations or neo-Nazi rallies. There are Bundestag Members, who have gone on shooting practice with racist groups in South Africa or invite neo-Nazis to give speeches.

And there are the numerous active and former employees of the AfD in the parliaments, who have links to extreme-right fraternities or anti-constitutional activists such as the Identitarian movement. One is even suspected of financing terrorism. Another had close ties to a suspected right-wing terrorist. Research carried out by the left-leaning daily tageszeitung found that 23 delegates in the Bundestag alone employed people meeting those criteria. Add to that the considerably more numerous members of the regional chapters of the AfD who have extreme right-wing connections.

Even the self-declared "moderate" functionaries don't seem all that moderate at closer inspection. Take, for example, the parliamentary leader in the state parliament of Hamburg, Alexander Wolf. He is a member of the extreme-right fraternity Danubia München, which also invites Holocaust deniers to give lectures. This radicalism has won the AfD numerous successes in Germany. The most radical state chapters have been the most successful in elections; in some regions of eastern Germany, they are poised to become the strongest political force.

Could radicalism scare off voters?

That higher profile also means the links to the far right are becoming more and more obvious, and more alarming for the domestic intelligence agency (BfV). It now officially categorizes a section of the party as anti-constitutional and extremely right wing. This could have serious repercussions for the party later on. Belonging to an anti-constitutional organization can cost you your job in Germany, if you are a teacher, police officer or any other kind of public employee. And in the end, it could scare off AfD voters and hamper its ascent.

This is why the federal executive of the party has called for the dissolution of the grouping known as Der Flügel (The Wing), the extremist grouping around the rising star of the party, Björn Höcke. According to the AfD itself, he represents about 20% of all members. Höcke and the second strongman in the Flügel leadership, Andreas Kalbitz, have officially declared the group dissolved via Facebook.

Does this mean the AfD will become less radical? There is nothing to indicate that it will. The close-knit network of right-wing groups and connections is too tightly woven into the fabric of the party. And until now, the party leadership has either supported radical protagonists or hesitated to do anything drastic about them. According to the domestic intelligence agency, Kalbitz was a member of the racially oriented and anti-constitutional Heimattreue Deutsche Jugend (Patriotic German Youth), which observed the traditions of the Hitlerjugend until it was disbanded. He has yet to suffer any negative consequences.

The radical forces in the party can put their success down to discipline. They occasionally make aggressive sorties, but they always seem to know when to appear down-to-earth and pleasantly bourgeois. This is in accordance with rules stipulated by their intellectual role models, such as publisher , who wields a lot of influence within the party. He is invited to important meetings to share his views.

At one such meeting in July 2017, he delivered a keynote urging AfD parliamentarians to "speak two languages: one to the inside, one to the outside." He said the goal was to tactically shift the "corridor of opinion" to the right. "Terms that are unthinkable or radical — from the point of view of the ordinary citizen — are terms that you as a party should avoid at all costs," he counseled. Actual demands for a system change and an authoritarian state were to be thus veiled. Gradually, the "movement" had to conquer "speech zones" in which "what appears radical now subsequently seems less unacceptable."

Politicians like Albrecht Andreas Harlass have made great strides within the party by following this tactic, and they are flexing their financial muscles. The German daily Rheinische Post calculates that the AfD will have received some €400 million ($440 million) from the state party financing system between 2017 and 2021 alone, to support their parliamentary work — from municipal to federal level. The radical forces, too, have realized that money talks.