Activists in Germany demand legalization of abortion | Germany | News and in-depth reporting from Berlin and beyond | DW | 27.09.2019

Abortion in Germany, while practically possible for most women, technically remains a criminal offense in all cases. Opponents of the laws want a full legalization but that alone won't improve access, some activists say. 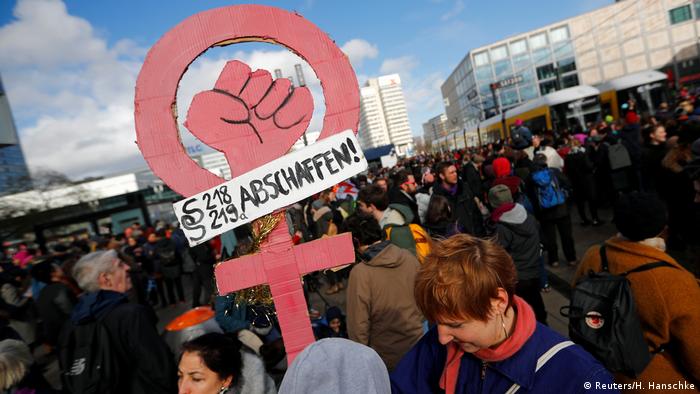 There, in the German Criminal Code, between the laws on murder and abandonment, sit paragraphs 218 and 219. They pertain to — and criminalize — abortion in Germany. On Saturday, activists will be taking to the streets to demand the paragraphs' removal as part of a global abortion rights demonstration.

Sarah Thibol, activist with the feminist organization Frauen*Kollektiv in Cologne, is one of many planning to protest. Her personal goal is "that women realize abortions are not legal in German. So many people are surprised the first time they hear that."

According to German law laid out in paragraph 218, anyone who terminates a pregnancy can be fined or imprisoned for up to three years. There is no criminal liability if the abortion is necessary in order to protect the health of the woman, if rape led to the pregnancy, or is the woman takes part in consultation and has the abortion before the 12th week of pregnancy. However, these exceptions do not make abortion legal; rather, the process is merely possible without punishment.

Germany's Federal Statistics Office reported just over 100,000 abortions in 2018. Around 96% of the procedures took place after a consultation and before the 12th week of pregnancy. Just under 4% were carried out due to medical complications during the pregnancy, and only 20 pregnancies were aborted due to conception by rape.

Although almost all women in Germany have access to abortions thanks to these loopholes, activists like Thibol are demanding a complete decriminalization. "Someone else has control. We simply don't have the right," she says. "We're only allowed if someone says, 'It's ok if you do it now.' But actually it's not permitted." 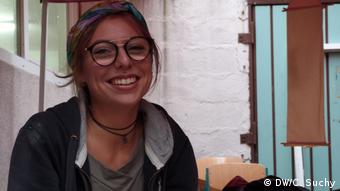 Kate Cahoon, activist with the German group Alliance for Sexual Self-Determination, sees another problem. She says the placement of the two paragraphs on abortion in the Criminal Code makes the topic taboo. "It's so morally charged, and it makes women who get pregnant unintentionally and have an abortion face additional stigma."

Germany's political parties are split over possible decriminalization. Angela Merkel's conservative Christian Democrats and their Bavarian sister party, the CSU, as well as the far-right Alternative for Germany, largely oppose any changes. The Social Democrats, who currently co-govern with Merkel's conservatives, and the other non-governing parties support legalization.

The heated discussion around abortion draws both supporters and opponents to the streets of Germany. Most recently, on September 21, the demonstration "March for Life" against abortions made its way through Berlin. The organizers from the Federation for the Right to Life said more than 8,000 people took part.

Around 5,000 counterprotesters also turned out, heckling the march and setting up temporary roadblocks. 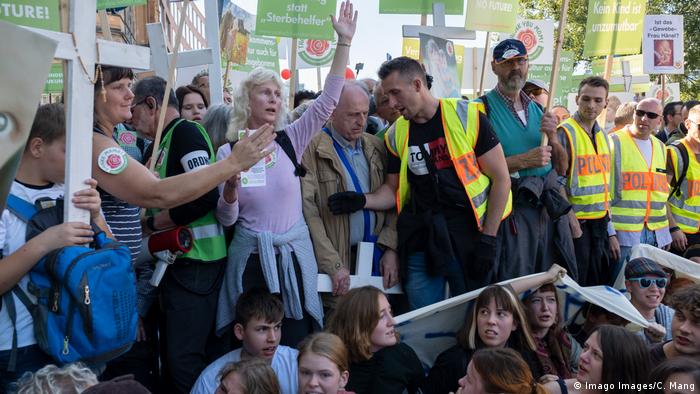 Abortion is a hot topic in Germany, and its opponents also take to the streets, such as these in Berlin in September

Demonstrations have been ongoing for decades, with the "My Belly Belongs to Me" movement protesting the abortion-related articles of the Criminal Code back in the 70s.

Public discussion flared up in recent years after gynecologist Kristina Hänel was sentenced in late 2017 for violating paragraph 219a of the Criminal Code. This paragraph regulates how doctors are allowed to advertise abortions. Hänel was fined €6,000 for listing abortions under the provided services on her website. 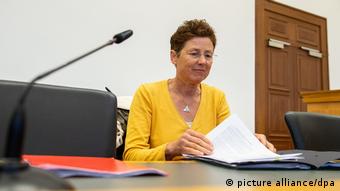 Hänel was convicted in 2017 of illegally advertising abortions

Following protests, the German Parliament voted to reform paragraph 219a. Previously, this law had forbidden doctors from stating that they offered abortions. Now doctors can say that they offer them, but they cannot provide any further information about the medical methods. This information is to be provided by the German Medical Association in a list available online.

Cahoon is not satisfied with the outcome of the reform. "It was a lazy compromise," she says. "It didn't lead to any real change. The list is almost completely empty. It's really a pathetic list. We've heard from medical professionals that they're unwilling to be included on that list as long as the legislation remains unclear."

Cahoon says that many doctors don't dare offer abortions because the law is still unclear. On top of that, many doctors in Germany do not even have the necessary training. German medical schools often do not teach abortions. One of the biggest medical universities in Germany, the Charite in Berlin, only began offering courses on the topic last year.

Students often have to find other ways to inform themselves about abortion procedures. "If we're not trained to be able to do [abortions], it takes a lot of initiative to learn it. There will be no doctors left who can do the procedure," says Caroline Gabrysch, activist with Medical Students for Choice, a student initiative at Charite. 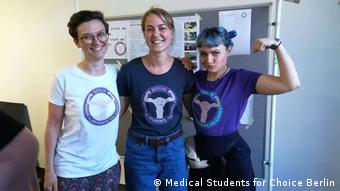 Women have reported having to drive a few hundred kilometers to find a doctor who is willing or able to offer an abortion. The Federal Statistics Office reported a total of 1,150 facilities offering abortions in early 2019. In 2003 that number was around 2,050, nearly twice as high.

"In big cities like Berlin or Hamburg, it's not such a big problem. But if the only person I can talk to somewhere in the countryside is a doctor who doesn't know anything, or hasn't taken the time to inform themselves, then I'm left there as a woman standing alone. I have to search the internet or go a long way to find the information I need," says Gabrysch. 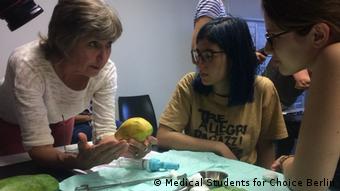 Organizations like Medical Students for Choice are trying to compensate for the lack of abortion education opportunities by offering external seminars. One of these seminars is the so-called Papaya Workshop, which uses the tropical fruit to show how an abortion can be carried out.

While scratching paragraphs 218 and 219 from the Criminal Code is activists' main goal on Saturday, Thibol says this is only the first step. "The removal is the minimum that needs to happen," she says. "After that we need to keep fighting for women to have the right to be able to have an abortion without losing their jobs, or being shut out of their communities."

Two gynecologists in Germany could face jail time for listing abortion as one of the medical services offered at their practice. People outside the court argued that providing information to women shouldn't be a crime. (29.08.2018)