Across time and space: A very European love story | Europe | News and current affairs from around the continent | DW | 17.06.2013

Across time and space: A very European love story

A bronze statue has been unveiled in Kyiv celebrating a very European love story which has spanned more than half a century, crossed borders, and transcended politics. But will the protagonists meet again? 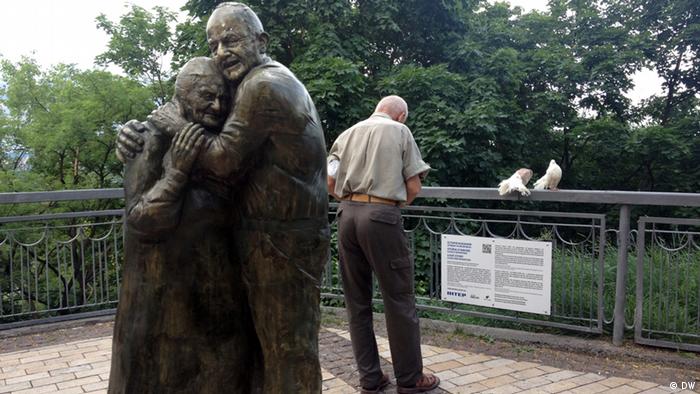 It was a moment of high emotions, tears, smiles and hugs; the moment, in 2004, when Luigi Peduto from Italy and Mokryna Yurzuk from Ukraine were reunited on Russian television. It was more than half a century after they first met in Austria in the Sankt Pölen forced labor camp in 1943.

Luigi, the more emotional of the two, hugs Mokryna, or Maria as he calls her, to his breast, crying and spluttering words of endearment and repeating over and over again to her that he is "her Luigi." She remains quiet and appears to submit to his embrace, but doesn't seem quite as moved.

That moment they reunited has now been immortalized in bronze in Kyiv, and has become a bit of a tourist attraction. Lovers and visitors are reportedly touching the statue in the hope that some of the couple's enduring magic will rub off on them.

The story which, since 2004, has been picked up by both Russian and Ukrainian TV and half the world's media, has seen the two protagonists visit each other in their home towns. The experience was strange, and very emotional for both of them. Mokryna, recalled on TV that when she visited Italy, everything was small - the trees, the food, the people and the cars. She noted that Luigi can't live without parmesan, and after trying a bit of her Ukrainian food, he quickly took over the cooking, rustling up a meal of pasta and wine for her. His inability to drink vodka, though, did not meet with much approval from her, and nor did his attempts to help her in her garden, where he nearly killed off her beloved raspberry bushes, resulting in her squeaking incredulously, "are you stupid?" Luigi replies with a hug, and the two seem to calm down. 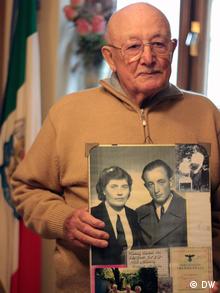 Asked to turn back the years and describe how their love affair started, Mokryna gets slightly more sentimental.

"I was asked to help a tall good looking Italian mix cement for a new barracks we were working on." She reportedly told the Ukrainian newspaper, Fakty and Commentarii. "I couldn't speak Italian, so we could only smile at each other, laugh and flirt, but we soon established a rapport and made sure we could be together whenever it was possible."

That was in the Sankt Pölen camp, where the two had ended up by very different routes; Mokryna as a forced laborer, and Luigi as a prisoner of war. He had been holding the line in Split, Croatia with a regiment of the Guardia di Finanza (the militarized tax police), when Italy, in September 1943, already being invaded by allied armies through Sicily, requested an armistice. Having surrendered their weapons, Luigi's regiment was rounded up by the Germans, and frog marched by foot to Budapest in Hungary. From there they were loaded onto trains to a first camp where anyone who had any skills useful for the war effort were sent to work in German and Austrian industry. Luigi, a tailor by trade, was taken to the prisoner of war camp in Austria and put to work there.

"There were three Ukrainian women, as well as us Italians. They were charged with straightening nails they used to use a piece of iron, and a hammer, and just bang these nails straight all day long," Luigi told DW. "In the morning they'd stop work for about 15 minutes so we could have some breakfast, and they'd bring a big cauldron, with a kind of soup and a bit of bread, and we would dip in."

Then one day, during this break, he noticed a young woman, "she was young, just 23 or 24 years old. I'd been in Croatia two years, and so I'd picked up some of the language there, and it's not too dissimilar from Russian, so I could say a few words."

On hearing that Mokryna had a child, Luigi tried to help her, bringing extra food that he was given in return for sewing things for fellow prisoners.

"It wasn't love at first sight," he recalls, "because she was very cool and didn't open up very quickly. But what made me fall in love with her was when she said that she had a little girl; because that really tugged at my heartstrings. You know I'd suffered a lot in life - my mum died when I was little and I had to look after my younger brothers and sisters, so I felt for Maria and her child."

The couple only learnt a few words of each other's language, but their bond seemed strong and they didn't forget each other, even though they were separated, sent home to their respective countries, and Mokryna remained unreachable behind the iron curtain.

They both married, had children and grandchildren, but Luigi insists that he kept Maria's photo with him the whole time. "I didn't forget her. Here it is. It's always with me, I also have a lock of her hair, here; you can see it."

In 2004, fate intervened, in the shape of a Russian TV show. Luigi, by now widowed, asked a Ukrainian woman in his town near Naples to help him write a letter to the show, which helps reunite lost loves, in the hope that with the photos and other clues he had kept, they could help him find his Maria.

"We wrote the letter in June" he remembers, then "we waited, and we waited and we waited. Months went past, June, July, August, September, then on October 11, which happens to be my birthday, I was at home alone. And then there was a telephone call. They asked if I was Luigi Peduto, and I said, yes, that's me."

To Russia with love

The producers of the show told him that they wanted to fly Luigi to Moscow to reunite him with Mokryna.

"So I went immediately to Salerno," Luigi recounts, picking up the tale "and got my passport sorted out. I was just so moved, I couldn't contain myself: I went to Moscow and on the second evening, I went on TV and Maria came out. Everyone was clapping and I was so happy, and Maria was there before me. I was totally moved to tears."

Maria didn't seem quite so moved. A hard life on a collective farm meant that she appeared much older than Luigi who is still a twinkly eyed old man, happily recalling the glory days of his past.

Mokryna told the Ukrainian newspaper, Fakty and Commentarii, "When I saw Luigi, I just couldn't believe my eyes, he looked so different. Back then, he was tall and thin, now he was well built. But I could still see he was nice, and there, underneath were those same blue eyes. He screamed out, 'Maria', and hugged me and kissed me: He kept calling me 'my little dumpling' over and over again. And then he pulled out the lock of my hair that he'd kept from when we'd parted."

During his interview, and the TV shows, Luigi cries frequently. He bemoans the fact, but seems strangely impressed, that Mokryna herself never breaks down. "I have never seen her cry, NEVER. I was just a mess, crying all over the place, repeating over and over again, I'm Luigi, I'm Luigi."

Brought together in TV heaven, the journalists hoped that the couple might get married, but Luigi remembers Maria's reaction when they asked her about a possible proposal. "She came out of her house, and laughed, she just wouldn't respond. Ha ha ha, that was absurd, how should she have responded, how could she accept a proposal?"

Nevertheless, Luigi kept in touch, sending packets of parmesan cheese and other things he thought might help Mokryna in her remote village. News spread of his continuing devotion to her, so much so that the city of Kyiv took the unusual step of erecting a statue of the couple to commemorate their love story. The town's chief architect, Sergei Tselovalnik, explained that he hoped their example would inspire others to create enduring relationships. The statue, he told DW, was part of the city's drive to move away from its communist past, where only generals and leading lights of the society were honoured and to tell the story of ordinary people too. He added that the Ukranian TV company paid for the statue, but that it has already become popular. 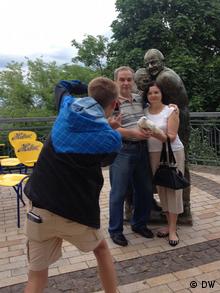 The statue is right next to what is known as the lovers' bridge, and it attracts foreign and Ukrainian tourists alike, who all seem taken by the story. Inna Klemniuk, a 30-year-old housewife loved the story, she told DW. "This statue recognizes ordinary people, and that's nice. Even after so much time, they never forgot each other, and they still searched each other out. This is all about the meaning of life, which is love, at least for me." Tatiana, a 58-year-old pensioner, agrees "When I heard this story, I had tears in my eyes, it is just so wonderful, and it was funny watching them get together in the Ukrainian village too, I laughed a lot at that."

Back at his home near Naples, Luigi is planning a trip to Ukraine this August, to see the statue and Mokryna, if his, and her health permit. He seems to really enjoy the fame his love story has brought him.

"When they know that Luigi and Maria are going there, the whole world will mobilize, the cameras and everything, all the emotions, oh, I just feel overwhelmed already. The statue of me and her, the whole world knows about it. It was just so wonderful to have our story recognized. I just don't know how to express myself, but it's just beautiful, even words can't describe that, you just have to imagine it. I feel overwhelmed already." 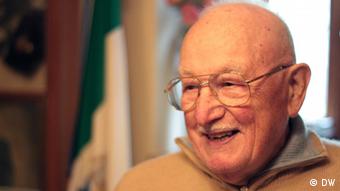 After 20 years of Bundeswehr missions abroad, Germany has a new generation of young army veterans. Now they're fighting for more rights and facing the difficult relationship with the word "veteran" itself. (20.05.2013)

Digging up the past in Halbe

In the forests around Berlin lie perhaps tens of thousands of bodies, victims of the fierce battles of WWII and the vagaries of history. One man is digging up this past, determined to give the dead a proper burial. (24.04.2013)

Ten years after the "Orange Revolution" Ukraine appears to be leaving that path to democracy and returning to its Soviet past. Can its course be changed? (08.05.2013)

Listen to Inside Europe's Radio report, by DW's Emma Wallis