Digging up the past in Halbe

In the forests around Berlin lie perhaps tens of thousands of bodies, victims of the fierce battles of WWII and the vagaries of history. One man is digging up this past, determined to give the dead a proper burial. 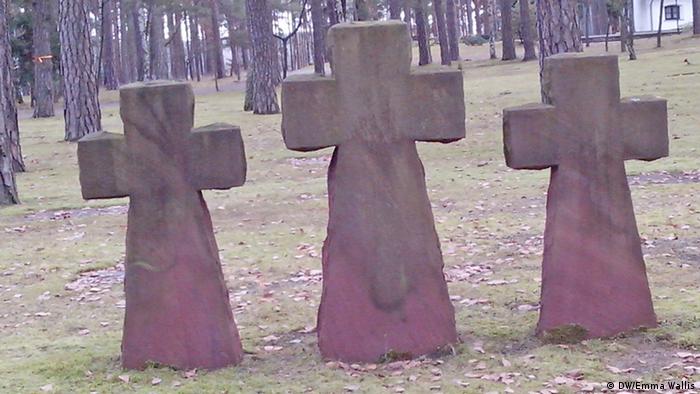 The Battle of Halbe in Brandenburg, eastern Germany, and many other similar battles during the Red Army’s gradual march towards Berlin, raged in the last days of World War Two, in April and May 1945. Estimates vary as to how many soldiers and civilians died, with the Russians claiming to have killed about 60,000 Germans in Halbe alone, and similarly high losses exacted on the Red Army. It is estimated that more than 100,000 civilians got caught up in the battles too as they attempted to flee westwards ahead of the advancing armies. Hundreds of thousands more were involved in other battles as the Eastern front moved inexorably west. 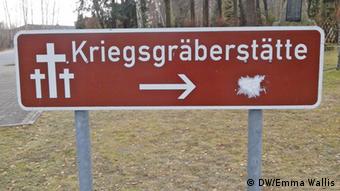 Today in the cemetery in Halbe, about 29,000 people, so far, have been buried, many in unmarked graves, but tens of thousands more still lie in the Brandenburg pine forests where they fell. The Volksbund's "Waldfriedhof," or forest cemetery in Halbe, (maintained by the German war graves' commission) is heavy with history. Tall pine trees stand silently above row upon row of graves, some bearing names and some just listing a number of soldiers and civilians whose remains have been interred beneath the simple plaques. 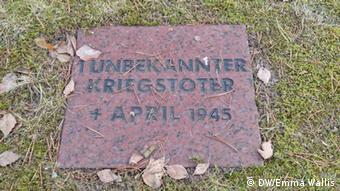 Grave for an unknown soldier in Halbe's cemetery

Joachim Kozlowski is the man in charge of finding these soldiers in the forests and burying them in cemeteries like Halbe, which is one of the biggest war cemeteries in Germany. He has a personal reason for trying to identify fallen soldiers too.

"My family history is such that my great grandparents were born in Kiel and died there," he tells DW. "But by the time of the Second World War my grandparents had resettled in East Prussia. They had five children: my mother, two sisters and two brothers, Kurt and Max, and the two brothers have been missing ever since the war. One definitely died somewhere in East Prussia, and we have information that the other one was sent to the elite SA unit, the 'Feldherrnhalle' in Berlin in 1944, but then we lost any trace of him."

Kozlowski works mostly on his own on a daily basis, but he's part of a much wider team from the German war graves commission (the Volksbund Deutsche Kriegsgräberfürsorge) and sometimes he calls in teams of diggers, or bomb disposal experts when he uncovers a big grave. He is not allowed to dig without having the bomb disposal teams on standby; because as well as human remains these forests still sometimes turn up unexploded ordnance too.

'The dead have the right to rest in peace'

Stomping through the forest in his warm winter boots, Kozlowski is practical and determined. "We find the dead in all sorts of places and we bring them to the graveyard. The dead have a right to rest in peace. A dignified burial can only really be in a proper graveyard. It’s not just a case of me finding a mass grave of 500-600 bodies, sticking a cross on top and saying, that’s me done." He explains that once he has found bodies, a process of meticulous identification starts where he uses photos and written records to catalogue everything he finds. Then he has to try and cross match it with war records of the period and lists of the still missing. 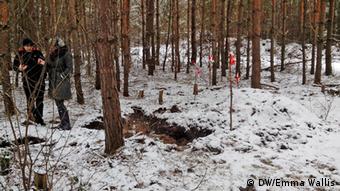 How many more thousands of secrets do the forests have to give up?

Sometimes he also digs up the unmarked graves within the cemetery to further identify who might lie beneath the crosses.

"When I find dog tags or other bits of information that might identify the soldiers, that can really help. I send it all to the Wehrmacht's information center. There they have information on millions of soldiers. So it's easier for them to match up information I've found with potential people and then see if there is up to date contact information for that person's relatives so they can be told we've found their missing soldier."

Kozlowski is a former soldier and paramedic himself, and his job today is like a kind of historical CSI (Crime Scene Investigator), forensically piecing together history from the tiny fragments of a person's life that he finds.

"When I find soldiers in the hills or mountains they often have with them other means of identification. This might be a wedding ring, or a lucky charm, or something that their children or their family gave them to carry, with initials or a name on it. Perhaps an ink pen with initials, or glasses, anything personal."

Identifying as many people as possible is important for Kozlowski, not just for the dead, but the living too. He thinks that grief should be focused on a place and that families need to know, wherever possible, what happened to their loved ones. 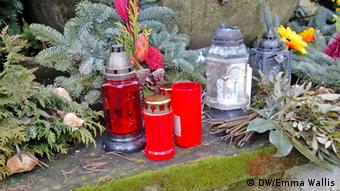 The German War Graves Commission, charity donations and the "Bundeswehr", the German army, support and pay for his work. Amazingly, even almost 70 years after the war's end, he is still finding unburied bodies in these forests. 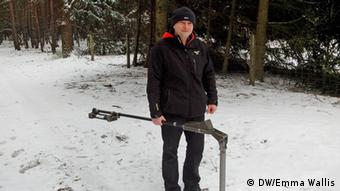 The equipment Kozlowski uses is relatively simple. He has a series of metal detectors, a spade and a shovel. Although for big areas of forest, he will use earth excavators before finishing the job by hand. Bodies lie at all different depths in the forest, depending on whether they were killed by a bomb and lie in the crater or shot dead or mown down by tanks. Some bodies lie just 50 centimeters below the surface, he says. Others can be one, two or three meters down.

"When big bombs go off, the bodies can lie as deep as 15 meters. The earth's structure is completely changed when a bomb has exploded, so you can tell what happened here. This here is where I found the last two bodies. In this area, I found loads and loads of bomb shards that had just been blown all over the place. Sometimes the bodies are completely blown away, or scattered, but if I've found two bodies here, you can be sure I will find lots more."

Sometimes Kozlowski's work can be complicated by bounty hunters, looking for memorabilia and ordnance from the war. But he quickly sections off the forest when he finds something and starts sifting and digging through the earth so he can maximize his chances of identification.

A boot, relic from the Second World War

We walk towards a spot he's been working on this week. The bones have already been carefully packaged in small purpose built coffin shaped boxes, but one soldier's boot is still in the grave and intact, although rotting. 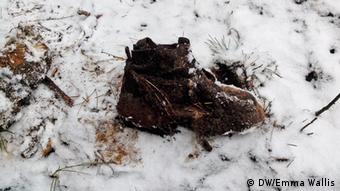 A soldier's boot from the Second World War, found in one of the spots where Kozlowski was digging

"One of the soldiers I found here was about 20 years old, and the other one was between 25 and 30. I have to wait for the bones to dry more, and then I can find out a bit more." 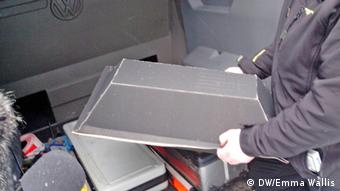 The coffin shaped boxes for the bones Kozlowski finds

Looking all around at the seemingly unending forest, you realize just how vast Kozlowski's task is, but he seems undaunted.

"You know it is a great feeling, when you can find out enough from the bodies and the bits around them to identify someone totally. On those days, I feel super. I go and sit in my car, and just listen to some nice old music; it is just such a fantastic moment for me. Of course, other days, I just can't establish anything, even when I try and try and search and search, and those days are very frustrating."

He tells of how some families will phone him up to thank him personally if he uncovered their relatives. Others send money via the Volksbund organization so that he can place flowers on the graves, something he says he is very happy to do as he lives near many of the graveyards.

Kozlowski's work is not just confined to Germany. He has been all over the former battlefields of the East, in Latvia, Lithuania, Estonia, Poland and Russia. In the past things could get complicated with foreign authorities and history still looms large. The wounds of the Second World War are still not healed. This was also true in Germany, until the fall of the Berlin Wall and the collapse of the East German communist regime. Prior to that, no one in the former GDR wanted to waste time or money digging up the inconvenient truth that Germany was once at war with Russia and therefore communism.

"It just wasn't a theme that was talked about during the GDR. No one bothered to look for German soldiers then. There were lots of monuments put up to Soviet soldiers, of course."

Even today, the taint of the Nazi past can make some Germans unwilling to confront what went on here. However for relatives of the dead soldiers, finally knowing what happened to their fathers, brothers, uncles and grandfathers allows them to close a bitter period of history.

'Who is happy when they find a dead body? I am'

"I’m happy when I manage to find and identify a body. That might sound macabre," he smiles. "I mean, who is happy when they find a dead body?" he questions, and then explains: "I am, then I can give that person back to their relatives and they can visit a spot where their loved one is buried."

But the saddest thing about his job, he thinks is finding children and civilians who were caught up in these battles. "I think: what did they have to do with all this horror? So many children paid for this war with their lives, really tiny ones, new born, or two or three years old. And then I think, I want a new job."

Standing in the latest shallow grave, an eerie sadness fills the air, you start to feel like you are walking on the dead wherever you tread. Joachim Kozlowski, though, remains practical and pragmatic in the face of the enormity of his task. He says the numbers of dead and missing are impossible to quantify, as estimates vary wildly as to how many people fell victim here. But the forests around Halbe and Berlin have potentially hundreds of thousands more bodies lying just a meter or two under the sandy soil beneath his feet just waiting to be found. 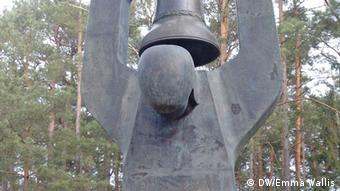 Memorial for the fallen in Halbe

Kozlowski, knows that dying is the business of war. But even someone who acknowledges he's seen pretty much everything you can see, can find it hard. But it's almost as if he has got no choice.

"This is a mission, a calling," he confides. "It's not just a normal job. The work gets into your heart, it really does." Deep down, the born optimist is still hoping to find his uncles buried in the sandy soil somewhere during one of his excavations.

Joachim Kozlowski works for the Volksbund Deutsche Kriegsgräberfürsorge, the German War Graves Commission. You can find out more about their work at www.volksbund.de