A Smooth Ride With Solar Energy

One of the nicest ways to see Germany’s capital is by boat. For fans of environmental technology, there’s an alternative to the fuel-powered ships that cruise the city’s waterways: Berlin’s only solar-powered boat. 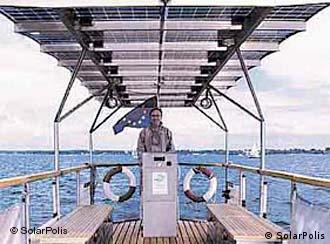 The Gaienhofen is transforming the way visitors experience Berlin.

It’s not hard to spot the Gaienhofen at Berlin’s City Harbor. You’d expect a solar boat to look a little different, and this vessel is no disappointment.

She looks like a cross between a catamaran and a floating barge. The sides are open, with just a steel railing. Her most notable feature, though, is a roof that is actually a series of solar panels.

"This boat has a 1,750 watt solar generator on the roof, so on a clear day, we make enough energy for a whole tour on the Landwehrkanal Channel and Spree River," the boat’s operator Arno Paulus explains.

The Gaienhofen has been operating for over three years now. But Paulus admits that he still caters mainly to a niche clientele. "We have guests who have an interest in environmental issues," he says. "They like a boat without noise and where there are no emissions."

The bicycle of the waterways

The boat can take groups of up to 10 people and at a cost of about 16 euro ($20) per person, it’s only marginally more expensive than a tour of the same length on a standard, fuel-powered boat.

The Gaienhofen is not exactly competition for the mainstream Berlin river cruisers, though. They take up to 300 passengers and dwarf their small solar sister. But they also make a lot more noise and churn out smelly black fumes.

Paulus says the relationship he has with the skippers of the large ships is like the Mercedes versus the bicycle driver. "They have much more power than we have, and we are very slow and quiet."

A solar look at Berlin

Customers can charter the Gaienhofen, named after the first German town to use a solar ferry to cross Lake Constance into Switzerland. But operator Paulus also offers a four-hour "solar tour" of Berlin, during which he points out locations where solar technology is used.

Paulus shows his guests buildings that are either part of Germany’s solar industry, or that make use of solar energy. 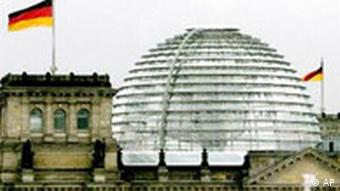 The Reichstag dome has become a landmark of the new Berlin.

One famous example is the seat of the German government, the Reichstag (photo). British architect Norman Foster incorporated energy-efficient features to cut carbon dioxide emissions and channel daylight into the interior through the building’s now landmark mirrored and glass dome.

Paulus says politicians in Berlin talked up renewable energies during the 1990s, when the city was being prepped to become the capital of reunified Germany. But he says big changes are needed if Berlin truly wants to lead the way in renewable energies.

He says energy policies have changed somewhat under the Social Democrat/Green coalition government. "But it’s not enough to save the climate in the future," Paulus adds. "We need new structures in our solar power industry." He says the dependency on nuclear power and fossil fuels must stop. "This is a big chance for the economy to leave the money here in the country that we now spend on oil."

The energy of the sun

And the Gaienhofen is certainly not dependent on oil. Paulus explains that the boat is powered by engine capacity totaling nine kilowatts, plus a battery store. "We only need electrical energy from the sun to drive the two electric engines in the catamaran," he says. The energy is stored there and this enables the vessel to travel about 55 miles per day. 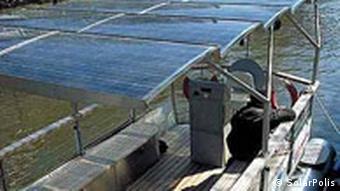 These solar panels power the tour.

The open design, however, has its downside. In the winter months, it’s just too chilly to take people out.

The solar boat isn’t turning a profit yet for Paulus. It’s still more about image and awareness. "The feedback is great," he says. "After the tour, nobody can tell them that solar power doesn’t work."

His goal is to add a second solar boat to the operation this summer, slowly but surely transforming the way visitors experience the waterways of Berlin.

EPIA is the world’s largest industry association devoted to the solar electricity market. It aims to promote photovoltaics at the national, European and worldwide levels.