Nothing could be cozier than snuggling up with a book on a rainy day, right? But more than 12% of adults in Germany can't enjoy that luxury. Many also struggle with writing a postcard or text message. 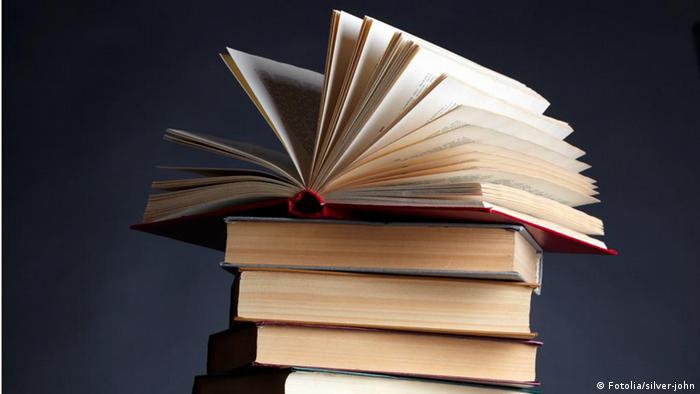 Imagine a life without reading or writing. Envision not reading your children a bedtime story, writing a Mother's Day card, or being able to decipher the medicine instructions for a sick loved one. Or being able to read the newspaper or delve into an exciting novel. For most of us, the world would shrink profoundly without the ability to read or write proficiently.

But for just over 12% of the working population in Germany between the ages of 18 and 64, marginal literacy is an everyday impediment. Those are the results assessed in a study by the University of Hamburg that was presented in Berlin last May.

In the "LEO" (Living with Marginal Literacy Skills) study, researchers said that the 6.2 million so-called marginally literate people is a number including those who can read individual letters, words or single sentences, but who have difficulty bridging together sentences, gleaning the essence of a longer text, or writing fluently. 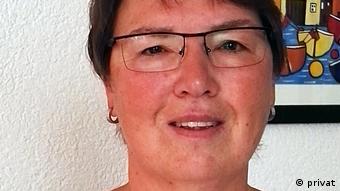 Kerstin Goldenstein is an eloquent 60-year-old based in Trier, who has honed strategies for tackling daily writing challenges.

"When I want to write a birthday card to someone, I write on little inserts that I can place into a card. If I make a mistake, then I just throw them away and start over," she explained to DW.

"I wouldn't have been able to talk with you about this two or three years ago," she said. "Opening myself up about the matter has been a long journey, just like learning to write properly has."

"The shame is tremendous among people who have problems with reading and writing," she confided.

Despite her writing issues, she still considers herself fortunate because she can enjoy reading a good book, if slowly. Also, some publishers specialize in releasing simplified versions of world literature or bestsellers, like German author Wolfgang Herrndorf's Tschick. Translated into English as Why We Took the Car, as well as into other languages, it's a youth novel about two 14-year-old boys and school outcasts, who steal a car and strike out on a road trip. 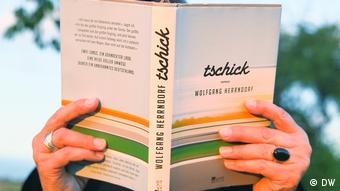 Goldenstein, for her part, graduated with a school-leaving certificate after 10th grade and completed professional training to first work in a butcher's market, then a department store, for over 37 years. She's married and now retired.

Slipping through the cracks

Yet how can it be in a developed nation like Germany, where school attendance is compulsory, that people can graduate without being able to read or write at an advanced level? Basically, because they are often scooted through school.

"My teacher didn't really notice my problems," said Goldenstein, who attended a North Sea coast village school. "I was forced to sit at the back of the class during dictation."

In the 1960s and 70s in which she grew up, teachers and parents did not pay particular attention to children with reading or writing difficulties, she said. She graduated because her spoken German was good, evening out her writing deficiencies and her overall grade. 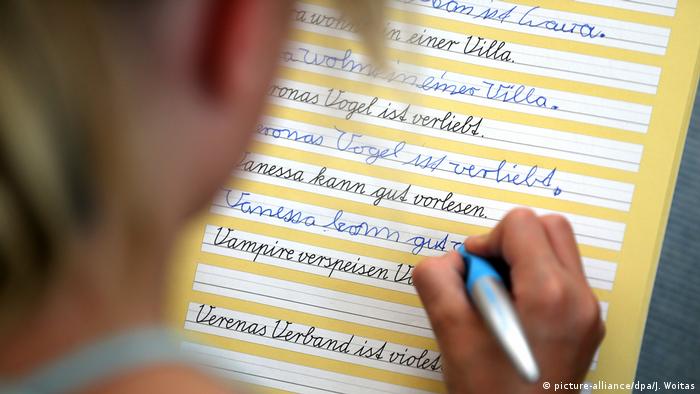 Several years ago, following severe illnesses, Goldenstein sought help after realizing that her literacy difficulties had affected her overall well-being. She took German classes at a Volkshochschule, an adult education center common in many German cities.

"I'll never be able to write really well, but I've made a lot of progress and can now do what I never thought possible: write short stories," she reflected.

Becoming a spokeswoman for a writing collective she founded with others, she has also developed into a "learning ambassador" for the Münster-based National Association of Literacy and Basic Education (Bundesverband Alphabetisierung und Grundbildung e.V.).

The association offers information about literacy classes nationwide and provides an anonymous hotline for those seeking counsel. Its "learning ambassadors," like Goldenstein, are essential. 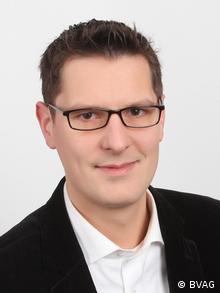 Tim Henning, of the National Association of Literacy and Basic Education

"Of the 6.2 million functional illiterates or marginally literates nationwide, only about 30,000 people attend literacy courses each year," said Tim Henning, a project director at the the association.

"We have only about 100 learning ambassadors around the country, but they are key motivators and are people others with literacy difficulties can relate to," he added.

A variety of causes

Henning said the reasons for functional illiteracy are multi-facted.

"We've found a couple of key factors, like the home environment," he noted. "If parents are not interested in education, then it proves very difficult for the child."

"The second contributing factor is the school system," he said. "If kids do not learn to read or write well in grade school, then they can rarely catch up in secondary school." Teachers may overlook the need for additional support, he said.

Other challenges may be dyslexia or attention disorders. The death of a parent or divorce may present further learning challenges to children, who perhaps cannot articulate their needs or feel isolated.

While the LEO study results were an improvement over those from 2010, the findings were nonetheless alarming.

The skills of the marginally literate vary widely. Some, like Goldenstein, are able to read and enjoy books; others do not leave their city district because they cannot discern street signs or transportation schedules.

Obtaining a driver's license is difficult because reading the test is impossible. Others cannot read operating instructions for appliances or cannot pay bills online, and communicating by e-mail or filling out tax forms is a hurdle. 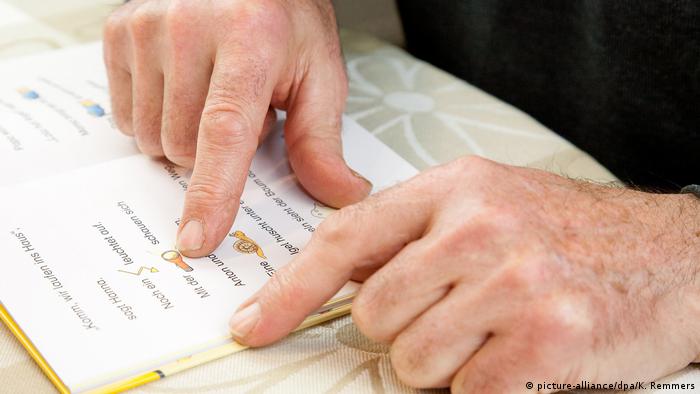 "Often, a doctors or pharmacist will give oral instructions for taking the medication," Henning explained. "That is also one of our areas of collaboration: We're working with doctors and asking them to pass on literacy information and our hotline numbers to their literacy-challenged patients because they trust them."

According to the LEO study, over 52% of those affected are native German speakers; 47% have a foreign background and learned another language first. Of the latter, 80% are proficient in reading and writing in their native language.

Two-thirds of those with literacy deficiencies are employed, with their jobs giving them a sense of self-worth as well as contributing to the work force. But, "the jobs are often menial labor, construction work or cleaning," said Henning.

However, functional illiteracy does not correlate with a lack of intelligence, experts stress.

A long and winding road

Literacy difficulties are often connected with bad luck, like with 52-year-old Christian Schröter, who is also a "learning ambassador." He grew up in what was then East Germany in a turbulent family situation, struggling and then quitting school after 10th grade without a diploma. He survived through odd jobs and carpentry work, but avoided further training.

"I would suddenly be 'sick' on the day I had to take a test," he divulged to DW.

It was decades after school that he discovered he has dyslexia.

Married for 20 years, he relied on his wife to attend to daily matters like reading the mail and completing forms. It wasn't until she fell ill that their life fell apart. Christian was unable to interpret a court order, and was forced to admit to a judge that he couldn't read the document.

Soon after, he began attending German classes, raising his literacy from 45% to 75%. 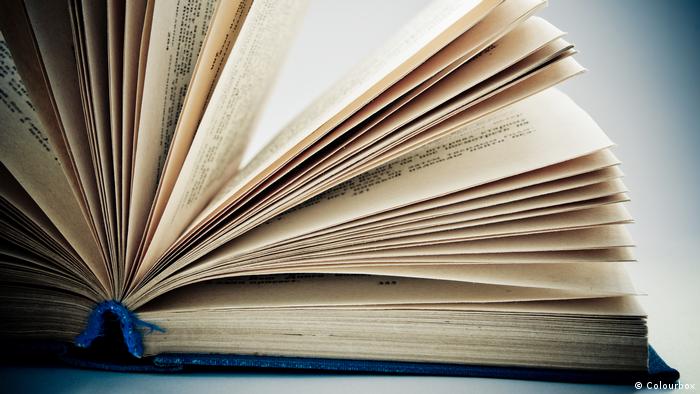 "A woman called our hotline sobbing," he recalled. "She had a baby and was distraught that she couldn't read stories to her child. She would look at pictures and make up stories."

The association was able to guide her to literacy classes.

Christian Schröter is thrilled with his advanced literacy: "It's boosted my self-confidence and improved my quality of life."

Kerstin Goldenstein agrees: "Despite my literacy challenges, advancing my skills later in life has enhanced it significantly."

"People have to realize that it's a huge problem for society when people are not completely literate. It's a political issue," she stressed.