A Life at Odds With the Germans

Pope John Paul II's only travel abroad this year was supposed to be to Germany. In the country of the Reformation, the first pope from Poland had strained relations with both Catholics and non-Catholics in Germany. 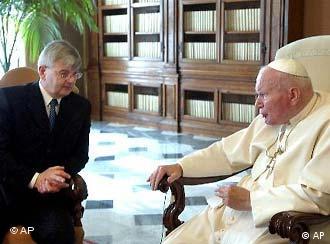 The pope and German Foreign Minister Joschka Fischer in 2003

Karol Jozef Wojtyla's first contact with Germany and Germans came under the most horrendous circumstances. He lived with his father in Krakow when Nazi Germany launched World War II by invading Poland.

The future pope said that his father once told him, "I will not live long and would like to be certain before I die that you will commit yourself to God's service." 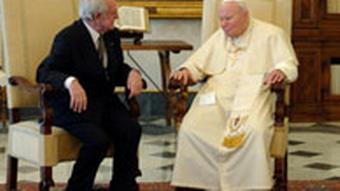 His father's will became reality. In 1943, he entered an underground seminary in Krakow. In 1946, one year after the war had ended, one year after Poland had regained its independence from the Nazi dictatorship, Karol Jozef Wojtyla was ordained.

Throughout his life, Karol Jozef Wojtyla refused to begrudge the Germans. Instead he wanted to pass on his memories of the Nazi terror to the generation that did not have to experience it in order to ensure that such a horror was never repeated.

Wojtyla's contact with Germany remained minimal in the years before he became pope in 1978. After taking up the papacy, however, he traveled to the country three times. And when the Berlin Wall fell and the Federal Republic of Germany and the German Democratic Republic (East Germany) were reunited as a single Germany, Pope John Paul II rejoiced.

In his third and only visit to a unified Germany, he visited the capital Berlin in 1996. There, John Paul II walked side-by-side with German Chancellor Helmut Kohl through the Brandenburg Gate and to what was once the inner-German border. There, he gave a moving speech over the meaning of freedom. 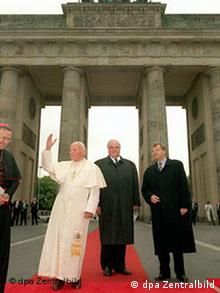 Despite his committment to bringing down communism and uniting Germany and Europe, the pope had a difficult relationship with Germans. Protestant Germans, who make up about half of the population, and even many Catholics are increasingly critical of the Vatican's conservative stance on on birth control, abortion, homosexuality, and Aids. Many regard the Pope's teachings as out of touch with modern reality. 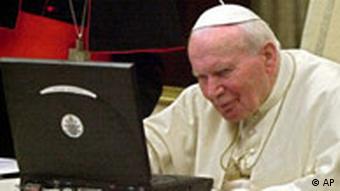 Just as exasperating to Germans are the hurdles thrown up by the Vatican to prevent a deeper ecumenical understanding. Germans and the Papacy generally misunderstand each other, a point which Cologne's conservative Cardinal Joachim Meisner makes. "In many countries people gratefully take note of the pope's prophetic power, and even praise it," Meisner said. "Unfortunately, German-speaking countries make the exception."

Another point of conflict is the protection of life. Catholics and indeed most Germans applauded when John Paul II criticized the use of force against Iraq. But, when John Paul attacked the use of force against unborn children, many Catholic Germans didn't want to hear it. The pope's stance -- protection of all humans as well as embryos -- may be consistent; but it's too inflexible for those who think that unwanted abortions could be avoided if the Catholic Church would counsel on birth control and better family planning. Instead, the Vatican banned the counseling service for unwanted pregnancies, something that some representatives in the German Catholic Church couldn't comprehend.

Other sticking points include the suspension of teaching privileges of some prominent, more liberal German theologians. Despite such decisions that many might understand as discriminatory towards Germany, never before have there been so many Germans in the College of Cardinals -- exactly the body that will name John Paul's successor.

Pope John Paul II played a larger role in current world events than any other pope in history. In Europe, his name will be inextricably tied to the fall of Communism in eastern Europe. (April 2, 2005)

Too Catholic For Munich's Airwaves?

The decision to award a Catholic radio station one of Munich's coveted FM frequencies has caused outcry among critics who say the programming is too fundamentalist. (June 5, 2004)