Once a month, Euromaxx takes you into the homes of creative people across Europe with the "360° Open House". This time it is about a house with a full 360°-view. 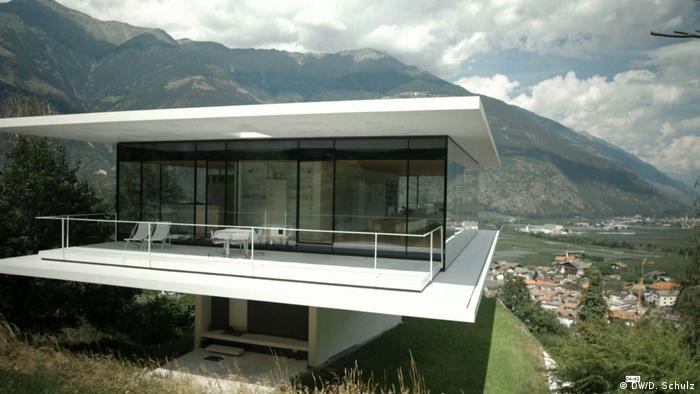 “Haus 22” seems to hover ten meters above the slope. The fragile structure rests solely on a plinth of exposed concrete.

Werner Tscholl's architecture is modern and straightforward - and so is his own house, “Haus 22”. The building has no supports along the façade, and it is held in place only by a pedestal made of white exposed concrete. That's why the all-round glassed structure seems to hover ten meters above the ground. 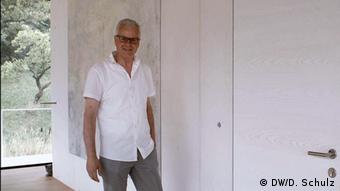 Werner Tscholl is an architectural pioneer in the Alpine region. He was born in 1955 in Latsch, in the Italian province of South Tyrol. He almost exclusively carries out large-scale projects in the surrounding area, such as the “Timmelsjoch Experience” along the border pass between the Austrian Ötz Valley and the Passeier Valley in Italy. In 2016 Werner Tscholl was voted Architect of the Year in Italy.

For Werner Tscholl, it’s important to work with local material. For the concrete of his "Haus 22" he used white marble powder mined in the nearby village of Laas. In addition to this exposed concrete from the region, another main material is used in the single-story house: the outer façade is completely made of glass, providing a unique 360° panoramic view.

The living area, which wraps around the internal concrete staircase, is divided into different zones, which are aligned according to the position of the wind or the sun. The kitchen and dining area is located south, bedroom and living area are located in the part facing north.

The construction of “Haus 22” took three years - that’s quite a long time. Werner Tscholl usually completes large-scale projects in the same kind of time, such as a redesign of the old castle Sigmundskron near Bolzano, for the building owner and extreme mountaineer Reinhold Messner, who also comes from South Tyrol. For his own house, Werner Tscholl wanted to make sure that everything would be perfect.

“Haus 22” is located in Morter, where since 2017 Werner Tscholl and his wife can overlook the entire Vinschgau valley, and they even have a view across to his birthplace, Latsch as well as some of his other buildings. It's almost impossible to live more beautifully, says the couple...

Whether it’s a loft in the city, a house by the sea or a cottage in the mountains, "360° Open Houser" presents excellent architecture, creative interior ideas and the people living inside – all over the continent.

Discover this 360°-house on your own!

Once a month, Euromaxx presents exclusive living spaces: Houses, flats and apartments all over Europe. On the Greek island of Santorini, these modern homes are hidden in two caves. (09.03.2020)

Once a month, Euromaxx takes you on a 360° tour of some of Europe’s coolest mansions, apartments and lofts. For our first episode, we head to Siusi in South Tyrol. (09.03.2020)