Once a month, Euromaxx presents exclusive living spaces: Houses, flats and apartments all over Europe. On the Greek island of Santorini, these modern homes are hidden in two caves. 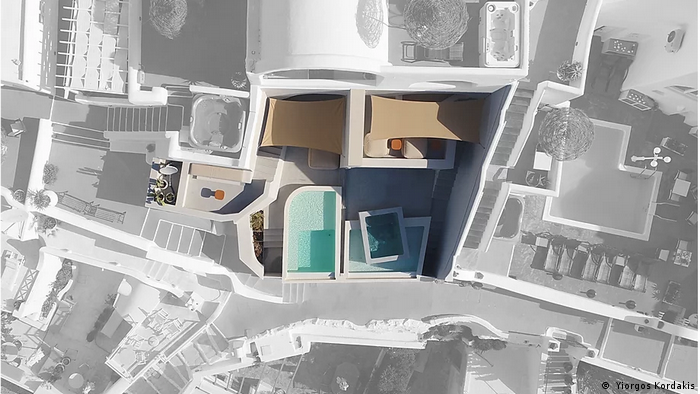 The two apartments are located next to each other and are hidden deep inside the volcano rocks. Therefore, one of the architectural challenges was to bring light into the dark.

The deep blue Aegean Sea glistening on the horizon, framed by gorges shaped by a disappearing volcano: A rare view from a cave home. It wasn't the panoramic view, however, that motivated the construction of such cave dwellings on the Greek island of Santorini, though, but rather pure necessity. Firstly, the island in the Cycladess hardly has any wood. Instead, granite and marble are used for construction. The traditional cave homes can also withstand both the winter winds and the summer heat.

For centuries, residents have been digging and constructing their flats along the rocky Caldera, which used to be a volcano. The island consists almost entirely of tuff. But the view has a fragile beauty to it: The volcano won't fall silent, and every once in a while, see quakes affect the island and destroy the caves. The last time was 1956, when dozens of homes were buried. Today, there are just a few remaining cave homes on Santorini, where property prices are among the highest in Greece. 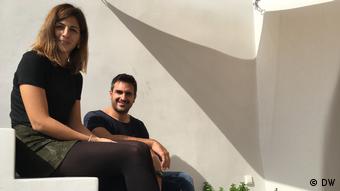 The young architectural firm Kapsimalis Architects has transformed two caves into modern homes. The project's goal was to create two completely different homes that are distinct in their design. The siblings Marianna and Alexandros Kapsimalis were raised on the island. The volcanic rock, the dramatic landscape and the ever-changing weather have a great influence on their work.

The compact arrangement of rooms in the caves were a big challenge for the architects. The transport of construction material was difficult, too: only donkeys could be used for transport through the narrow alleyways.

The house to the left has 110 square metres, split into an open kitchen with a dining area, an en suite bedroom, a shower with a sauna, a hammam and relaxation room, as well as a small extra-room. The elongated cave is designed as a sculptural space with clear references to its archaic origin. The earth-coloured shades turn darker from room to room until they reach the anthracite-coloured bathing area.

The second house, to the right, offers the greates possible contrast - the main idea was a futuristic space. The open 70 square metres are therefore dominated by the interior wall covered in reflective glass, which contains both a TV, as well as the bathroom door. Here, neon light, glass and sharp lines are contrasted with the gentle curves of the cave's interior.

Both caves have floor-to-ceiling glass doors, offering a view onto the volcano and the neighbouring white houses - a stark contrast to the dark interior. The homes are also connected by the front yard containing both pools. It can be shared or split into two private spaces through a sliding door.

Despite the many changes, Marianna and Alexandros Kapsimalis have created designer homes that blend into the Santorini's volcanic landscape and the traditional cubistic architecture perfectly.

Once a month, Euromaxx takes you into the homes of creative people across Europe with the "360° Open House". This time we are heading to the British capital. (09.07.2019)

Once a month, Euromaxx presents exclusive dream homes: Houses, apartments and flats from all over Europe. Schminke House, a modern classic designed by Hans Scharoun, is located in Löbau, Saxony. (18.11.2019)