The top wildlife photographers of 2018 have been crowned, with South Africa's Skye Meaker taking top honors in the youth category. Meaker tells DW of how he got his start — and of the challenges of working with leopards.

Slipping and sliding through the steep slopes and lush undergrowth in central China, waiting for hours for the ideal lighting conditions and a chance gust of wind in Botswana — the 2018 winners of the Wildlife Photographer of the Year competition went to great lengths to capture the perfect shot.

This year's grand prizewinner is Dutch photographer Marsel van Oosten, who snapped an incredible shot of two golden snub-nosed monkeys in the temperate forest of China's Qinling Mountains, their only habitat (see gallery above). Roz Kidman Cox, chair of the judging panel, called it a "symbolic reminder of the beauty of nature and how impoverished we are becoming as nature is diminished." 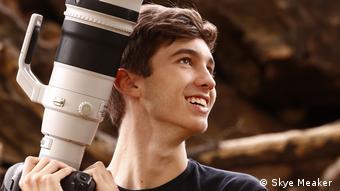 Skye Meaker, winner in the youth category, got his start in the wilds of Africa with a disposable camera

Youth category winner, 16-year-old Skye Meaker (pictured left), captured his winning close-up portrait of a female leopard dozing in the branches of a nyala tree at a Botswana game reserve after searching for the feline for hours.

Once he tracked her down, it was a test of patience as he waited for the wind, the light and the leopard to cooperate.

"She would sleep for a couple of minutes. Then look around briefly. Then fall back to sleep," recalled Meaker. All the while, he found the best position just a few meters away and composed the shot, trying different settings until the moment was right.

"With precisely executed timing and composition, we get a coveted glimpse into the inner world of one of the most frequently photographed, yet rarely truly seen, animals," said competition judge and award-winning photographer Alexander Badyaev of Meaker's image.

Meaker, who has ambitions to become a professional nature photographer, has been following the leopard, known as Mathoja, with his camera for the past seven years — ever since she was a cub. He and his family have developed a relationship Mathoja, they say, and regularly visit the reserve hoping to catch a glimpse.

Starting October 19, the general public will have the chance to discover these award-winning photographs and 98 other entries at London's Natural History Museum. The international competition, in its 54th year, attracted more than 45,000 professional and amateur entries from 95 countries.

Ahead of the exhibition, Meaker — a finalist in the competition in 2014 — answered a few questions for DW from his home in Durban, South Africa.

Read more: Five arresting images of climate change that are impossible to ignore 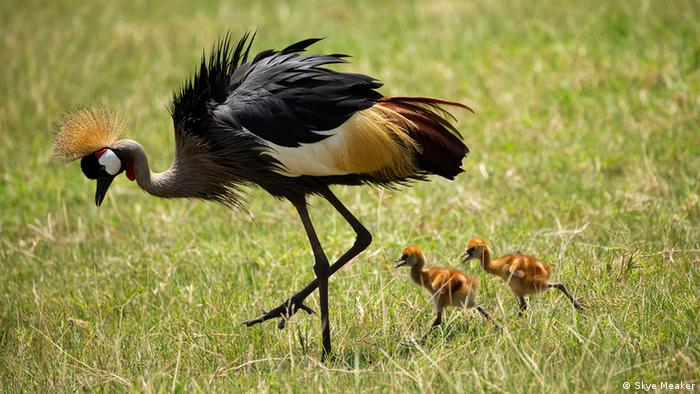 DW: You began taking photos at an early age, and say that you "instantly fell in love with wildlife photography." Do you remember your first images?

Skye Meaker: I started taking photos when I was 7-years-old with a disposable camera — taking pictures of everything and anything. My parents were always in love with the bush, so that's what sparked my passion for wildlife. My dad always had his camera with him, so that's how I fell in love with the photography side of nature.

I remember my first picture was of a male impala doing nothing. It wasn't a good shot, as it was blurry and I composed it poorly, but from then on I fell in love with wildlife photography.

Your winning photo, a portrait of a dozing leopard in the Mashatu Game Reserve in Botswana, captured a member of this vulnerable species in an intimate moment. Had you photographed Mathoja before? How challenging was it to track her and get the perfect shot?

Since seeing my first leopard, I became obsessed with the things; it was something about how elusive and mysterious they were, not to mention how beautiful. My winning picture is of a female leopard named Mathoja, which means "one with a limp." The guides and those that visit Mashatu Game Reserve frequently call her 'Limpy.' She got this name from falling out of a tree as a cub, which damaged her hind leg, making it difficult for her to climb trees.

I've been taking photos of this leopard since she was just older than a cub, and had the opportunity to grow as a photographer and watch her grow to having her own cub over the past seven years. That has allowed me to get quite close to this leopard in particular.

It took us a couple of hours to find her and to position myself to take this photo, and in this time I was constantly trying different settings while she was asleep. The hardest part about taking this image was how I had to wait for the wind to blow a branch just above her face to let in the light I wanted, and at the same time have her open her eyes.

Using photography as a conservation tool

In your time taking wildlife photos, have you begun noticing any effects of climate change, in South Africa or other areas?

[Over the last 10 years,] I've definitely noticed it in the places I visit regularly, like Mashatu, where the drought season is becoming longer, and how the rainy season is coming at irregular times every year.

What have been some of your most memorable photo expeditions?

My most memorable trip was to the Ngorongoro Crater in Tanzania, which is an extinct volcano. A place I really want to go at the moment is India.

What do you hope people take away from your images?

The goal of my photography is to show how beautiful our natural world is, and how [we can] protect it, as well as to inspire other young photographers. But my next [immediate] goal is to win the Rising Star Portfolio Award in the same competition, and to improve my photography to the point when I can win the overall grand title of Wildlife Photographer of the Year.

I will always do photography and be involved with wildlife, as it is my passion.

The top 100 best images of the 2018 Wildlife Photographer of the Year competition are on display at the Natural History Museum in London until summer 2019. The exhibition will also go on tour across the United Kingdom and to countries including Canada, Spain, the United States, Australia and Germany.

Fiji was once synonymous with a tropical paradise. But global warming and severe storms are now threatening the very existence of the islands. Fiji-born photographer Aaron March captures the fragile nature of his home. (08.11.2017)

From laughing zebras to goofy grizzlies, the Comedy Wildlife Photography Awards celebrates 2016's funniest snaps of animals - and asks us to think about their future. (24.11.2016)

Even in a world awash with images, art still has the power to draw attention. But can it trigger social change? The PangeaSeed art collective hopes so. (24.11.2015)