Indonesia election puts Islam on the ballot | Asia| An in-depth look at news from across the continent | DW | 15.04.2019

The election campaign for Indonesia's next president has been dominated by the role of political Islam. Experts say the young voters, who comprise a big chunk of the electorate, are in support of conservative Islam. 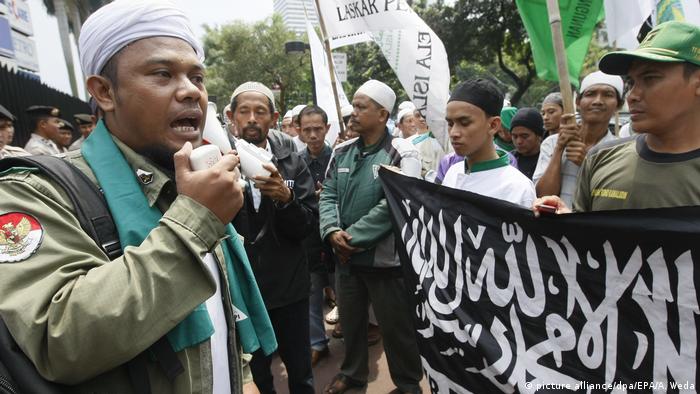 More Muslims live in Indonesia than anywhere else in the world, and on April 17, the country is electing its next president. Since Indonesia embraced democracy in 1998, it has provided a strong example for the separation of religion and state.

However, today the political situation in Indonesia seems to have changed. "The role of religion should not be underestimated. It provides the means to operate in politics and it is used by all sides," Susanne Schröter, director of German research institute Global Islam, told DW.

Indonesia's current president, Joko Widodo, popularly known as Jokowi, is running against ex-general Prabowo Subianto, who has attacked his opponent for not being sufficiently Islamic. For example, Jokowi has been accused of not being able to recite the Koran in proper Arabic. Jokowi's election team is also trying to improve their candidate's religious reputation by claiming that he attended a Muslim school.

The impact of Islam on today's Indonesian politics was made very clear during the 2017 Jakarta gubernatorial elections. Basuki Tjahaja Purnama, popularly known as "Ahok," was the Indonesian capital's first non-Muslim governor in over 50 years, as well as its first ethnic Chinese leader. During a campaign speech in late 2016, he was accused of making disparaging remarks about the Koran.

In response, radical Islamist organizations organized massive street protests in November and December 2016, during which hundreds of thousands of demonstrators took to the streets. In May 2017, Ahok was charged with blasphemy  and sent to jail for 21 months.

Indonesia expert Berthold Damshäuser said that the verdict was a scandal and was a strong example of "growing religious intolerance" in Indonesia. According to Damshäuser, many young Indonesians support the implementation of Shariah law, and a small percentage of them even support violent action against "enemies of Islam." A study by Saiful Mujani Research Consulting showed that 30% of voters in 2017 were between 17 and 34 years old.

Where did Indonesia's Islamist groups originate?

The source of Indonesia's growing Islamization comes from both inside and outside the country. According to expert Schröter, the roots of today's Islamist groups extend to World War II, and the fight for Indonesian independence.

After Indonesia won its independence, these groups were unable to assert themselves politically. Indonesia was not to become a religious state. Instead, former President Sukarno applied Indonesia's national ideology, Pancasila, which is also found in the preamble to the constitution.

Pancasila calls for national unity in a multiethnic state. It encompasses five principles, which include belief in religious plurality, democracy and social justice.

President Sukarno was followed by Suharto, an authoritarian ruler who didn't give much space to ultra-conservative Muslims.

According to Schröter, after democratic reforms took hold in 1998, Islamists were suddenly thrust into the public arena and found room to organize. Since then, the influence of conservative Wahhabism, originating in Gulf countries like Saudi Arabia, has taken hold in Indonesia's education system.

Schröter points out that scholarships are being given to Indonesian students who study in places like Saudi Arabia and then return to Indonesia with ultra-conservative ideals, which they can spread in their peer groups.

Islamic schools, called "Pesantren," are plentiful in Indonesia, and according Damshäuser, some of them are supported by foreign funding and teach a conservative interpretation of Islam. It is therefore no coincidence that young Indonesian's are becoming more radicalized.

Part of the problem, according to Schröter, is that Indonesia's political elites have failed to adequately express the importance of democratic values held in Pancasila and in Indonesia's democratic constitution.

During Jokowi's first term, Schröter said the president had "failed to fulfill" the high expectations placed upon him, whether with human rights or in combating the growing Islamization of Indonesia.

"The political elite in Indonesia is often willing to betray their ideals in favor of populism," said Damshäuser, adding that Jokowi may have a larger strategy.

"What is more dangerous: the increasing Islamization or an open division of the country?"

Damshäuser said that Jokowi, as president of a multiethnic state with a long history of internal tension, would be willing to make concessions so as to not risk the stability of the country.

"It is possible that Jokowi is hoping to integrate and appease Islamist forces in Indonesia," he said.

Whether or not Jokowi can succeed in bringing all sides together is far from certain, but according to Damshäuser, it is very unlikely that Indonesia will either regress toward authoritarianism, or turn into an Islamic state.

Read more: Indonesian Islamists rally in Jakarta in a show of force

The Indonesian government and Greenpeace have partnered with Islamic organizations to promote plastic waste reduction. Can including religion make environmental campaigns more effective? (14.06.2018)