Indonesia debates nudity after resort ′fixes′ topless mermaid statues | Asia| An in-depth look at news from across the continent | DW | 28.03.2019

Recently, an entertainment resort in Indonesia covered up statues of mermaids in an attempt to be more 'family-friendly.' The incident has stirred a debate on nudity and "immoral" conduct. 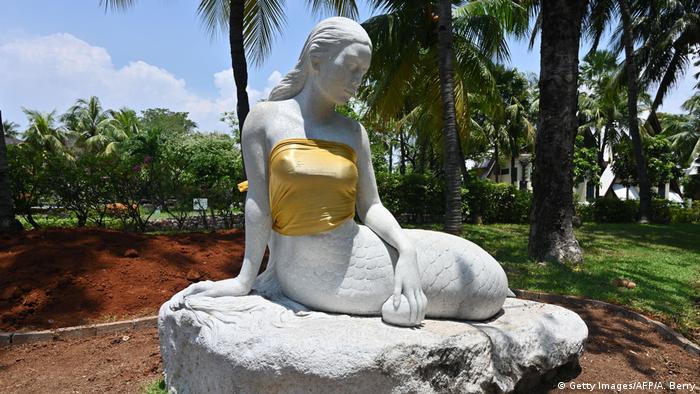 Three mermaid statues in Taman Impian Jaya Ancol (Ancol Dreamland), a resort destination in Indonesia's capital Jakarta, have been a topic of discussion in the country's social media networks for a strange reason: the upper parts of the statues were covered with strips of gold-colored cloth to hide indecent exposure.

Rika Lestari, communications manager of P.T. Pembangunan Jaya Ancol, the company which manages Ancol Dreamland, said that they took these measures without being pressurized by anybody. Lestari explained to Indonesian website detik.com that the breasts of the statues were covered for the sake of "comfort," since the Dreamland was intended for families. The statues were being fixed "to make them look better," she said.

She claimed that this step would not affect the quality of service in Ancol Dreamland, which was developing new facilities and would soon have a floating mosque.

Ancol's attempts to cover the mermaid statues has sparked a lively debate on social media, where many users made fun of it.

Kalis Mardiasih, a renowned female author wrote mockingly in her tweet: "Still don't understand why the mermaid's breast is covered with cloth and in such a way that the nipples can be seen. Can people not put a bra first on the mermaid under the cloth? Perhaps the mermaid is a role model for no-bra day."

Others pointed out that bare breasts were not really a strange new thing in Indonesian culture, putting up pictures of Balinese women.

Reacting to the picture, another user said, "Somehow I don’t feel that this picture is indecent or pornographic. The women look great and their posture is very good."

Respect for culture or vandalism?

Hari Budiono, a renowned painter, criticized the steps taken by P.T. Pembangunan Jaya Ancol to cover the mermaids. In an interview with Indonesian website alinea.id, he said that the action was a "vandalism of art work." According to Budiono the statues did not display anything immoral and therefore did not deserve to be covered or considered unethical.

Art critic Agus Dermawan T said the managers of Ancol Dreamland had taken a "silly action" and their attitudes revealed a deterioration in the way of thinking. This was a setback in the appreciation of art and seemed to be a bit hypocritical, he told Indonesian media.

The mermaid is not the first 'victim' 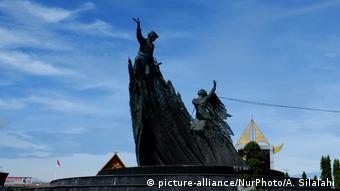 The Zapin monument in Pekanbaru, Riau

The mermaid statues in Ancol Dreamland are not the first statues in Indonesia to have been the center of controversy. In 2010, the statue of Tiga Mojang by famous sculptor Nyoman Nuarta was removed. The 19-meter-high installation depicted three women wrapped up tightly in cloth. It was removed after FPI (Islamic Defenders Front) launched a protest.

Authorities in Indonesia's Aceh province have publicly caned two men for having sex with each other. The punishment has come to symbolize a wave of officialized homophobia in the archipelago nation. (23.05.2017)

Indonesia's parliament speaker has called for reforms to the criminal code that would outlaw any sex outside of marriage, including gay sex. Critics say the bill would also weaken checks and balances on democracy. (06.02.2018)