Indonesia election pits populism against the status quo | Asia | An in-depth look at news from across the continent | DW | 17.01.2019

The campaign for Indonesia's presidency has officially kicked off with a debate between incumbent President Joko Widodo and populist challenger Prabowo Subianto. Observers say both candidates failed to impress. 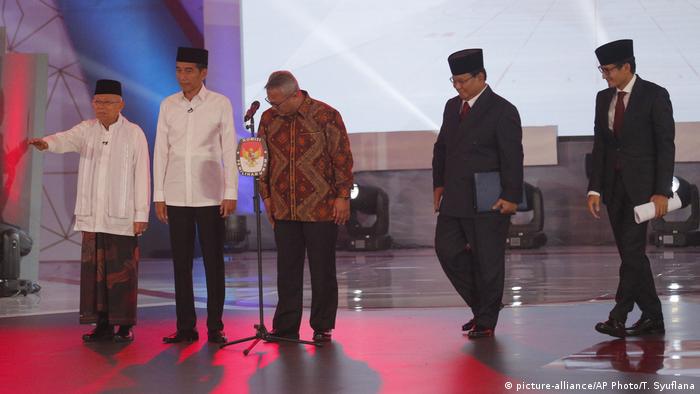 Indonesian President Joko Widodo and the former army general Prabowo Subianto squared off in Jakarta on Thursday in the first of five debates leading up to the country's presidential election on April 17. The debate focused on government corruption, law enforcement, terrorism and human rights, which are all important issues for Indonesia's 190 million voters.

According to polls, incumbent Widodo currently enjoys a majority of support among voters, but he still faces a strong populist campaign from challenger Subianto, who promises improvements in Indonesia's lagging social services and institutions, along with a crackdown on corruption and terrorism.

During the debate, President Widodo promised that Indonesia would become an "advanced country," with better-equipped law enforcement institutions to help guarantee civil rights. According to him, the way to get this done is by streamlining cooperation between the country's corruption eradication commission, prosecutors and the police.

Subianto said Indonesia's path to success is rooted in "self-sufficiency." He emphasized the importance of ensuring domestic supplies of food, fuel and clean water, along with championing national industry.

Rather than building better institutions, Subianto's strategy to tackle corruption is to pay officials enough so that they will "do their jobs" and not engage in graft.

Lalola Easter Kaban, a researcher at Indonesia Corruption Watch (ICW), told DW that both candidates were "too general" in describing their vision for eradicating corruption.

"There are no clear derivatives for implementing the vision and mission," said Kaban, adding that outlining policy specifics during debates is vital to understanding what policy can be expected over the next five years. 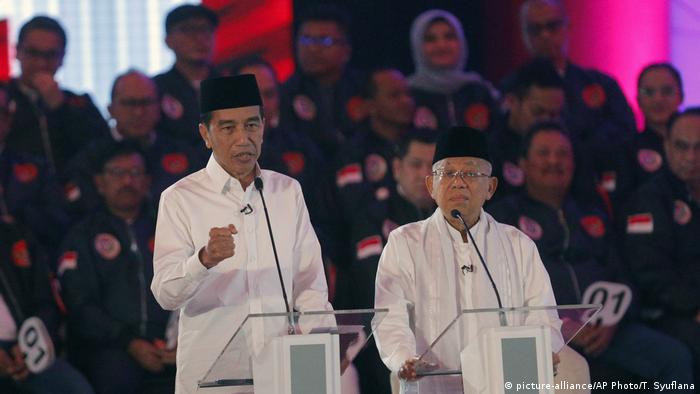 Indonesia has a dark history of human rights abuses, with President Widodo addressing the "burden" of the past, while admitting that it is "not easy" to solve those cases in the present.

On the other hand, Subianto has himself been accused of human rights violations during his time as a military officer in the 1990s under Suharto, Indonesia's former strongman president.

Human rights issues involving transparency, surveillance and due process are also caught up in Indonesia's fight against  terrorism.

"Officials must maintain a perspective on human rights," said Widodo Thursday when referring to terrorism. "We have to focus on social, economic, cultural and religious approaches, and more importantly, transparency in the prosecution process."

Subianto reemphasized the importance of public investment in fighting terrorism. "We will invest heavily in education and health, boarding schools and teachers; because they will influence people to not feel hurt or hate so that they commit terror."

"If I become president, I will invent a lot of money for police, intelligence and the armed forces so that we can reduce terrorism," said Subianto.

"I see that the two presidential candidates do not have a clear vision and strategy to fulfill human rights obligations, especially in overcoming past cases of gross human rights violations," he said.

"To solve the human rights problems depends on the strong political will of the president. Both Widodo and Subianto have not been able to convince voters how they can break the deadlock in disclosure and investigation," he added.

"Subianto, who is strongly suspected of being a serious human rights violator in the past, has a very unclear vision of this," said Awigra. "Widodo is unable to get out of the confines of those around him, who are also allegedly human right violators in the past." 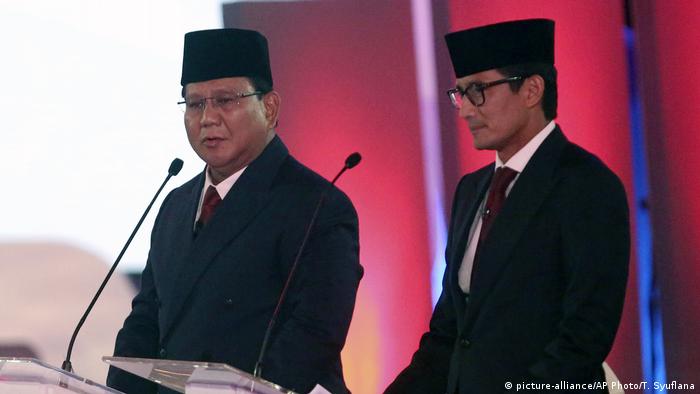 Across all of the issues, Subianto's populist solution is big on promises for "national strength" in a society he portrays as being in poor shape.

In his first campaign speech on Monday, Subianto presented his plan for a "victorious Indonesia" and a so-called "big push" strategy promising better infrastructure and industry.

In December 2018, thousands of Islamists marched in the capital Jakarta to mark the second anniversary of the toppling of Jakarta's Christian ex-governor, Basuki "Ahok" Tjahaja, a Widodo ally who resigned because of blasphemy accusations and was jailed for two years.

Subianto attended the December rally and gave a short speech telling the crowd that Islam "unifies" Indonesia and "will maintain peace for everyone."

Indonesia has the world's largest Muslim-majority population. Subianto hopes to win the upcoming election by expanding his base beyond conservative Muslims.

However, according opinion polls reported by the Associated Press, Subianto's populist message is not resonating beyond his base and his support currently lags behind President Widodo by 25 percent.

Polls also show that 10 percent of voters are undecided and another 15 percent are swing voters, indicating that the race has the potential to tighten in upcoming weeks. For Subianto to defeat Widodo, his populist message will need to resonate beyond his base and break into Widodo's electoral strongholds in Central and East Java.