Jakarta′s ex-governor Ahok freed from Indonesian prison | Asia| An in-depth look at news from across the continent | DW | 24.01.2019 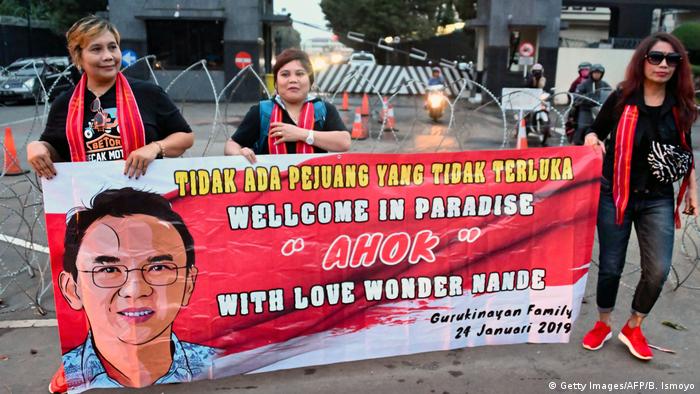 The former governor of Jakarta, Basuki Tjahaja Purnama, popularly known as "Ahok," was released from prison Thursday after spending nearly two years behind bars on blasphemy charges. According to Indonesian media reports, he was released three months early for "good behavior."

The 52-year-old had been imprisoned at a paramilitary police headquarters in Depok, located south of the Indonesian capital. According to the Jakarta Post, he was picked up by his son and left the compound while avoiding the media and a crowd of supporters who had gathered to greet him.

Ahok, an ethnic Chinese Christian, was the Indonesian capital's first non-Muslim governor in over 50 years, as well as its first ethnic Chinese leader. His 2017 blasphemy conviction raised international concern over the growing influence of Islamic hardliners in Indonesia and the erosion of tolerant Islam in the world's largest Muslim-majority country.

During the 2016 campaign for Jakarta governor, Ahok said during a speech that his opponents were deceiving voters by asserting that the Quran prohibits Muslims from choosing a non-Muslim leader. A video of his statement went viral and resulted in massive riots in Jakarta led by Islamist activists who accused him of insulting the Muslim holy book.

Ahok consequently lost his re-election bid to Muslim candidate Anies Baswedan, and around a month later, he was convicted by a five-judge panel of " legitimately and convincingly" conducting a "criminal act" of blasphemy.

What's next for Ahok?

After his release, Ahok's son posted a photo on Instagram with the caption, "My dad's a free man! Thank you everyone for the support."

In a handwritten letter published on Instagram shortly before his release, Ahok said that he now prefers to go by his initials, BTP. He also apologized to Jakarta civil servants and those he had "offended" by being "rude and arrogant."

It remains uncertain if Ahok will return to politics. According to media reports, the former governor is planning to enter the oil business and become a talk show host on Indonesian television. However, Ahok did urge his supporters to vote in Indonesia's upcoming presidential election.

The Associated Press reported that one of Ahok's former accusers warned Ahok not to "repeat a mistake" and cause unrest among Muslims. "Islam is not his realm to be critical of," said a member of the "Islamic Defenders Front." Islamists protest against Ahok in 2017

Religion and politics in Indonesia

Before his imprisonment, Ahok had been a popular politician known for cracking down on corruption and making improvements in infrastructure. He remains popular with progressive Indonesians and is a close political ally of Indonesian President Joko Widodo, who is currently running for reelection.

There are fears that the presidential election planned for April could be marred by similar religious and racial tensions that affected the Jakarta governor race in 2017.

"Ahok’s unjust conviction is a reminder that minorities in Indonesia are at risk so long as the abusive blasphemy law remains in place," Elaine Pearson, Australia director of Human Right's Watch said in a statement.

President Widodo's main opponent, former general Prabowo Subianto, was a supporter of the 2017 protests against Ahok.

Susanne Schröter, an Indonesia expert at the Johann-Wolfgang von Goethe University in Frankfurt, told DW in 2017 that Indonesia was "truly divided."

"Indonesia has long been known as a country that practices a tolerant and moderate form of Islam. This still exists. Furthermore, people that speak out for a multicultural Indonesia do exist. But it is these people that are increasingly challenged," she said.

"It is difficult to say in which direction the country will go by 2019. What is clear, however, is that the political climate is increasingly embittered and that many liberals are scared due to government inactivity in the face of Islamist violence," she added.

"There is a big danger here that if these tensions spill over, Indonesia's society will radicalize even further."

Joko Widodo (Jokowi) has been criticized for giving too much room to Islamists in Indonesia, but it seems the president is finally taking a decisive action. Rights groups fear that new measures could curb civil rights. (20.07.2017)