Germany's highest criminal court has ruled that doctors do not have to pay damages for prolonging life by artificial means. A son had sued a doctor for keeping his father alive for years with a feeding tube. 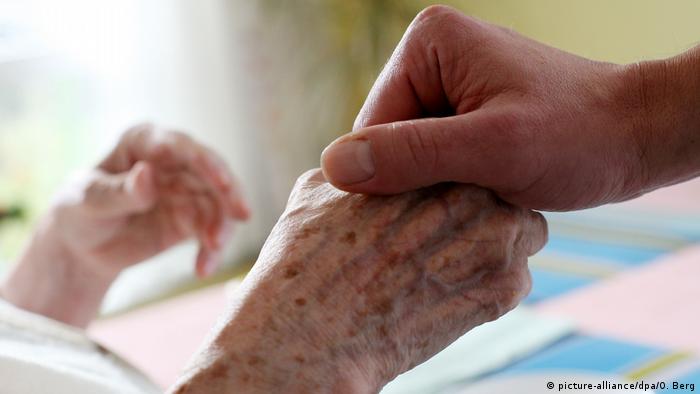 A doctor is not financially liable for prolonging their patients' lives by using feeding tubes, ventilators or other artificial means, Germany's Federal Court of Justice (BGH) ruled on Tuesday.

The high court ruling was being watched anxiously by doctors, as it could have had serious legal implications for medical practitioners providing end-of-life care to seniors and patients in vegetative states.

What the court decided:

Close up - Living with Dementia - A Question of Dignity

The case concerned a man, who lives in the United States, and who sued a general practitioner on his father's behalf after he died in 2011 at a nursing home in Munich.

The father suffered from dementia and other illnesses and was no longer able to move or speak. In 2006, doctors put a gastric tube in the man, keeping him alive for years although his condition continued to deteriorate and there was no chance of improvement. He hadn't written a will or stated his preference concerning life-prolonging measures.

The son argued that the doctor's decision to keep the tube in prolonged his father's suffering, especially in the year before his death.

He'd initially sued the general practitioner for €152,000 — the majority of which was for pain and suffering damages and €52,000 of which to recover the cost of treatment and care costs incurred since the beginning of 2010 till his death in 2011.

A lower court ruled in favor of the doctor, but the higher regional court in Munich ruled in 2017 that the doctor needed to pay the man €40,000 in damages. It was appealed and ended up at the Federal Court of Justice.

No one entitled 'to judge the value of a life'

In the appeal, the son urged the high court to deliver a landmark verdict on whether or not the doctor violated his duties to his patient. He and his lawyer argued that doctors only adhere to medical standards when they are made legally liable for violating them, and that this should apply to end of life care as well, the Süddeutsche Zeitung reported.

The high court judges said they could not determine whether the doctor failed his duties to his patient, as it concerns the question about the value of prolonging someone's life.

"No third party is entitled to judge the value of a life," presiding judge Vera von Pentz said.

The German Medical Association welcomed the ruling, saying that decisions on end-of-life care are decisions that should be made between a doctor and their patients or family representatives.

"If prolonging someone's life could be qualified as harm, then a decision about when a life is worth living and when it represents harm would have to be taken separately from the patient's will," association president Frank Ulrich Montgomery said, according to news agency KNA.

"That is not a humane approach," he added.

Researchers from Germany and Switzerland have teamed up to investigate the effects of music on the brains of elderly people. DW talked to the research leader about the challenges and possible outcomes of the study. (31.12.2017)

Jens Spahn has hindered the provision of lethal drugs to the incurably ill despite a ruling allowing it, a report says. Critics say that verdict could, however, conflict with the German constitution. (19.02.2019)