A Frankfurt music festival turned an astronaut training plane into a zero-gravity nightclub. Some 30 partygoers got to dance on the ceiling during the four-hour roller-coaster ride in the sky.

It was one small step for man ... one giant party for mankind. A music festival took its guests to new heights on Wednesday as they experienced weightlessness on a zero-gravity plane.

Event organizers Big City Beats chartered the ZeroG-Airbus, a research plane that is used to train astronauts from the European Space Agency (ESA), as part of the annual World Club Dome music festival in Frankfurt.

Read more: Berlin celebrates the power of techno as the Tresor turns 25

The four-hour trip from the German city flew over the Mediterranean, providing its guests on board a total of five minutes of zero-gravity. The plane generated the in-flight weightlessness by doing a total of 16 parabolic flights where it does a controlled drop out of the sky.

A total of 30 people took part in the event after winning their tickets in a video competition that drew over 30,000 applications. The daredevil dancers, aged 18 to 33, came from all around the world, including: the USA, Brazil, Morocco, Spain, Germany, and Australia. 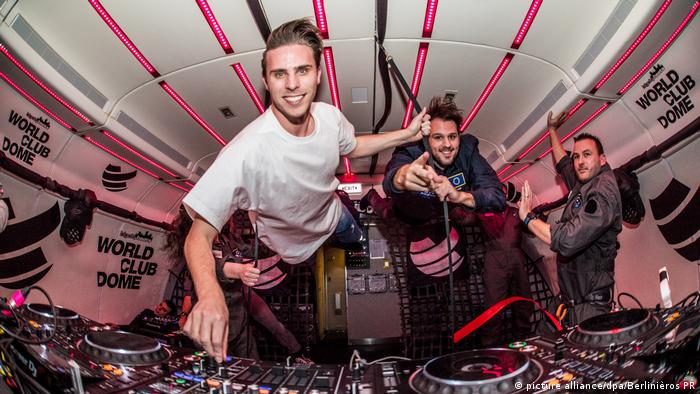 "It was one of the most insane experiences that I've ever had. Sitting on the ceiling — that was crazy," DJ Steve Aoki said after the flight. He provided the in-flight music for the guests along with the Dutch electronic music duo W&W.

"You take a step into the unknown and you're a bit scared," Wardt van der Harst of W&W said. But after the first maneuver, "everyone thought it was pretty cool," he added.

The flight also included two ESA astronauts as well as doctors who were ready to jump in in case of a medical emergency. Besides a little bit of nausea and a few pale faces, all the partying-passengers made it through the trip unharmed. No alcohol was allowed on the flight.

"It was an opportunity to do something that not everyone can do," said one of the passengers, a German man named Pascal Hug.

A total of 15 World Club Dome Zero Gravity flights are currently in the works. If you don't want to wait for the ticket this year, you can already privately rent the plane yourself — to the tune of €6,000 ($7,366) per ticket.

Editor's note: The original version of this article suggested that a zero-gravity party flight was a world-first. This is not the case. However, this project claims to be the first to try to make it a regular event. We apologize for the confusion and have altered this article accordingly. (09.02.2018)

How to wash your hair in space

How to wash your hair in space