Zakir Naik: India seeks to extradite Islamic preacher in Malaysia | Asia | An in-depth look at news from across the continent | DW | 17.06.2020

In the latest string of accusations, fundamentalist preacher Zakir Naik has come under fire for allegedly having met one of the accused in February's Delhi riots. New Delhi is calling for his extradition from Malaysia. 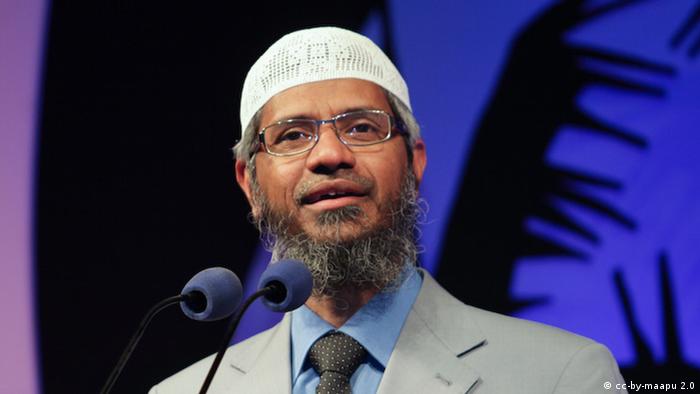 Controversial Indian Islamic preacher Zakir Naik is the latest suspect introduced by Indian authorities in their investigation into the February Delhi riots, Indian news outlet The Quint reported on Wednesday.

In an application filed by the Delhi police on June 15, the police alleged that one of the accused in the riots, Khalid Saifi, met the preacher abroad and sought his support for "spreading his agenda." Zaik, a fugitive now in Malaysia, denied knowing or having met Saifi, according to The Quint.

The incident has renewed political and religious debates surrounding the controversial preacher. On May 14, India requested the extradition of Naik. The fundamentalist preacher has lived in exile Malaysia for more than three years and has permanent residency in the Southeast Asian country.

Naik faces charges of hate speech in India, as well as money laundering. He is accused of acquiring $28m (€25 million) worth of criminal assets to buy property in India and finance events where he made "provocative speeches," a claim he denies. He has repeatedly denied accusations that he provokes religious violence and says the media has "resorted to doctored video clips and a host of dishonest schemes" to accuse him of terrorism.

Experts have commented that the complex political nature surrounding Naik's case – coupled with growing religious tensions in the region – can make the extradition even more difficult.

Who is Zakir Naik?

A proponent of the hardline Salafi school of thought in Sunni Islam,Naik promotes a radical form of Islam on the channel, Peace TV. The satellite television network has been banned in India but has an estimated 200 million viewers worldwide. Based in Dubai, Peace TV is owned by the Islamic Research Foundation (IRF), a group headed by Naik.

The preacher also holds a degree in medicine and – defying the traditional dress of a Muslim cleric – he is usually seen wearing a suit with a Taqiyah (skullcap).

It was not until July 2016 when he really came to international attention, after a deadly attack on the Holey Artisan cafe in Dhaka, Bangladesh. Naik was accused of inspiring one of the gunmen through his speeches, an allegation he vehemently denies and accused Bangladeshi media of sensationalism.

In November 2016, India's counterterrorism agency filed an official complaint against Naik, accusing him of promoting religious hatred and unlawful activity. The following year, Naik sought asylum and moved to Malaysia.

Since moving to Malaysia, Naik has allegedly received funding for the IRF from Qatar, Turkey and Pakistan. The reports have emerged during a time when Turkey, Pakistan and Malaysia ramped up their criticism of India's treatment of its Muslim minority population.

"Malaysia, Turkey and Pakistan are somewhat modern Islamic states, which are trying to reconcile Islam with business, science and economics. They won't go against a preacher like Zakir Naik, who is ultimately promoting Islam," said Atul Singh, the founder of Fair Observer, a US non-profit media organization. "He serves their interests to have cultural influence among Indian Muslims."

Other experts see Naik as part of Malaysia, Turkey and Pakistan's broader ambition to seek an alliance.

"Turkey and Pakistan are trying to become soft powers to tackle Islamophobia. At the end of the day, Turkey, Pakistan and Malaysia are bonded by Islamic symbolism," said Hajira Maryam, a researcher with Turkey's international broadcaster, TRT World.

'Inspiring' IS and al-Qaeda

India continues its struggle in garnering international support to extradite Naik. Interpol has already refused to issue a Red Notice for Naik on three occasions.

"India wants to extradite Naik as he is abusing his power to promote a negative picture of India. New Delhi is also concerned about the impact of Naik on the Muslim youth in the country. There are several sleeper IS cells in India that have been motivated by him", said Sreeram Chaulia, a dean at the Jindal School of International Affairs in Sonipat.

In the past, detained al-Qaeda followers have reportedly told officials that Naik was a significant influence on them. He has also been criticized in India for his views on topics including jihad, Hinduism and women's rights.

Singh said that while "India is primarily seeking to extradite Naik because he has criticized Modi and talked about Islamic supremacy," "we can't discount the fact that Zakir Naik is an authoritarian fundamentalist." According to Singh, Naik "believes it is permissible for men to beat their wives 'lightly' and that Muslims have the right to have sex with their 'female slaves.'" He added: "At some point, you have to stand up for individual rights against religious rights. Zakir Naik deserves prison, not a platform."

Some critics argue that New Delhi's calls for Naik's extradition are a part of its Hindu-nationalist agenda.

In January 2018, Justice Manmohan Singh of the Appellate Tribunal for prevention of money laundering pointed out that the Enforcement Directorate (ED), India's financial crimes watchdog, acted swiftly in trying to take over Naik's properties in India, but was slow in taking action against powerful Hindu figures with criminal cases against them.

"Hindu extremists in India are using certain statements of Naik to justify their move to extradite him. Naik was once asked about Osama bin Laden's ideology of jihad. He strictly opposed the method bin Laden used, but people latched onto his interpretation of jihad. If a person misinterprets Naik's teaching and commits a crime, it's unfair to pin it on Naik," said Naeem Baloch, a researcher at Pakistan's Geo News and visiting professor at the University of Central Punjab in Lahore.

"Zakir Naik has no concern with politics nor is he interested in taking part in any type of political movement," he added.

Malaysia may not give up Naik

Malaysia has not yet commented on Naik's extradition. Analysts say that Malaysia's decision on whether to extradite Naik depends on both religious and political factors.

"The current regime of Malaysia is more Islamic than the previous one owing to the influence of the Pan-Malaysian Islamic Party," said Chaulia, making reference to the leadership of Malaysian Prime Minister Muhyiddin Yassin, who rose to power in March in a political alliance with Perikatan Nasional.

"Naik is seen as an important religious preacher to the conservative Malay electorate – which comprises a large portion of the current Perikatan Nasional coalition's vote-base. Agreeing to extradite Naik risks eroding that base," explained Chye Shu Wen, an analyst at the London-based political consultancy Control Risks.

Loopholes in the extradition treaty might also allow Malaysian authorities to deny extradition. New Delhi-based lawyer Saurabh Chaudhary said Malaysia can ultimately refuse to extradite Naik on the ground that he may not receive a fair trial in India.

"Malaysia might contend that those fanning anti-minority sentiment in India are rarely prosecuted with the severity with which Naik is being pursued," he said.