Thousands German youths descended on the Baltic island of Rügen this weekend for the Prora03 festival. Despite the location's controversial past, organizers hope the event will raise the spirits of the depressed region. 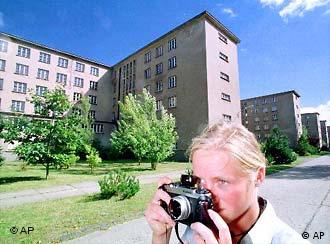 After many incarnations, part of the massive Prora complex is to become a youth hostel.

As politicians from the northeastern state of Mecklenburg-Western Pomerania considered ways of helping the youth in a region wracked by unemployment, they came up with the idea of staging a youth festival, a kind of awareness weekend along a beautiful stretch of the Baltic coast.

Successfully bringing together 15,000 young Germans with some of the country’s top politicians, Prora03 – the largest national youth event in Germany – aimed to paint a brighter future for the state, where many youths leave as soon as they can because there is little work to be had.

But the past also played a big role at the three-day festival, especially since it took place underneath the backdrop of one the most fascinating – if somewhat controversial – architectural sites the region has to offer. For Prora is a massive, yet never completed Nazi seaside holiday complex.

The location of Prora had event organizers divided for a while, with one camp arguing the impossibility of using such sullied terrain for youth purposes, and the other countering decisively that the very presence of new generations would drive out the demons of the past. The second camp won, and the festival took place this weekend with much music, entertainment and political discussion.

High-profile politicians, including Christian Democrats leader Angela Merkel came to the festival to speak to and with Germany's youngsters, and German President Johannes Rau called on those present to become politically active. He said that only those who get involved actually have the power to change things. They were select words given the location of the festival and the distance that Germany has come since Prora's shady beginnings.

Prora dates back to Nazi times. Shortly after Hitler and his National Socialists came to power in 1933, the trade unions were dissolved, and replaced with a newly-founded organization called the Deutsche Arbeitsfront (DAF), which was designed as a unified organization of the National Socialist community. The DAF was run by one of Hitler's confidants, Dr. Robert Ley, who set up a leisure-time organization called "Kraft durch Freude" (KdF) or Strength through Joy. The idea was to organize mass group holidays, to offer Germans a chance to recooperate at least once a year so as to maximize their health and keep happy under Nazi rule and fit for the coming war.

In the summer of 1938, Ley was quoted as saying, "Everything, but everything which we are doing with our Kraft durch Freude holidays, serves one single purpose; to give our people the strength to solve the burning issue of our inadequate landmass. We're not traveling about for fun, I deny that I created a travel organization. They should become sturdy so that when the Führer calls on them to solve this last issue, they will stand before him, 80 million-strong." 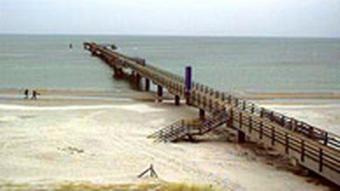 In 1935, the KdF organization announced huge-scale plans to built five seaside resorts along the German coastline. The first – and last – was earmarked for the island of Rügen. The idea came directly from the Führer, who was not thinking only in terms of the vacation delights of working Germans, but of the war he was planning. He ordered that the resort at Prora should be larger than anything of its sort, with 20,000 beds, which could, in the event of war, be used as a military hospital.

The architectural contract went to the Cologne architect, Clemens Klotz, who had already proved his worth in Nazi circles. His designs were presented at the 1937 World Exhibition in Paris, where they were awarded the Grand Prix. Eight resort buildings, each half a kilometer in length, were to dominate the beautiful coastline. And in amongst it all, there was to be a huge central 'festivities' house for all 20,000 'holiday-makers', a wave pool, a quay complex where cruise ships could dock, a power station, water works, a hospital and schools.

Work began on the massive construction project at the beginning of May 1936, and just short of two years later, the initial phase was complete. Nine construction companies were racing against each other, and with war looming, against the clock, to complete the eight accommodation blocks and the quay complex. The first of the blocks was completed towards the end of 1938, and although the shells were erected before the outbreak of war, 1939 put a rapid end to the ambitious building project.

With the Soviet occupation of eastern Germany in 1945, Prora's fate took an unexpected turn. The accommodation block shells became a temporary point of refuge for German citizens expelled from their homelands after the end of the war. In 1948 the southern most block was exploded by Soviet forces, and the building materials were taken away. Subsequent attempts to destroy two other housing blocks succeeded only in damaging them, and creating the ghostly ruins which still tower at the waterfront today.

With five of the original eight accommodation blocks still in a useable state, an architectural competition has been launched to transform block five into a youth hostel. Organizers of Prora03 hope the rebirth of the complex will also ignite the imagination of the Mecklenburg-Western Pomerania’s youth and convince them to stick around and help secure the region’s future while not forgetting the past.

Expulsion Not Just a German Issue

Plans to build a center in Berlin to remember Europeans expelled from their homelands in the 20th century have been shot down by the German government.

A planned reading from Hitler’s autobiography "Mein Kampf" has sparked much debate in the eastern German state of Mecklenburg-West Pomerania.

As the Nazi regime began losing the war in 1943, Hitler set about building a massive, top-secret building complex in Poland. Sixty years on, "Project Giant" is beginning to turn into a tourist attraction.