A young Holocaust victim has been brought back to life on the Internet. As a virtual figure, a young Jewish boy from Poland writes about his life during the Second World War - and he's looking for friends on Facebook. 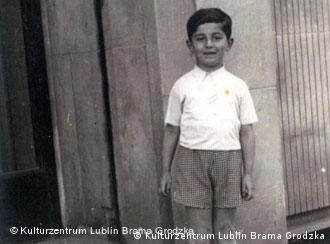 A young boy in shorts and a white T-shirt, with black hair, dark eyes, and a mischievous grin - that is how Henio looks to his friends on his Facebook page.

"My name is Henio Zytomirski. I am seven-years-old. I live on 3 Szewska Street in Lublin," he writes on his profile. His birthday is March 25, 1933. He is no more than seven or eight years old. As a young Jewish boy, he was killed by the Nazis in a concentration camp.

Henio has been signed up to Facebook since August 18, 2009. "On that day, I wrote my first entry," said Piotr Buzek. The 22-year-old works in the Brama Grodzka Cultural Center in Lublin, and he is responsible for bringing Henio back to life in the virtual world. He imagines how Henio felt during his life and writes as though he were him.

"Here at the center we have collected a lot of information about Henio's life, and then I tried to imagine how this young boy experienced the world around him," said Buzek.

So, on September 29, 2009, Henio wrote: "Winter has arrived. Every Jew must wear the Star of David with his last name. A lot has changed. German troops walk the streets. Mama says that I shouldn't be frightened, and always that everything is just fine. Always?"

By now, Henio has more than 1,700 friends on Facebook, and more are being added every day. Henio doesn't chat with them - he only writes short sentences about his life. His friends comment on what he writes - empathetically and honestly. They tell him what war means. And sometimes they can only explain to him that for many things in life there is simply no explanation.

An entry from Henio on October 5, 2009: "Grandpa says that the war will soon be over. He says that soldiers also have families. How is that possible? They have a family, but they kill families."

"I can't imagine such beastliness," Olga, one of his Facebook friends, comments.

"They have no heart," Irene, another friend, writes. 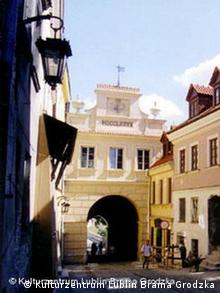 The cultural center in Lublin, Poland

The cultural center in Lublin has been reconstructing Jewish lives for eighteen years. More Jewish people once lived in Lublin - a city east of Warsaw - than Christians. Tomasz Pietrasiewicz, the head of the center, has made it his mission to remember the Holocaust.

"Henio's story has become the symbol of Jews in Lublin. He is a true icon. We have received an album with photos of Henio from a relative of his, one for every year of his life. The last one dates back to the year 1939, shortly before his first day of school. And then they stopped coming - there were no more pictures." 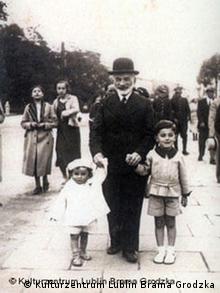 Henio, his grandfather and cousin in 1938

Family stories on the Internet

Henio's family story is available on the cultural center's website in Polish, English and Hebrew, and the album with photos of Henio has been digitized. The internet has long been a useful tool for the center. Memories of the Second World War are starting to diminish as the number of people who lived through that period grows smaller. However, the staff know that the history of the war and the Holocaust is best told through personal stories, and that is why they are trying to recreate them online.

"We wanted to use this new technology to help meet the goal of our center: to keep the memory of Jews in Lublin alive. We wanted an innovative way to share history. And with Henio's story, we wanted to reach out to a new audience," said Piotr Buzek.

This new audience - young people between 15 and 25 - are constantly online. Most of Henio's Facebook friends live in Poland, and therefore, Henio writes in Polish. But more and more, people from Israel are also signing up to be his friend. They translate Henio's entries into their own language, such as this one on October 11, 2009: "Today I have decided to never leave Lublin again. I want to stay here forever at my favorite place - with my Mama and Papa. In Lublin."

Henio's voice, Piotr Buzek, belongs to the Internet generation. Many of Henio's Facebook followers even have Internet access on their mobile phones, so they can constantly check to see if anyone has responded to Henio's entries.

"People write things on Henio's page that we don't speak about every day," says Buzek. "Maybe I'm naïve, but I have a good feeling that Henio's entries can make the world a slightly better place. They are making a contribution to ensure that something like the Holocaust never happens again."

Many cities throughout Germany have a sister city in Israel. But it hasn't been easy to find a willing partner for the German town of Dachau. (08.10.2009)