Yemen′s president agrees to step down on conditions | World| Breaking news and perspectives from around the globe | DW | 23.04.2011

Yemen's president agrees to step down on conditions

After more than three decades of rule, Yemeni President Ali Abdullah Saleh has accepted a plan that calls for him to resign from power within a month. In turn, Saleh will be immune from prosecution. 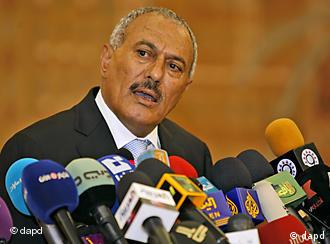 Yemen's President Ali Abdullah Saleh agreed to step down from power under the conditions of plan for political transition laid out by the Gulf Arab states.

According to the plan drafted by the Gulf Cooperation Council (GCC), Saleh will hand over power to his vice president within a month after an agreement is signed with the opposition. In return, he will be granted immunity from prosecution after leaving office.

"The ruling party informed the foreign ministers of the GCC of their acceptance of the Gulf initiative in full," Tariq Shami, the spokesman for Saleh's party, told the news agency Reuters.

Previously, Saleh had said he would leave power only when his presidential term expires in 2013, not through a "coup."

Saleh, who has ruled Yemen for 32 years, has claimed in the past that if he were to step down under the pressure of anti-government protests, Yemen would spiral into chaos and civil war.

"This would consequently harm the security of the region as a whole," Saleh said in a speech on state television.

"No for coups and no for stopping the development process, and yes for security, stability and peace," he added.

Western nations, particularly the United States, have been reluctant to publicly call on Saleh to step down. Saleh has received counterterrorism money from Washington to help fight Al-Qaeda in the Arabian Peninsula, which operates out of Yemen.

However, Washington began distancing itself from Saleh after his government carried out a violent crackdown on anti-government protesters, which left at least 100 people dead.

The Obama Administration recently declared its support for a swift political transition.

"We applaud the announcements by the Yemeni Government and the opposition that they have accepted the GCC-brokered agreement to resolve the political crisis in a peaceful and orderly manner," White House spokesman Jay Carney said in a statement.

"The United States supports a peaceful transfer of power in Yemen that is responsive to the aspirations of the Yemeni people."

An earlier statement from the US State Department had urged the process to begin swiftly.

"President Saleh has publicly expressed his willingness to engage in a peaceful transfer of power; the timing and form of this transition should be identified through dialogue and begin immediately," State Department spokesman Mark Toner said in a statement.

The US has condemned the heavy-handed response by Yemen's security forces to protests across the country. Military aid to Yemen could be cut, which in turn could have a serious impact on the fight against terror. (07.04.2011)