Shiite rebels said they handed over control of the key Red Sea port of Hodeida to local officials as part of a ceasefire deal with Yemen's Saudi-backed government. But pro-government forces have cast doubt on the claim. 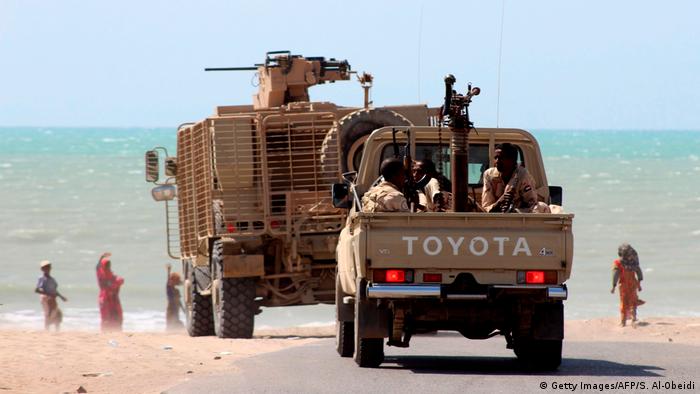 Shiite Houthi rebels have begun to withdraw from the key port in the Red Sea city of Hodeida as part of a deal reached in peace talks in Sweden earlier this month, a United Nations official said Saturday.

But the Yemeni government has disputed the withdrawal claim, calling it a ploy by the rebels to maintain control of the strategic area.

Military and local Hodeida officials loyal to the government have said the Houthis placed loyalist administrators and fighters in both the port management and the coast guard.

"It's a stage play in which the Houthis handed over the port to their fighters after they put on coast guard uniforms," said Hodeida Governor al-Hassan Taher.

Another pro-government official has called on the UN to put in place a "clear mechanism" to ensure a fair recruitment process at these facilities.

The Hodeida port handover was meant to be the first in a series of confidence-building measures between the Iran-aligned Shiite rebels and the Saudi-backed Sunni government, paving the way for a political settlement of Yemen's devastating four-year war.

The government and rebels also agreed in Sweden to exchange prisoners in a deal involving thousands captured on both sides.

The two sides have largely observed a ceasefire in Hodeida for more than a week, ending months of fierce fighting for control of the city.

A UN team, led by retired Dutch general Patrick Cammaert, arrived in the city last week to monitor the truce.

Houthi rebels control most of northern Yemen, including the capital, Sanaa, whereas their rivals govern much of the country's south, including the Arabian Sea port city of Aden, where the exiled government is located.

UN: 'We have reached an agreement on Hodeida'

The Middle Eastern country has been torn apart by a protracted civil war between the internationally recognized government of President Abed Rabbo Mansour Hadi and the Shiite Houthi rebels.

In support of the Hadi government, Riyadh launched an air campaign against the Houthis in March 2015. Saudi Arabia accuses Iran of backing the rebels, who have made significant territorial gains in the impoverished Middle Eastern country.

At least 10,000 people have been killed and more than 3 million people have been displaced since the start of the conflict. Around 80 percent of Yemen's population is in urgent need of aid, and millions of people have problems accessing water, according to the UN.

International pressure has mounted for the two sides to end the conflict. The United States has called for a ceasefire and reduced some of its logistical aid for the Saudi coalition, while Iran has also signaled support for the peace talks.