FIFA has opened a disciplinary case against Mexico after supporters used a homophobic chant during their team's 1-0 victory over Germany. The fans could have their "Fan ID" confiscated. 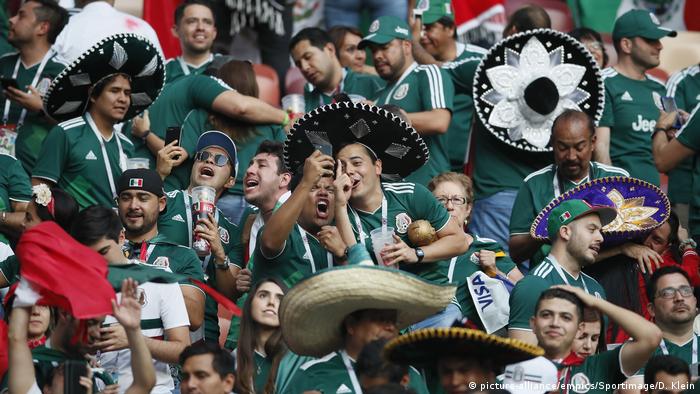 FIFA, football's governing body, announced on Monday that it has opened an investigation into homophobic chants from Mexico fans during their side's match against Germany.

Mexico topped Germany 1-0 in Moscow's on Sunday in a match with plenty of Mexican support.

An official anti-discrimination observer reported hearing shouts of "Puto" in the Luzhniki Stadium — a homophobic insult in Mexican Spanish aimed at opposition, usually at a goalkeeper when he takes goal kicks.

The Mexican football federation, Femexfut or FMF, has urged traveling fans to stop using the chant, saying: "Think about the fact that you are a representative of the best fans in the world."

If caught behaving badly, fans could face having their "Fan ID" confiscated — an official supporter document required to access matches and used instead of a Russian visa during the tournament.

"Prevent Russia from taking away your Fan ID or arresting you," FMF addded on Twitter.

Mexico's next game is against South Korea on Saturday.

Germany's loss to Mexico in their World Cup opener was no fluke. They were out-run, out-thought and out-fought by their opponents. The display poses Joachim Löw serious questions about some of his most trusted players. (18.06.2018)

Hirving Lozano shocked defending World Cup champions Germany when he put Mexico ahead in the 35th minute. The goal was so momentous it seemed to cause an artificial earthquake in Mexico City. (17.06.2018)