Petra was 50 years old when she quit her job in an office in Berlin to search for something she liked. She never got a chance to get back to work. Her father fell sick and she had to take care of him. Soon her mother needed constant care as well. Now it is her full-time job — one which she is not getting paid for. "I sleep even less now than I used to when I had a baby," says Petra. An alternative for her would be to send her parents to a nursing home, she says, but she loves her parents too much to do that.

"Few realize that taking care of someone is a hard work," says Christina Schallehn, a nurse who runs a free care course at Helios Klinikum in Berlin. "For professional nurses this work is over after an eight-hour day. But for relatives it is round-the-clock activity."

Courses like that are popular in Germany, where 70% of care for the elderly takes place at home, and is mostly done by women. Petra and other women dedicate one-and-a-half hours more time to cooking, cleaning and caring for children or elderly relatives than men. The 'gender care gap' in Germany is 52%. 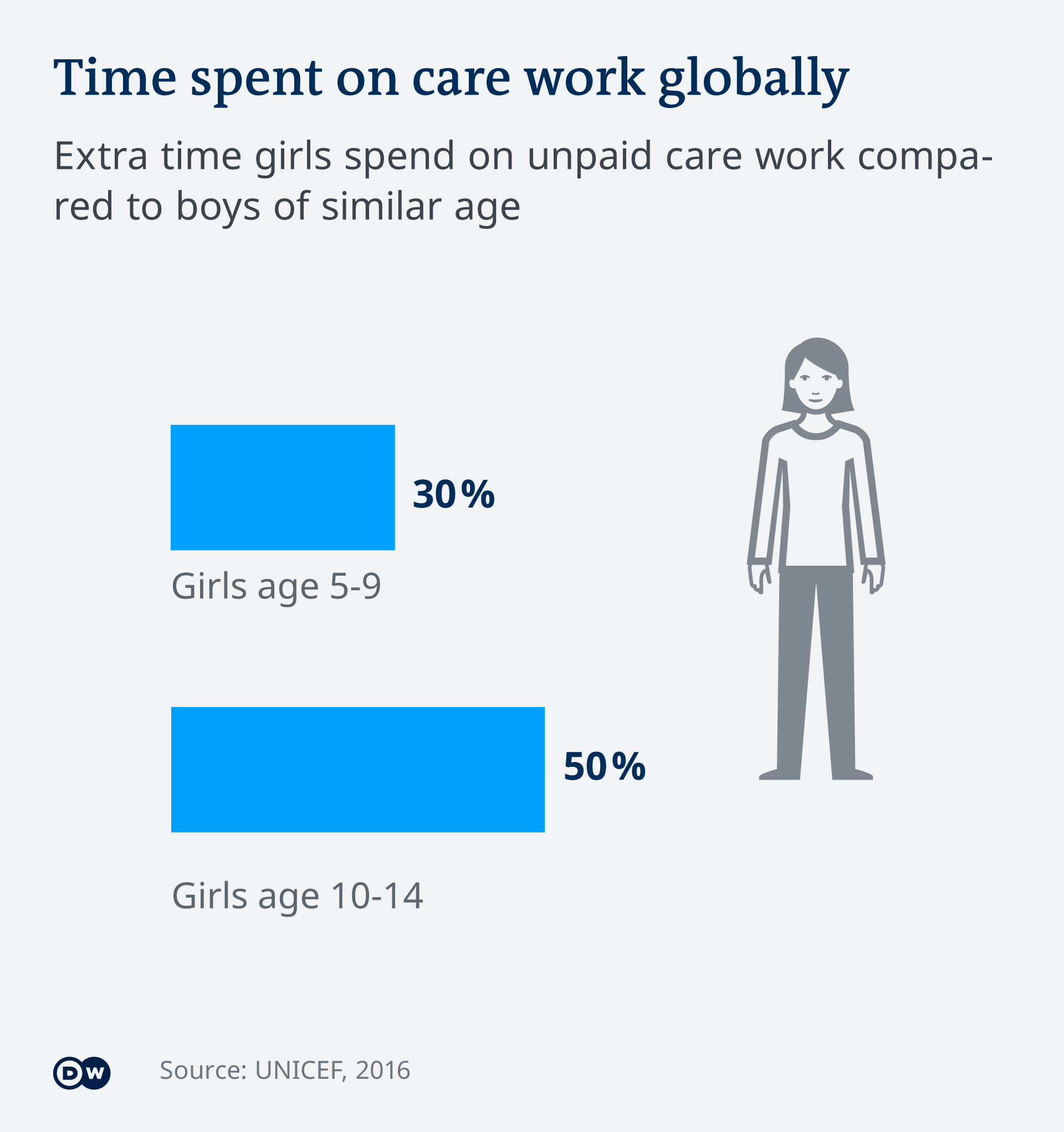 This means not only do women earn less every day or that they earn less over the course of their lives, but also that they get a smaller pension. Germany has the largest gender pension gap among OECD countries at 53%.

The most-affected women do not live in Germany, but in poorer countries in the Global South. There, women have less infrastructure, opportunities to afford domestic help and less technical labor-saving equipment. Women in low-income communities in Uganda, Zimbabwe, India, the Philippines and Kenya spend on average one year more during their lifetime on care work activities than women from better-off households. 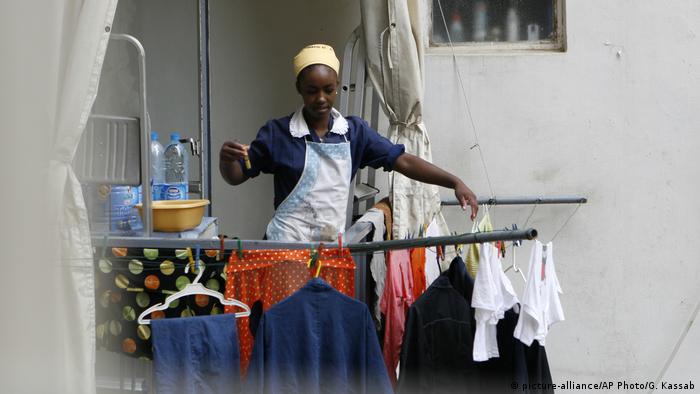 Every day women and girls around the world spend 12 million hours caring for children and elderly people, and doing domestic work. If that work were paid according to the minimum wage of the respective countries, the sum would be more than 11 trillion dollars a year.

These numbers are calculated by Oxfam and included in their yearly report that was presented on the annual World Economic Forum in Davos. They must illustrate how underestimated care work is, says Oxfam expert Ellen Ehmke. "We don't imply that these 11 trillion dollars should be paid to caregivers, but they have to receive material security for their work. That is what we as society have to recognize and finance."

"Good care work is [an] essential foundation for other economic activities; the whole economic system would not function without it and this foundation system is not economically valued," explains one of the authors of the report Jörn Kalinski.

The world economic system is sexist, say the authors of the report. Hours spent by women and girls around the globe for care work limit their access to education and the labor market. They earn less or no money and have fewer chances to become economically independent and accumulate wealth. 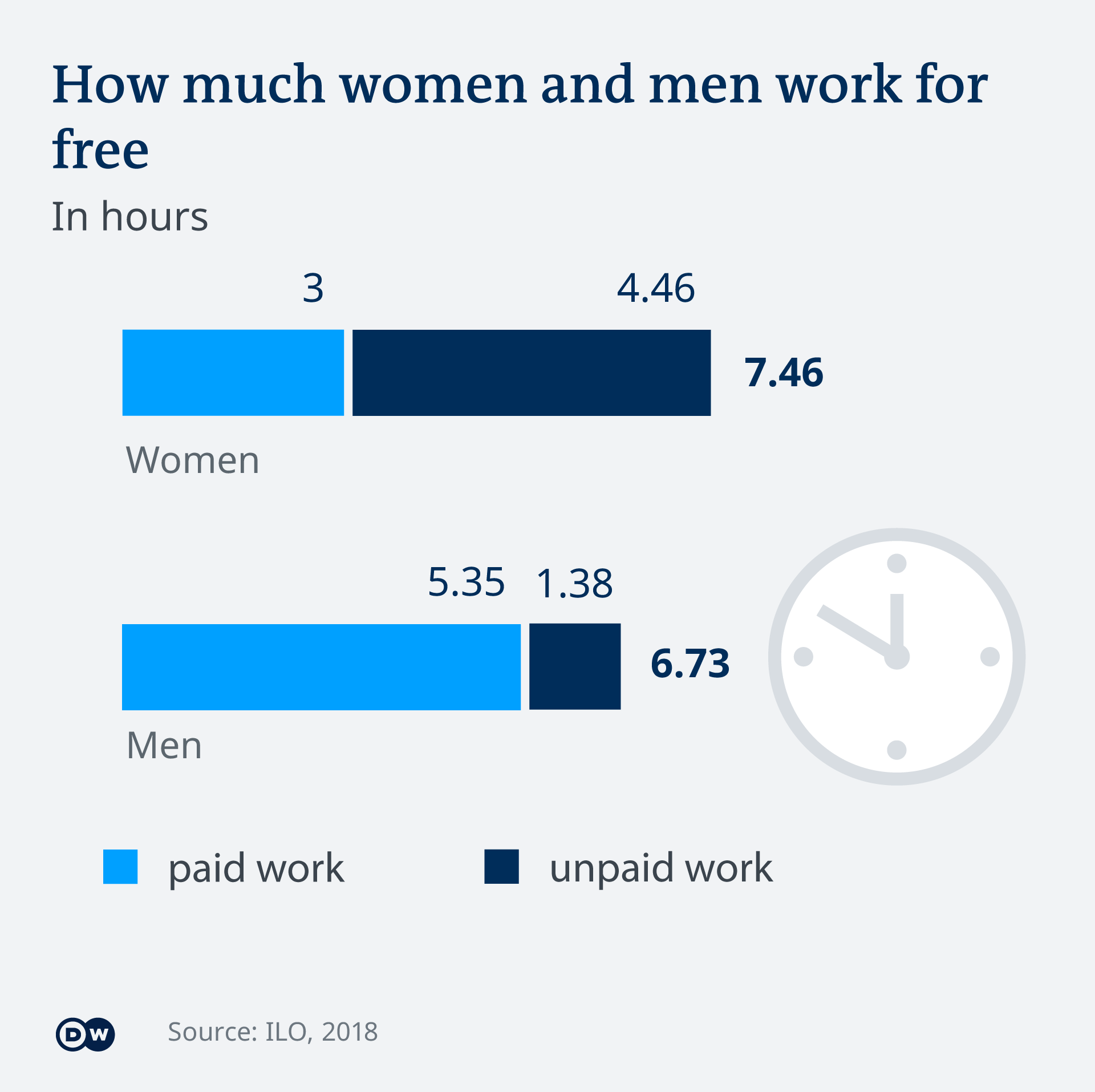 An 8-year-old girl spends 30% more time helping out at home than her twin brother. This percentage rises to 50% when she turns 10. This leads to a higher possibility of her staying at home and not getting a job at all. Globally, 42% of women working age are outside the labor market because of their unpaid care responsibilities — and only 6% of men.

Women around the world work too much, and their work is often unpaid, unrecognized and invisible, argues Oxfam.

In an ideal world, as described by Oxfam researchers, people would have a choice whether to cook, clean and take care of their relatives themselves, and would not face any disadvantages in the labor market for making this choice. For Petra, this may soon be an option. But for many women in other countries this is far from reality.

Equal Pay Day: Not much has changed