Davos: Wealth gap can be tackled by Fourth Social Revolution | Business | Economy and finance news from a German perspective | DW | 25.01.2019

At the World Economic Forum, a group of experts debated whether a reinvention of social systems is feasible alongside the Fourth Industrial Revolution. The panel discussion was aired on DW-TV on the weekend. 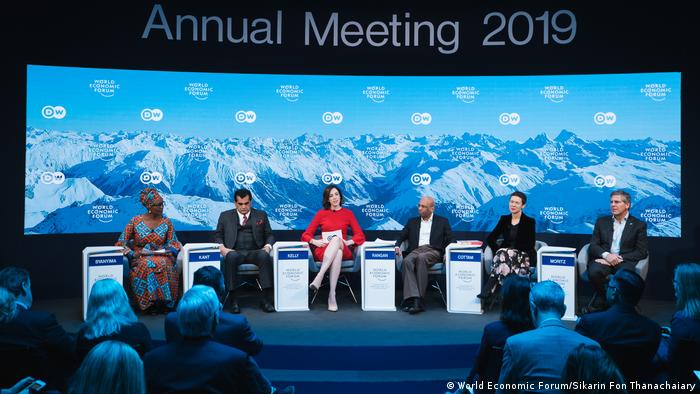 Heated debates over the past decade about rising global inequality have produced few workable solutions to tackle the issue, until now. In DW's discussion at the World Economic Forum in Davos on Friday, speakers from across the globe discussed how social systems could be reinvented alongside the Fourth Industrial Revolution to help close the wealth gap.

The scale of the problem was set out by Winnie Byanyima, executive director of Oxfam International, the charity that earlier this week released a controversial report on wealth inequality which stated that just 26 people own more than the poorest half of humanity.

"We're in a world where governments do not tax the rich enough, they allow them to dodge their fair share of taxes; and in the meantime, public services are crumbling ... in rich and poor countries alike," she told the audience.

Although none of the speakers supported the idea of a basic income for all, as a result of the enormous cost, they agreed that technology could be better harnessed to ensure welfare reached those who needed it.

"India used to be a highly inefficient country. Only 15 percent of resources meant for the poor used to reach them," said Amitabh Kant, chief executive officer of the National Institution for Transforming India.

"Every Indian today has a biometric [identity card], a mobile [phone] and a bank account," and those three technologies have allowed the Indian government to distribute public assistance that improves nutrition, education and health outcomes, and to ensure they reach those in need, he said.

Delegates heard how aggressive profit seeking and the increased political power of big business often leads to large-scale wealth extraction from communities, often without corporations putting back. Author and social entrepreneur Hilary Cottam warned that without a change in attitudes, the Fourth Industrial Revolution would keep misfiring.

"Without that [remaking of social systems] ... we can't make the transition to the new economy; we don't have a healthy, skilled workforce, we don't have consumers earning at a level that can demand the goods of the next revolution."

Governments and corporations at fault

Governments were blamed for introducing austerity policies, while multinationals were criticized for paying lip service to their social responsibilities, an issue that Robert E. Moritz, global chairman of the professional services group PWC International, said was beginning to change.

"The world is now their [the corporate world's] judge and jury. Artificial intelligence, social media and the like give the world a voice ... So, as they think about their brand, reputation, and sustainability, they've also got to be much more conscious of that voice."

The panel disagreed on the extent to which tax reforms, rather than technology and efficiencies, would be more helpful to address inequality and improve social systems.

In closing the session, Oxfam's Byanyiman restated her demand for a rewriting of the global tax rules that she said currently favored the wealthy.

"If we close those loopholes, developing countries can have $170 billion (€150 billion) that today leaves their borders and sits in tax havens."

A "Fourth Social Revolution?" panel discussion, hosted by Sarah Kelly, can be seen this weekend on DW-TV (English).

Only one in five participants at the World Economic Forum in Davos is a woman. Female role models are desperately needed to close the gender gap in politics and business. (23.01.2019)