Women and men marched together in Iraq in protest of powerful Shiite cleric Muqtada al-Sadr, who had decried gender mixing at anti-government sit-ins. He also used the US city of Chicago as an example of immorality. 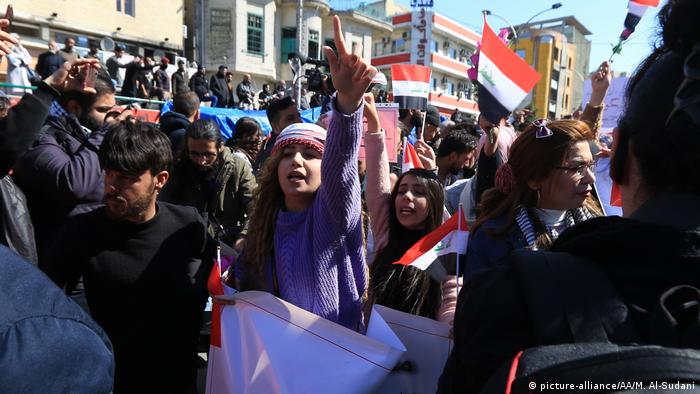 Hundreds of Iraqi women joined anti-government protests in Baghdad and other cities in southern Iraq on Thursday, chanting feminist slogans while men linked arms to form a protective ring around them.

"We will continue to defend our rights through demonstrations and participate in the decision to build a new Iraq after the demonstrations," she told AP.

Thursday's rally came in response to criticism by the cleric, politician, and former militant leader Muqtada al-Sadr, who last weekend slammed what he perceived as "immorality" at the months-long anti-government protests in Iraq. Al-Sadr initially supported the anti-corruption movement, but recently shifted his position after his preferred candidate for prime minister received establishment backing. He has since sent out conflicting messages to his supporters concerning the rallies.

On Saturday, al-Sadr said it was immoral for men and women to mix at sit-in protest areas and said protesters were using drugs and alcohol. Gender separation was also recommended in the 18-point code of conduct the cleric issued on Sunday.

On Thursday, ahead of the protests, he again slammed the protests as being rife with "nudity, promiscuity, drunkenness, immorality, debauchery ... and non-believers." He also said Iraq must not turn into the US city of Chicago, which he cited as an example of loose morals.

The statements posted on Twitter quickly became a subject of ridicule on social media.

The number of participants in the anti-government protests has been declining, partly due to the brutal government crackdown which saw over 500 people lose their lives. However, the protest has challenged taboos in the conservative Muslim country, with men and women holding hands or camping out together.

"We came out today against those who accuse Iraqi female demonstrators in Tahrir Square,'' 24-year-old protester Nada Hassan said. "We tell them that even if you kill or threaten us, we will continue to support the demonstrators."