Russian-German author Wladimir Kaminer recalls the Berlin years after the fall of the Wall, when people squatted houses and lived like there was no tomorrow. 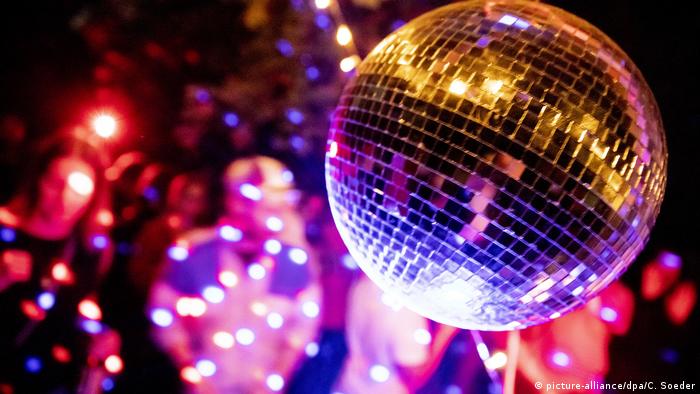 I'm doing well. Having been living and working in Berlin for 30 years, I define myself professionally as a German writer, but privately I have remained a Russian. That means I don't make an appointment beforehand when I want to visit my mother, I don't walk around the apartment in my street shoes and I don't look into the trash cans to see if my neighbors separate their garbage properly.

At home we only speak Russian. We sometimes even watch Russian news, even though we know that it should be enjoyed with caution. In any case, my home has always had very different news than the rest of the world. Despite this, I feel German, I am at home in both cultures. Germany and I have come a long way in these 30 years and have both changed a lot.

My favorite memories are from the beginning of the 1990s, a time of anarchy. 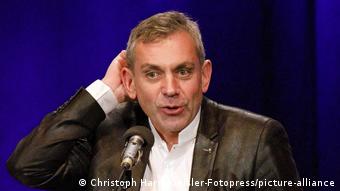 I came from Moscow to East Berlin in June 1990. Many houses were empty after their inhabitants left their apartments in a hurry. These people went to the West because they thought the Wall would probably be back soon. They thought the whole reunification was a misunderstanding and the Russians weren't paying attention and therefore didn't interfere — perhaps the tank drivers of the Soviet Army stationed in Germany had just run out of gas.

Maybe they had sold all their diesel to East German farmers. A friend of mine from the old days, a Soviet tank driver who had served near Neuruppin and applied for political asylum in Berlin after reunification, still likes to tell us today that the officers actually sold the fuel in large quantities to the East German population. They were insecure, didn't know what to expect at home after their departure from Germany and needed a nest egg for the dark times.

Even at that time, the Soviet Union was clearly heading in the direction of capitalism. The Cold War had settled, and it was unclear whether there would even be a place for Soviet officers in this murky future. So, they sold everything they no longer needed. They sold building materials, radiators, uniforms, fuel — they probably would have sold the tank if they could find a buyer for it. But the East Germans were so proud of their peaceful revolution that they didn't want any tanks, only gasoline.

My friend, the tank driver, later got political asylum, and started working for Telekom. "Germany is my home," he says. "Here all my dreams have come true." 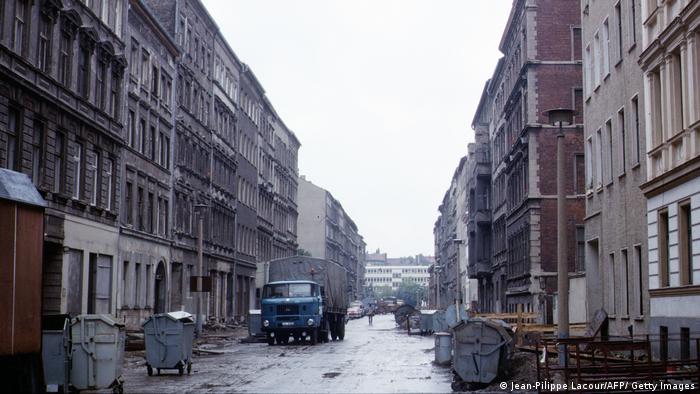 Enchanted by the air of freedom

Before I moved to Berlin, I imagined Germany as a well-ordered country, disciplined and clean, where people are never late for beer and the trams stop at every stop by themselves. If it gets too boring, I can always move to France or Italy, I thought.

But Berlin enchanted me with its anarchy. The city breathed the air of freedom, it smelled of marijuana and nitrogen, which was produced when coal briquettes were burned to heat apartments.

Even today when I drive through villages of Brandenburg at night, I can still smell these particularly strong-smelling coal briquettes, which Berliners used to steal from neglected basements and use for heating.

The reunited Berlin and I were both young and full of energy. The inhabitants of the occupied houses held parties in their backyards every week, you didn't need a permit from the health department to sell beer on the street. 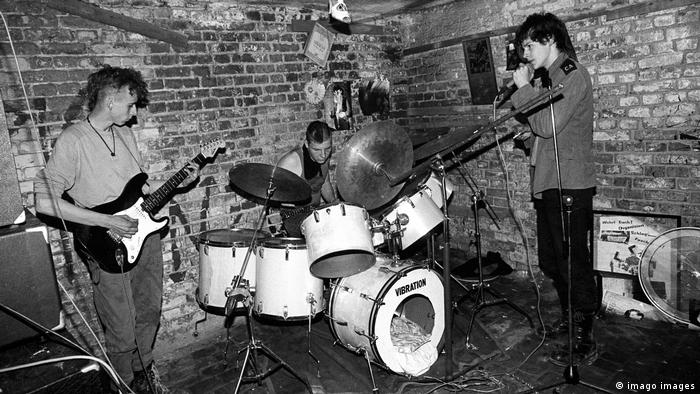 Parties were held in squatted houses, like this one in the Prenzlauer Berg neighborhood

It was easy to find a used car. The West Germans bought new cars because they could sell their used cars to the East Germans and make a profit. A car that didn’t change hands at least three times within a year was considered extremely uncool.

Non-Germans integrated themselves into the city quickly. The Vietnamese enthusiastically sold duty-free cigarettes under the bridges and opened the first Chinese restaurants. "Duck sweet and sour" and "green jasmine tea with plum brandy" were the big sellers.

For the East Germans, this was an introduction into the world of global gastronomy. In the past they were only allowed to eat duck at Christmas, but suddenly they had Christmas every day — and for the ridiculously cheap price of 9.90 Deutsche Marks! Malicious tongues, however, gossiped that many of these cheap ducks were actually just city pigeons.

The Africans from Angola and Mozambique opened dance bars where you could go to dance and drink. The Russians corrupted the housing companies; they bribed the officials and were able to buy huge apartments at ridiculous prices.

The department stores were filled daily with Western goods, the salesgirls could no longer remember the names of all the cheeses and jams, they simply said "Ham wa nischt" [we don't have that, in Berliner dialect] when people asked for things they didn't know. 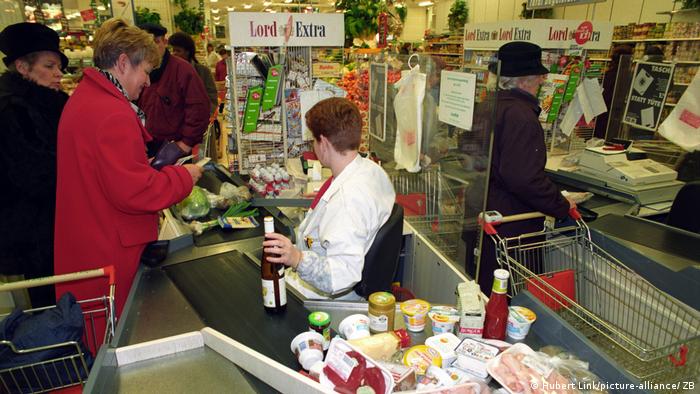 There were suddenly more goods in former East Berlin's supermarkets too

And the living was easy

The financing of the anarchic life was also well-secured. You had to go to the social welfare office once a month and without a long discussion you got 500 marks cash on the hand and sometimes a little extra for warm clothes and movie tickets.

The Russians, Africans and Vietnamese queued in front of the numerous telephone booths. Calling home was free, all you needed was a telephone fishing rod: The coin was attached to a fishing line with adhesive tape, and you had to pull it up carefully every time the phone "clicked" in order to get your free call.

The people on the phone had a lot to talk about, so the people waiting in line became impatient; they constantly called each other names. "Stop talking, go back to Angola," and "Give my regards to your uncle Ho." "Well, did Gorbi hang up?" they would ask us Russians.

The Germans watched this circus and rubbed their eyes in disbelief. Their cozy little world with its clearly marked entrance and exit dissolved like a phantom.

Bureaucracy did catch up in the end

It took quite a long time for the reunited Germany to pull itself together again and begin to restore order. Eventually, all the people who lived in the houses without proper papers were given proper rental contracts; the rent prices shot up immediately; the cigarettes were taken away from the Vietnamese and cleared through customs; the telephone booths were dismantled; and the origin of the ducks in the Chinese restaurants were checked. 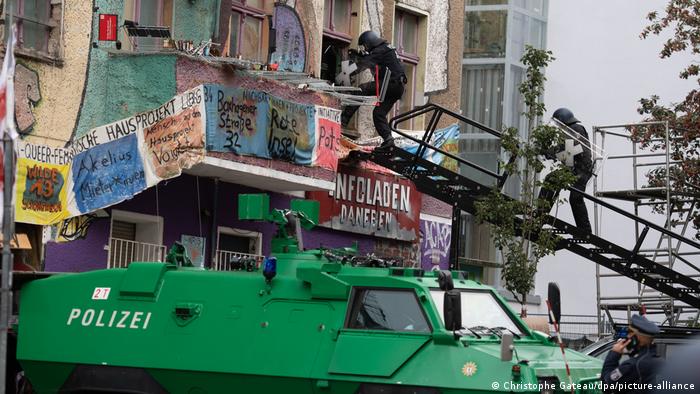 The 'Liebig 34,' one of the Berlin houses that had been squatted in the early 1990s, was evacuated in October 2020

The social welfare offices were transformed into job centers. You had to collect 30 signatures once every month from potential employers who demonstrably rejected you. This regulation destroyed many livelihoods and people had to develop new life plans. Many actually went to study or even work.

Some have remained stubborn and are still trying to push for the unconditional basic income.

Germany has found its way back to its famous order. Only recently, one the last houses that had been squatted in the 1990s was emptied. Only the memory of the times of anarchy remains.

Many compare Berlin in the '90s to New York in the '70s. The entire city was as a playground for art and night life. An exhibition recalls wild times in the exotic, unpredictable and productive capital.