It's often said that no one in Berlin is from Berlin. But among the city's shifting ethnic milieus, a well-established African community is building a strong Berlin identity, as DW's Stuart Braun discovers. 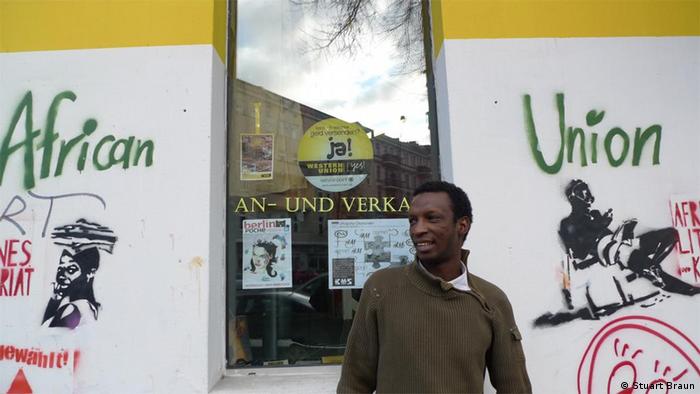 "I love Neukölln," says Saidu Bah, who runs the African Union bookstore and meeting place on the main drag of Berlin's polyglot southwest district. Saidu came to Germany from Sierra Leone in 1993 after fleeing civil war and opened African Union with his German wife almost five years ago.

I had noticed the store before, having often peered in at the array of African books, clothing and ornaments, but had never properly explored it - or the pan-African diaspora in Berlin it represented. After a couple of visits, I was struck by Saidu's enthusiasm for his adopted home.

"I think I belong to this area of the world, that's why I'm here, and I'm so grateful that my own part of the world becomes part of the German part of the world, particularly Berlin. We are here, ready to work with everyone," says Saidu, laughing as he walks around his store, which also hosts lectures, film screenings, theater performances and exhibitions of African writers, filmmakers and artists.

A few doors in either direction of African Union on Karl Marx Strasse are other "Afro stores" specializing in imported African groceries, hair products and cosmetics; both are run by Ghanaian women. Further along a street better known for its Turkish restaurants and hookah bars is the Evangelical church where the English-speaking Sierra Leonean community congregates on Sundays.

Though Turkish and Arab populations dominate among foreigner communities in the Neukölln district and across Berlin, Afrodeutsche (Afro-Germans) have a sizable if subtle presence. Some 70,000 to 80,000 people - or about two percent of Berlin's population - have an African background.

I had wondered if Berlin's Afro-Germans harked back to Germany's inglorious colonial forays into southwestern Africa. (The infamous 1904 massacre of the Herero population in what is now Namibia is well-documented). Indeed, in Berlin's working class, pan-ethnic Wedding district, streets with names like African, Cameroon, Togo or Congo recall the century-old Prussian conquests and ambitions on the continent.

But while some Africans took up residence in the country of their colonizer prior to World War I, and some students came for an education in the post-war years, most Afro-Germans made their homes in Teutonic lands after the 1970s and 80s. Some were refugees like Saidu, fleeing internecine conflict; others came of their own volition, economic migrants looking for opportunity. 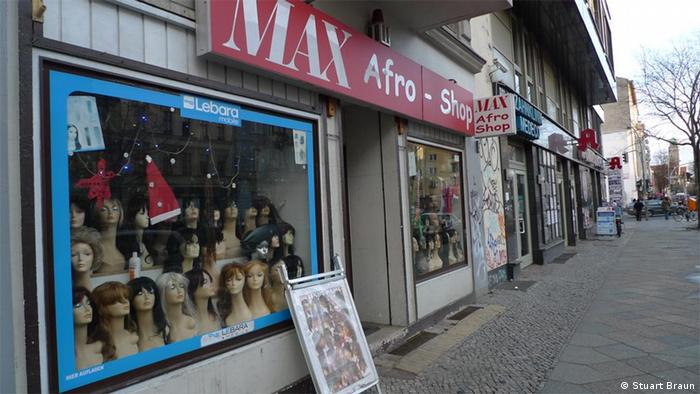 Max Afro Shop draws customers from all over

"The land you don't know, you think it's in heaven," says Rose from Ghana at the Max Afro Shop in Neukölln, while wrapping hair pieces for customers (not only from Africa). She admits that economic promise was the main lure for coming to Germany 20 years ago, but she stays in Berlin because she wants to, not because she has no other choice.

It's busy in the Max Afro shop and among the clientele is Charity, a 51-year-old Ghanaian who came to Berlin in 1985. Life in Berlin is a struggle, says Charity. She complains about the lack of work and systemic racism in German bureaucracies like the Job Center. Rose partly agrees, and says her oldest daughter, 20, was fired from her job in a café because of her skin color.

But Rose adds that Berlin has been good to her. "I love Berlin," she says. "We have an international city."

Around the corner at another Afro shop, the Ghanaian owner says she's been in Berlin for 17 years and has never been a victim of racism. "Ghana is my home but Berlin is also my home," she says, adding that she prefers to live in the more serene, middle-class Tempelhof area than the hubbub of Neukölln. Still, she's engaged in the community, and organizes the Ghanaian float in the Carnival of Cultures, Berlin's annual weekend-long multiculti extravaganza.

"Sometimes I miss Ghana. But if I go back, after three months I start to miss Berlin," she says.

"Berlin is very nice. Actually, I love it… It feels like home." Jalloh is browsing online for used German cars that he exports to West Africa. His office in Wedding is the corner of an African food store, the latter run by an older man who, like Jalloh, is from Sierre Leone. Packed tight with imported African fruits and condiments, the shop/office is a lively business and community space for Berlin's African diaspora. It's one of numerous spots of sub-Saharan color in Wedding, including the Guinean community center around the corner and the Maluma Dreams jazz bar run by a man from Togo.

Jalloh also came to Berlin in the mid-1990s, a time when the city was teeming with Africans fleeing war - they continue to arrive from trouble spots like Kenya. Many have stayed, especially since German immigration now more willingly gives residency status to long-term African economic or political refugees.

"Berlin is the best. It's the most multicultural city in Germany," Jalloh says, one eye on his computer. He adds that it's easy to do business in Germany if you follow the rules.

I ask Jalloh if he knows Saidu on the other side of town. Of course he does. Later, Saidu tells me that Jalloh's business is a great example of how Africans can facilitate German trade with a potentially huge, untapped market.

Saidu regards Berlin as a special place for African people worldwide. He says immigration procedures have become simpler, that police harassment is far less common, that Africans and Germans and the numerous minorities that make up Neukölln can do something special together. He also says he has never been insulted or attacked in Berlin, or anywhere in Germany, for his skin color.

As another foreigner in Berlin, Saidu's positivity is infectious. "We can be helpful for the German people themselves," he says. "It's better that we are here."

Germany presses on with deportations despite COVID pandemic 26.03.2021