Witnesses describe the brutality of the attacker, who killed six people and wounded dozens at the Russian university. University lecturers say students should not be left to deal with the trauma alone. 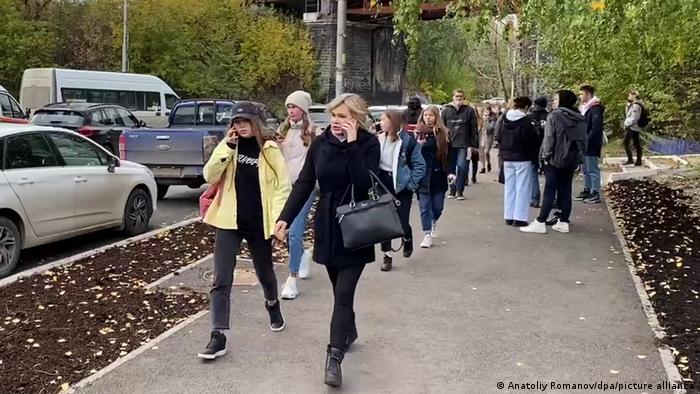 Alexei Trapesnikov was about to get in his car and leave Perm State University after a presentation on campus — but he wasn't able to. "The security guards at the entrance told me to turn back," Trapesnikov, a reporter with Rossiyskaya Gazeta, told DW.

"I saw a man covered in blood running towards the building. He appeared to have a shotgun wound in his abdomen. He fell. You could hear chaotic shooting."

When Trapesnikov returned to the campus on the advice of the guards, he began to film the unfolding events that Monday from the window of one of the buildings. However, he could not see the suspected shooter who went on a rampage at the university in Perm. After the suspect was arrested, the journalist began to form a picture of the carnage that the man had left behind.

Trapesnikov is calm, but clearly shocked. "I walked along the corridor and saw a body," he said. "An older woman, who was a member of the university staff, was screaming. It was a surreal, nightmarish image."

The reporter did not take footage of the bodies of the dead students. "There are moments that you just can't film," he said. According to the journalist, the perpetrator must have used "a very big caliber."

"The shotgun wounds were huge. You only shoot bears or elk like that. It leaves dreadful wounds on the body," added the journalist. 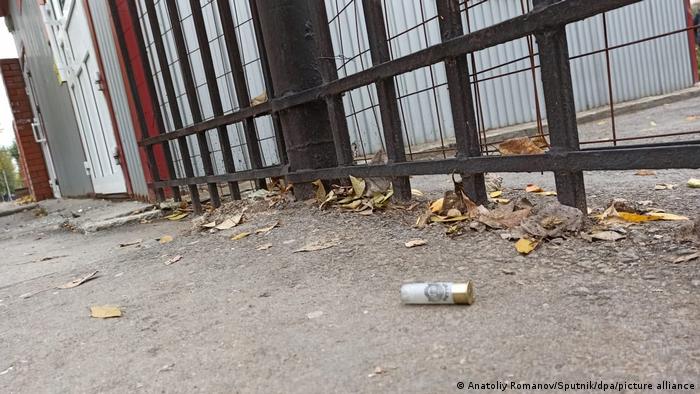 He also gained access to video footage in which the attacker first wounded a security guard and then pulled him into the building and "shot him in the head in front of everyone's eyes." People ran away and the gunman started to shoot everyone he encountered, says Trapesnikov.

"This was a very brutal attack," he stressed. The journalist said the two civilian guards did not stand a chance.

"There has never been a massacre like that here in Perm. Our city is pretty quiet," he said. There have been security exercises for this kind of event at the university, but no one ever thought that something like this could happen, he added. During the attack, a few people even thought that it was just another drill, says Trapesnikov.

The mass shooting in Perm was very similar to the deadly massacre in the Russian city of Kazan in which nine people were killed in a school gym in May this year, according to the journalist. "It is as if the perpetrators knew one another, or one had copied the other."

'At first, I thought it was a fire'

Ivan Petchichtchev, a lecturer at the Institute of Journalism at Perm State University, was on his way to his students that morning. His lecture was due to begin at 11:30 a.m., but he was running a little late. When he walked past Building 8, he suddenly saw students jumping out of windows on the second floor.

"You could hear screams and people panicking. Everyone was running away. At first, I thought there was a fire. But the students said it was gunfire. Shortly afterward, I heard the shots myself. It was terrible and we ran out of the building," said Petchichtchev. 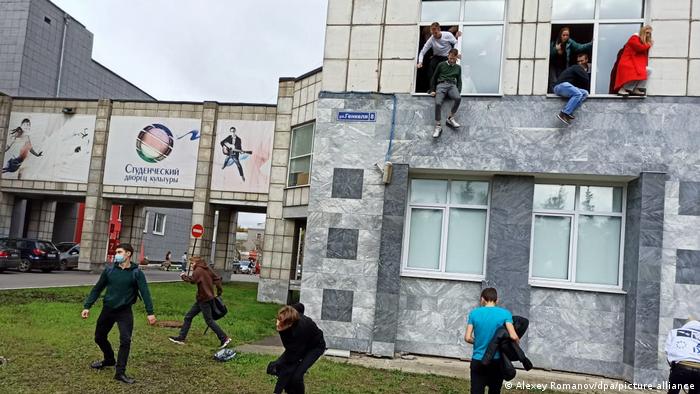 Students jumped out of windows to escape the massacre

His first thought went out to his students, who were in a different building. "I realized they were waiting for me because I was late. I thought that they might not know about what was happening and was worried — God forbid — that they might leave the building. So I tried to get to them as quickly as possible," said the lecturer.

After taking a circuitous route and sheltering behind parked cars, he finally arrived at Building 2 where his lecture was due to be held, only to discover that he could not get in. "Security had cordoned off all the entrances. Everything was closed. I only managed to get in with great difficulty after showing my employee ID," Petchichtchev said.

'Everyone was very scared'

By this time, however, his students had already found out what was happening via social media. Everyone was very scared, some were crying.

"We were stuck in a cordoned-off building and in a locked auditorium. We were told from time to time on the intercom system that we were not allowed to leave the room under any circumstances," said Petchichtchev.

After about 90 minutes, he said they got permission to leave the room. "We were led out of the building in an organized manner," according to the lecturer.

After that, everyone was sent home and classes were canceled. 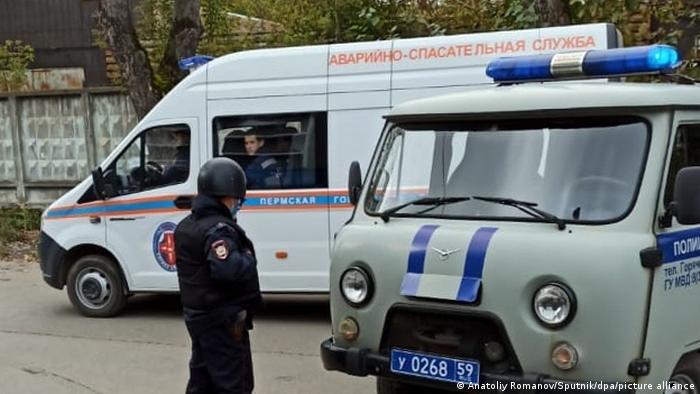 Six people were killed and dozens wounded in the barbaric attack

The city's inhabitants are shocked about the tragedy that unfolded at the university. "While I was walking home along the street, I met a neighbor, a colleague and a student. They all know that I work at the university and they asked me whether everything was okay. This is a shock for Perm," said the lecturer.

Ivan Petchichtchev is certain that many students will need psychological support after the massacre. "When I left the building, I bumped into colleagues from the chair of general psychology. I talked to them. They also think that the students will need professional help."

He does not think it is a good idea now to switch to distance learning. "That means the students will be left to deal on their own with their thoughts, with the stress that they have experienced," he said.

"I only saw students from my group and they were not affected, thank God! But others were in the midst of this nightmare. That is why many will need psychological help — and the university has staff capable of giving that."