With migrant deal under threat, EU ups diplomatic efforts | Europe| News and current affairs from around the continent | DW | 01.09.2016

Seven weeks after Turkey's failed coup attempt, and with its relationship with Turkey on rocky ground, the EU is pushing to keep its migrant deal with Ankara on track. Martin Kuebler reports from Brussels. 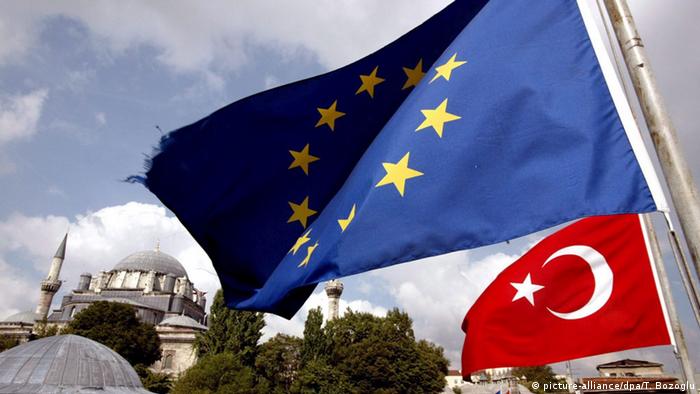 Relations between Turkey and the EU have been strained following the unsuccessful coup against Turkish President Recep Tayyip Erdogan nearly two months ago, and Ankara's subsequent crackdown on tens of thousands of people for their alleged support of US-based Muslim cleric Fethullah Gulen, accused by the Turkish government of masterminding the coup.

Despite messages of support from EU and other Western officials immediately following the coup attempt on July 15, which saw members of the armed forces try to overthrow the government, Ankara has accused the EU of indifference and threatened to pull out of its agreement with the bloc to stem the flow of migrants from the Middle East and Africa. 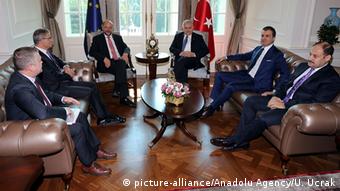 But with EU officials now back from their summer holidays, it seems the diplomatic push to keep the migrant deal from collapsing has kicked back into gear.

European Parliament President Martin Schulz traveled to Ankara on Thursday to meet with Erdogan, Prime Minister Binali Yildirim and other top officials, in one of the highest-ranking EU visits to the country since July 15. Schulz's visit coincided with that of EU Migration Commissioner Dimitris Avramopoulos, who met with Turkey's EU affairs minister Ömer Celik.

"My visit aims to pay tribute to all the Turkish citizens who courageously took to the streets to defend democracy in the country," Schulz said ahead of his trip. "I also aim to set the political dialogue on the right footing once again."

Thursday's high-level visits are "better late than never," said Sinan Ülgen, a visiting scholar at European foreign policy think tank Carnegie Europe. Speaking to DW from Ankara, he said Turkish officials have welcomed the visit but had expected the EU to react sooner.

Traveling along the Balkan route one year on

Last year, hundreds of thousands of refugees traveled north via the Balkan route. How are things now that the mass movement has subsided? Mariya Ilcheva retraces the trail through Greece, Bulgaria, Serbia and Hungary. (26.08.2016)

Turkey has repeated an ultimatum to the European Union: visa-free travel or else it will cease cooperation on migrants. The latest salvo was delivered by the foreign minister to Germany's mass-market "Bild" newspaper. (15.08.2016)

Despite its threats to the contrary, Turkey has a strong interest in complying with the EU's refugee deal. Brussels, however, should be more independent, writes DW editor Cristoph Hasselbach. (15.08.2016)

"It was a mistake to wait for more than a month after the coup attempt to travel to Turkey," said Amanda Paul, a senior policy analyst at the Brussels-based European Policy Centre (EPC). Paul, a Turkey expert, partly attributed the delay to the fact that EU officials may have misjudged the situation.

It's an assessment shared by Ülgen, who pointed out last week's trip to Turkey by US Vice President Joe Biden, along with continued criticism from Ankara, seems to have spurred the EU into action. Following Schulz's visit, EU foreign policy chief Federica Mogherini and EU Enlargement Commissioner Johannes Hahn are also set to travel to Turkey next week for talks with Celik.

"Now that we're at the beginning of September, the Brussels machinery is starting to come back to life after the holidays and there seems to be a surge of visitors to Turkey from the EU, but also from NATO, which is positive," said Paul.

"And we've also heard some quite positive narrative coming out of Brussels," she added, referring to recent comments by EU parliamentarians on how the European Union might have "underestimated" the gravity of the failed coup.

"After my visit, I take a different view on some of the Gulen-related issues," Brok (pictured above, center) added. "The movement has infiltrated the state, they have acted as a 'brotherhood'. There has been a misappraisal of the Gulen movement on our side."

Brok also said the EU had to take a "constructive approach" toward talks surrounding the migrant deal with Turkey, along with EU membership discussions and visa-free travel for Turkish citizens. Ankara has threatened to suspend the migrant deal, agreed with the EU in March, should the EU fail to lift the travel restrictions by October.

"My impression was that Turkey intends to stand by the refugee agreement," said Brok. "However much Turkey merits our criticisms ... from our geostrategic point of view, it's more important for Turkey to be on our side than in some else's camp."

After Thursday's talks with Commissioner Avramopoulos, Turkey's EU affairs minister stressed Turkey was committed to the March agreement, but reiterated that the lack of a deal on the visa liberalization issue by next month could put the migrant deal in jeopardy.

Paul told DW that the migrant deal between the EU and Ankara "remains a top priority in the EU, far more than anything else."

"The main element of [Thursday's] visit is to try and repair some of the damage of the last few weeks, and to keep the migrant deal on track," she said. "There was a need to go and build some bridges, to say the right things, to not go there and just focus on human rights issues."

One of the sticking points in the visa talks has been Turkey's strict anti-terrorism laws, which the EU has said must be eased before any agreement can be made. But after meeting with the European Parliament president on Thursday, the Turkish prime minister made it clear that Ankara would make no change to the laws, further putting the migrant deal into question.

Despite the rhetoric from Turkish officials threatening to pull the plug on the deal, Ülgen doesn't believe Ankara intends to completely dump the agreement, should visa liberalization talks not succeed by October.

Instead, he said Turkey may decide to only honor parts of the deal, refusing, for example, to take back refugees from the EU but still maintain their patrols in the Aegean Sea.

Paul pointed out that maintaining the migrant deal was in Turkey's best interest.

"It's not just a win situation for the EU, which is sometimes how Turkey tends to portray it," she said. "It's also a good deal for Turkey in many respects, and it keeps a dialogue going between the two.

"The EU needs to do its best to engage in a dialogue in every possible area, in every possible way if we want to progress this relationship, or have any chance of getting back onto a democratic road," she said. "That is not going to happen if we just leave Ankara to its own devices, particularly at the moment when its actually very unclear where this country is heading."