With Honduras in crisis, calls grow for president to resign | Americas | North and South American news impacting on Europe | DW | 24.06.2019

With Honduras in crisis, calls grow for president to resign

Thousands of Hondurans are taking to the streets, calling for President Juan Orlando Hernandez to step down. They are tired of his authoritarian tendencies and austerity measures, and widespread corruption. 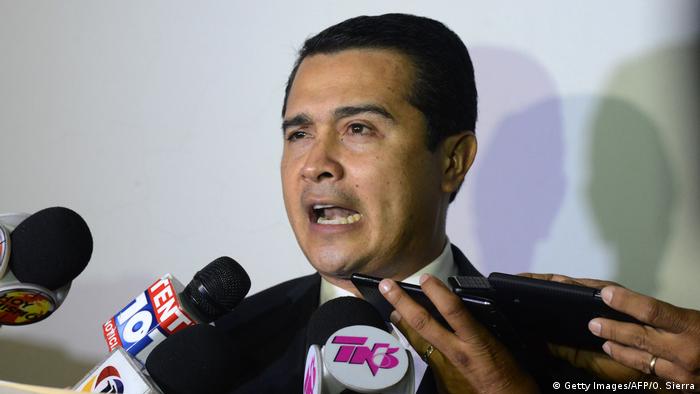 The crisis began with two decrees issued by President Juan Orlando Hernandez in April, giving the Honduran education and health ministers free rein to implement austerity measures. Since then, the country has been in turmoil, with a wave of protests putting the president under growing pressure. Analysts doubt the country will stabilize anytime soon. Juan Ramon Martinez, a commentator for the daily La Tribuna, recently wrote that there is "no light at the end of the tunnel." For weeks, teachers and doctors have expressed their dismay at the government's planned cuts in the education and health care sectors.

Gerardo Martinez, of the Association for Freedom and Democracy, says Hernandez' authoritarian and self-righteous style of governing is a problem. He has accused Hernandez of ruthlessly pushing though his plans and breaching the law and the principles of democracy.

In a forthright letter published in early June, the Honduran Bishops' Conference sided with the protesters, declaring that "if every conflict is managed this poorly, Honduras will find itself amid a severe crisis."

Read more: Caught between floods and drought ― farmers in Nicaragua living in uncertainty 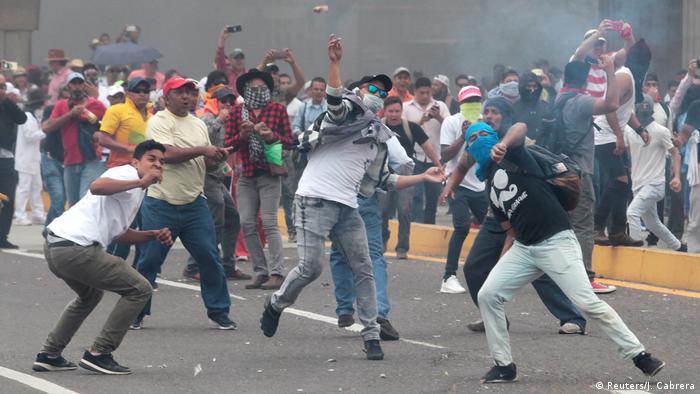 Honduras has seen weeks of protests against the Hernandez government

Educators and health care workers say the controversial presidential decrees amount to an express permission to drastically cut expenditures, privatize their respective industries and fire individuals for holding certain political views. Soon after taking to streets, they were joined by disgruntled farmers, and taxi and truck drivers. And most recently, the Honduran police joined the protests, too, demanding the state provide uniforms, pay for petrol and grant them holidays - things to which they are officially entitled.

After footage of riots, barricaded streets, masked police officers and firebombs outside the US Embassy went around the word, Hernandez caved in. He withdrew his decrees and offered to engage in dialogue with the protesters. Calls for him to step down, however, have been growing louder. And even his own party and his predecessor, former President Porfirio Lobo, have urged him to resign.

The root cause of the present crisis, meanwhile, can be traced back several years. In 2009, popular left-wing president Manuel Zelaya was ousted by an alliance of businesses, the military and lawmakers from the National Party of Honduras (PNH). Ever since, Zelaya has been out to exact revenge for the coup. Conservatives in Honduras, meanwhile, regard Zelaya as a communist, and have been determined to prevent his return to power.

"It's a dichotomy the country has been stuck in since then like a swamp," said Gerardo Martinez. In 2017, for example, Hernandez was reelected after scrapping the constitutional ban on running for a second term — reportedly with the assistance of bribed parliamentarians. And observers have pointed out vote counting irregularities during the election itself. 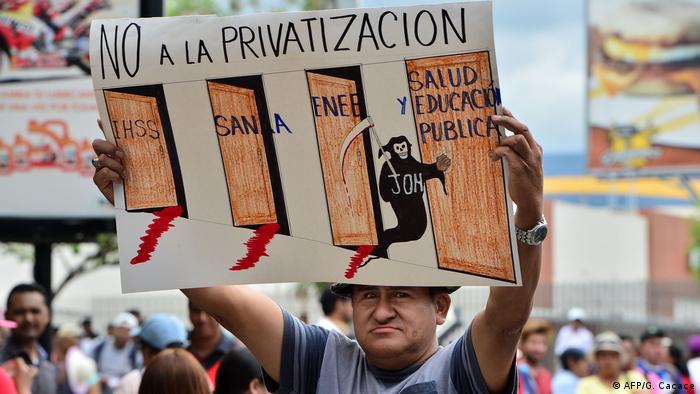 Protesters are tired of the Hernandez administration's neoliberal policies

Juan Ramon Martinez says that Hernandez depends on the country's military and the United States government to maintain his grip on power. Indeed, on Friday the president welcomed US marines at Palmerola Air Base near the Honduran capital, Tegucigalpa. They will help fight the country's youth gangs and drug cartels. Surrounded by top military brass, Hernandez also announced that the country's security forces will be deployed across Honduras to combat vandalism and to clear road blocks.

Journalist Noe Leyva, meanwhile, does not believe Hernandez will step down any time soon, saying that "no change is in sight as long as he has the backing of the US and the army." Hernandez is a loyal US ally ― even though his own brother is on trial in the US for drug smuggling. Hernandez is giving US forces free rein in Honduras, and has not objected to the harsh treatment of Honduran migrants at the hands of the American border personnel.

The US welcomes Hernandez' neoliberal, free-market policies and sees him as a capable leader. Since he took power, the Honduran economy has grown by an average 3.5% each year. Hernandez has reduced the national debt-to-GDP ratio from 7.9% to just 1.2%. And thanks to substantial investments in the security sector, the country's murder rate has almost halved over the past six years, falling from 87 per 100,000 residents in 2011 to 44 in 2017.

But ordinary Hondurans are barely benefiting from the economic upswing. Half of the population is without a regular job, and roughly 60% live below the poverty line. Street vendors tell DW that electricity and transport costs are high, and that youth gangs extort money from them. Corruption and impunity are rampant, which undermines the country's institutions. According to the Latin American Geopolitics Strategy Research Institute, or CELAG, the country's economy simultaneously produces growth and impoverishment.

The Honduran Bishops' Conference believes the county is at a crossroads. In its unusually frank letter, the organization criticizes that the "constitution is amended arbitrarily, the country's institutions are not independent, Congress is sham parliament, and lawmakers are turning their backs on the people. Enough is enough."

Honduras: Land of gangs and violence

Criminal gangs pose an existential threat to state and society in Honduras. For many, the only option is to flee. (03.01.2019)