Will the Taliban restrict internet access in Afghanistan? | Asia | An in-depth look at news from across the continent | DW | 30.08.2021

The Taliban say that they want to ensure internet access in Afghanistan, but they could face substantial technical and financial challenges to keep it running. Afghans say they fear more surveillance and censorship. 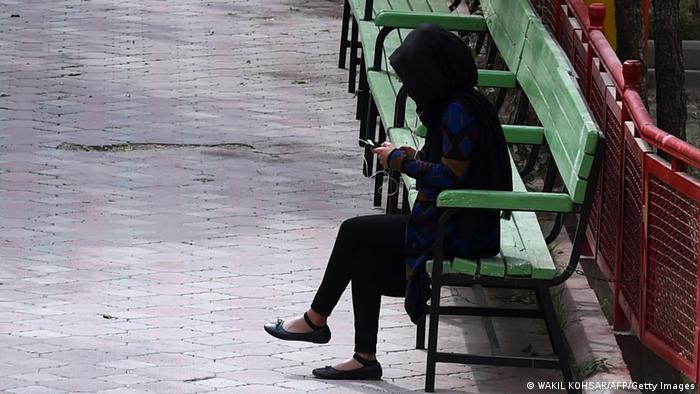 The World Bank estimates 13.5% of Afghans currently have access to the internet

"The Taliban have started to turn the internet off and on in some parts of Kabul," said Habib Khan Totakhil, an Afghan journalist and founder of the Afghan Peace Initiative.

After the Taliban takeover of Afghanistan, losing internet access has become a  major worry for Afghans, especially among the middle class.

"There is concern among journalists and activists that once the Taliban consolidates power, they will turn off internet connectivity," Totakhil told DW.

Citing local sources, BBC journalist Yalda Hakim tweeted on Sunday that internet and telecom services were disrupted by the Taliban in Panjshir province.

However, except for a small dip in the few days before and after the Taliban swept into Kabul, overall internet traffic in Afghanistan appears to have remained steady.

Since the internet was introduced to Afghanistan nearly 20 years ago, the World Bank estimates that 13.5% of Afghans currently have access.

Most users live in urban centers and are connected by an infrastructure built largely with foreign aid from the US and the World Bank and investment from foreign companies.

Many Taliban officials seem to be embracing the internet by joining Twitter and opening communication channels on WhatsApp. A few high-level officials have been photographed wearing Apple Watches.

A report by the Atlantic Council last week said that the Taliban weaponized social media during their campaign to take over Afghanistan. Other observers labeled the resurgence of the militant group as "Taliban 2.0."

But for many, it was a shock that a group known for banning televisions and radios in the late 1990s was now not only allowing Afghans to access technology but also utilizing it themselves.

Kabir Taneja, a fellow with the Strategic Studies program at the Observer Research Foundation in New Delhi, sees the Taliban's internet strategy as part of a broader approach to revamp the group's image in the eyes of the Afghan people and the international community.

"The Taliban is still known for blowing up the Bamiyan Buddha statues, for public floggings," Taneja told DW.

"The task of changing their image is really massive, so banning something like the internet would just add to that problem," he added.

Can the Taliban keep the internet running?

Taneja believes that the Taliban's military success in retaking the country and their online media campaign does not mean they will be able to keep service up and running for Afghanistan's millions of internet users.

Last week, the Taliban met with officials from the Afghanistan Telecom Regulatory Authority (ATRA), and said they would be working together to ensure that internet access remains active.

This comes only a few months after ATRA reported that the Taliban had destroyed 28 telecommunication towers around the country.

Two of the largest providers of mobile communications in Afghanistan are Etisalat based in the United Arab Emirates (UAE) and South Africa's MTN Group. MTN announced last year that it would be leaving the Afghan market. Etisalat has not made any public comments on whether or not they will halt operations.

"Right now it seems like the internet in Afghanistan is running on autopilot," said Doug Madory, the director of internet analysis at Kentik, a company that monitors global networks.

"It will be a few weeks before we will see if the Taliban have the capacity to keep the internet running, whether they have the manpower and the equipment to fix any internet outages or even just to keep the power on," he told DW.

Afghanistan is connected to the rest of the internet through a series of fiberoptic cables that run north through Tajikistan, east through Pakistan and west through Iran.

The Taliban will have to keep paying for the broadband the country sends through the cables. With their assets in the US frozen, and foreign aid halted, it is unclear whether they will have the resources to keep the information flowing.

"The companies that are providing international bandwidth to Afghanistan, they are charging by the volume of traffic," said Madory. " And when the bill comes, if they don't pay it, then they're going to cut them off."

Can the Taliban monitor online activity?

Afghans are also concerned that the militant group will begin monitoring content and traffic.

SensorTower, a site that tracks the top downloads from the Google Play store (the majority of people in Afghanistan use Android phones), shows internet security apps like virtual private networks (VPNs) and secure messaging apps like Telegram are gaining users.

"A lot of people are changing their handsets as well as their contact numbers," said journalist Totakhil.

"Many are also switching to using [the encrypted messaging app] Signal because they believe that WhatsApp is compromised."

Facebook, which owns WhatsApp, has taken steps to block the Taliban from using the service, for example, by shutting down a complaints line that the group had set up.

The company also joined Twitter and LinkedIn in making changes to their social media platforms in Afghanistan so that users' digital histories and social connections are better protected.

Analysts Madory and Taneja believe the Taliban have the technology in place to shut down the country's internet and block certain websites and services to halt opposition to their power. But both noted that it would be difficult for the Taliban to set up an online censorship system based on the ideologies of Sharia law.

"I'm guessing they don't have the high level of sophistication that it would take to implement something like the 'great firewall' in China," said Madory.

The Taliban have continued to insist that certain rights to free expression and women's rights will be respected.

But local media has reported that in the southern city of Kandahar over the weekend, the Taliban banned music and women's voices from being played over the radio.

Taneja believes that the internet will also soon be subject to similar bans that will start in the provinces before moving to Kabul.

"Let's not forget," said Taneja. "This is the Taliban."

Germany's military ended efforts to rescue people from Afghanistan, and many German groups' Afghan staff members have been left behind. It's a betrayal that has caused irreparable damage, writes DW's Maissun Melhem.

Afghan students in India stuck in limbo after Taliban takeover

Students from Afghanistan living in India face a difficult choice: go back home to Taliban rule or stay abroad and leave their families behind. And with their funds drying up, many are struggling to make ends meet.