Will the EU-China summit lure Beijing toward the West? | Europe | News and current affairs from around the continent | DW | 31.03.2022

Will the EU-China summit lure Beijing toward the West?

Brussels is seeking to warn Beijing about supporting Russia's invasion of Ukraine — and to use its influence to stop the war. Some experts, however, are skeptical about what can be achieved during the EU-China summit. 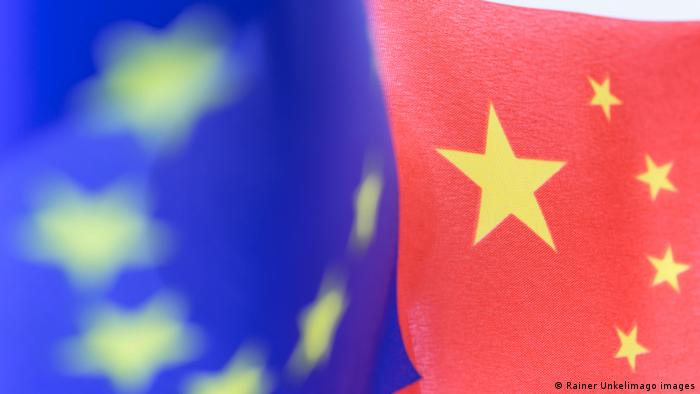 Russia's war in Ukraine and China's obfuscation over the Kremlin's actions have signaled the possibility of further contention between the European Union and Beijing when the two sides meet at a virtual summit on Friday.

While China has expressed concern about the escalating war in Ukraine, differences over the war's root causes prevail: China supports the Kremlin's anti-NATO narrative, while the EU and the West stand opposite.

Yet, Chinese President Xi Jinping previously pointed out that his country stands for peace and opposes war, according to a government readout in March. 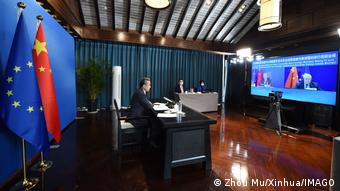 Leaders in the EU are keen to use the upcoming summit with China to discuss the war in Ukraine, including Finland's Prime Minister Sanna Marin who said ahead of the talks, "We have to make sure that China is on the right side of history."

The European Council in a statement said EU nations are also keen to resume the human rights dialogue with China in a substantial way and to discuss other areas of shared interests like tackling climate change and the ongoing COVID-19 pandemic.

Andrew Small, an expert on China at the German Marshall Fund of the US in Berlin, explains that EU leaders will look at this meeting as a sort of "warning summit'' directed toward China.

"Over the past few weeks, we've seen a lot of statements from European leaders expressing their concern about China's budding relationship with Russia," he told DW.

"Regardless, EU leaders are increasingly aware of the need to bring about long-term rebalancing in its relations with China, as the Russian invasion has made EU nations realize the risks of dependence on authoritarian states that make military threats to their neighbors," he added.

But Amanda Hsiao, a senior analyst on China at the International Crisis Group, told DW, "What China would prefer after its summit with Europe is that EU leaders understand its position on the Ukraine crisis and not let it affect future EU-China relations."

"For China, the language that comes out of the summit would ideally reference China and the EU collaboration on humanitarian aid efforts in Ukraine and the promotion of dialogue. A scenario of  EU-China alignment on condemning Russia's actions is not forthcoming,” she added.

The relationship between the EU and China has soured ever since the EU criticized Beijing's trade practices and accused China of human rights abuses against the Uyghur people in the country. Beijing's trade block against Lithuania and sanctions against EU lawmakers last year, further heated up the geopolitical tension.

But German politician Reinhard Bütikofer, who also serves as the leader of the European Parliament's China delegation, doesn't see the EU and China solving these issues in the upcoming summit.

"I expect Europe to talk in a straightforward manner and clearly address all its issues with China, including the oppression of the freedom of the Hongkongers against China's international obligations, and China's behavior towards Taiwan. But I don't expect a withdrawal of the sanctions as a part of the outcome of the summit," he told DW.

Bütikofer is among the five EU lawmakers blacklisted by China last year, a retaliatory move over the EU's accusations of human rights abuses.

"In all the conversations that have been had since those sanctions were imposed, the Chinese have refused to acknowledge that the ball is in their court. We have been very clear that there is no chance of considering ratification of the Comprehensive Agreement on investment as long as the sanctions are in place. But I'm afraid the Chinese leadership is not able to concede," Bütikofer added.

According to Joris Teer, a China analyst at the Hague Centre for Strategic Studies (HCSS), China's pro-Russian neutrality signals new challenges for the EU.

"China has a very important export market in the EU that it wants to continue to make use of. The summit will show us how China intends to perform this balancing act, including how it will try to separate the EU from the US," he said.

Will the summit make China lean towards the West?

While EU and NATO leaders have warned Beijing that it could face consequences from the West if it continues to side with Moscow, Teer explained that China is focusing its efforts on what it sees as its worst threats — including the US.

"In 2022, China clearly sees the US as the principal enemy. The US hurts China's key interests, as consecutive US Presidents have said that liberal democracy is the only legitimate government system. This makes the EU's hopes of China making a meaningful turn towards the West, unfounded," he said. 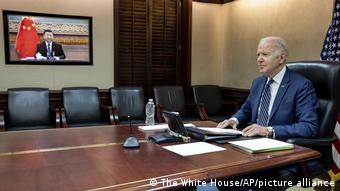 US President Joe Biden holds a virtual meeting with China’s Xi Jinping to discuss the war in Ukraine.

"Currently, Russia supports China in achieving its key interests which include, preserving the supremacy of the communist party, safeguarding territorial integrity and helping economic and societal growth. Russia also supplies China with relatively cheap energy resources -for a large part over land- where the still superior American navy cannot cut off supplies during a crisis," he added.

China expert Andrew Small adds that Beijing is keen to engage in normal diplomacy and is aware of Europe's strategic importance. But the Chinese government, he added, wants Europe to embrace strategic autonomy. "This is their definition of not cooperating with the US," he said.

For EU lawmaker Bütikofer, who remains blacklisted by Beijing, he hopes relations will improve in the future.

"I've been interested in China since 1970 and I really love the country and I love the culture and I have so many friends there that I cannot visit, that I cannot even call because it might endanger them if I do. But, I take the long-term view," he said.