Will Thailand′s military step aside after elections? | Asia | An in-depth look at news from across the continent | DW | 19.12.2018

Will Thailand's military step aside after elections?

Although the current military junta has announced a date for elections, protesters say they have heard this all before. Democracy activists say the country could sink into crisis if elections are postponed. 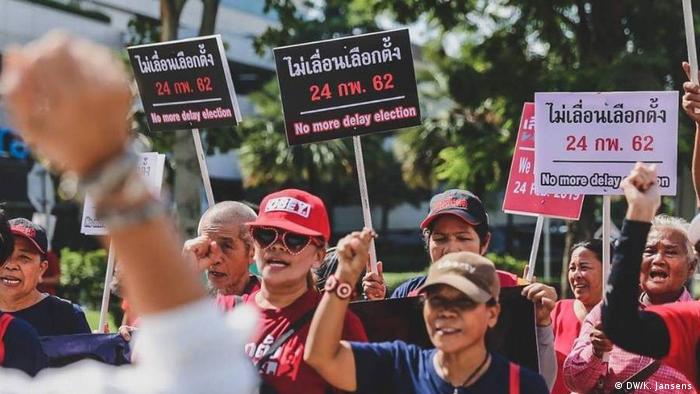 For four years, Thailand has been governed by a military junta and its opponents have been continuously demanding new civil leadership. This might happen next year, as the military last week confirmed February 24 as an official date for national elections. However, many Thais have their doubts about the fairness of this ballot, and there is much discontent.

Pattaya is a well-known Thai coastal town, about 150 kilometers (90 miles) south of the capital Bangkok. Tourists lie on the beach or sip cocktails in the numerous bars as a noisy parade passes by.

Demonstrators are shouting and playing music. Observers encourage them by raising a thumb or taking pictures. But rather than just making a scene, these red-shirted protesters are actually speaking out for democracy.

These are the people known as "red shirts" – supporters of Thailand's civil government that was overthrown after a nonviolent coup in 2014. The ruling military regime is supported by the so-called "yellow shirts," representatives of elites who thought former Prime Minister Yingluck Shinawatra was corrupt and had to go.

The junta was supposed to "restore order" after months of street protests, before installing a new government. But the promised elections have since been postponed several times. This has caused dissatisfaction on both sides of the political spectrum.

One of Pattaya protest participants, Travinan, says she is suffering financially because of the political crisis. The revenue from her bakery decreased by 60 percent and she now earns 1,800 baht (€50) a day, when it used to be 5,900 baht (€160).

"We need these elections urgently," says Travinan. "It is the only way to break the deadlock."

Another protester called Took says she is motivated to speak out because of the bloody crackdown on red-shirt protesters in 2010 at the Wat Pathum Wanaram temple in Bangkok.

She says she witnessed how the army killed pro-democracy protesters who were seeking shelter in the temple. Took could hear how the soldiers were told "not to let anyone escape."

Loud music interrupts Took's story and she starts dancing obsessively, as if she wants to get rid of frustration. The song playing is the popular protest hit written by a group called "Rap Against Dictatorship."

The song is called "Protee Kum Mee," meaning "my country has this." Rappers criticize the military regime, the unfulfilled promise of elections and the lack of freedom of speech. The song has received more than 46 million views on YouTube since October.

One of the rappers, known as Hockhacker, is a rather shy young man who seems a bit overwhelmed by the sudden success of the music he made together with his friends.

"This is the third year I am in the hip-hop underground scene, but so far I haven't got much attention," he tells me. "Only when the police noticed our song, the papers started writing about it and then it went viral."

So far, the government didn't do much to stop the band – which is remarkable because the song is full of explicit criticism.

"We didn't do anything illegal," Hockhacker explains. "Besides, I think the army and the police realize that threatening or arresting us would only make us more popular." 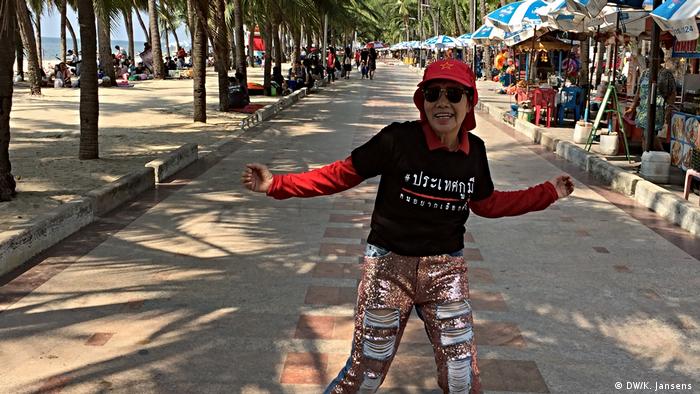 'Took,' a red shirt protester, dances during a demonstration in Pattaya, Thailand

However, the junta has its own way of dealing with critics. People are regularly accused of breaking the assembly ban, which makes it illegal to have a political meeting with five participants or more.

So-called lèse majesté laws also make it a crime to disparage the royal family, and they can be also be applied to anyone who opposes the military junta.

Sudsanguan Suthisorn, an associate professor of criminology, experienced first hand how far intimidation can go. Two years ago she joined a protest movement.

About forty people put funeral flowers next to the civil court to express their doubts about judicial independence. "I didn't even touch the flowers, I was just standing there, but they saw me as the pack leader," she says. The professor was removed from the group and put in jail for one month.

I persuade her to drive by the court building again and show me the exact location where she was arrested. "I won't get out of the car," she says. "This is not a safe place for people who want to change the regime."

I ask the professor how she sees the future of her country. "I don't think in my lifetime I will ever see a big change in Thailand," is her bitter answer.

One coup after another

The campus of Bangkok's Thammasaat University is being watched by the regime as well.

Here I meet Parit Chiwarak, an eloquent young man who is fighting to reform the educational system and who organizes political meetings.

"They spied on my house, even my mother has been followed. Every simple class discussion is being watched by a safety agent," he says. "Once the police officers entered our class room and they brought handcuffs to intimidate the students who were present."

This generation has been raised with coups. During their childhood, in 2006, the army toppled the government. Eight years later, when they were teenagers, it happened again. The 2014 coup was the twelfth in 80 years.

These young people don't think the upcoming elections will immediately bring peace and stability to the country. Political power relations are too complicated to be changed overnight.

Last year an important constitutional reform was adopted, which gave a lot of power to the army – even though there was supposed to be a new civil government.

According to Parit, the country awaits another decade of difficulties, before going to real justice and democracy, but the students don't intend to take it to the streets.

"The dictatorship could use any protest as an argument to postpone the elections again," says Parit, adding that this is not the right moment for street actions.

But if the junta does not keep its promise of organizing elections, widespread protest will be inevitable – and they could end with violence.

The election date needs to be approved by the king on January 2, and then two days later by the election committee. Only then can the Thai people be sure that they will go to vote by the end of February.

Future of Thailand lies in the balance