Although Thailand's junta recently lifted a nationwide curfew, political protests remain banned. HRW's John Sifton explains why crackdowns on freedom of expression and association will continue in the polarized country. 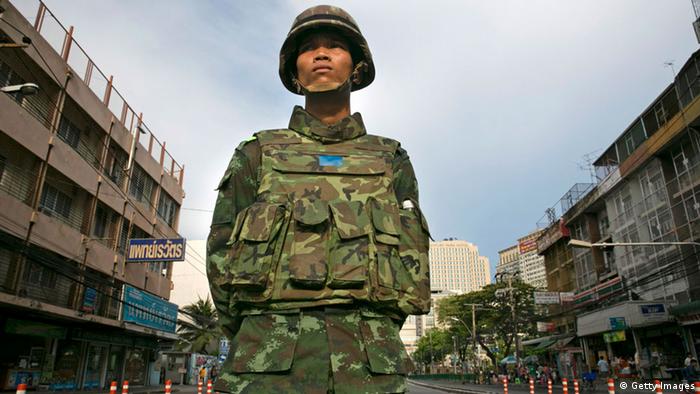 On June 14, Thailand's military government lifted a curfew it imposed throughout the country after seizing power in a coup on June 22. But political protests and criticism of the takeover remain banned by the junta, which also announced that a temporary constitution would be drafted and an interim government installed in about three months. Elections, however, could take more than a year, as peace and reforms must first be achieved, said General Prayuth Chan-ocha, who heads the military council.

Thailand has been plunged into a political crisis over the past decade. The division began in 2006, when then-Prime Minister Thaksin Shinawatra was ousted in a coup and subsequently fled to avoid a corruption conviction. From then until the military coup took place, the country was immersed in a battle for political power, pitting the Bangkok-based middle-class and establishment as well as the staunchly royalist south against the north and northeastern rural support base of the Shinawatra clan.

In a DW interview, John Sifton, the advocacy director for Asia at Human Rights Watch (HRW) calls upon the junta to end censorship, and facilitate a speedy return to democratic rule, saying the military's vision for restoration of civilian rule appears aligned with Yellow Shirt demands against the former government.

DW: How concerned is HRW about the military's actions in Thailand?

John Sifton: Human Rights Watch is extremely concerned with the military actions in Thailand since May 20. They have overthrown a civilian government, arrested political leaders and journalists, and demanded that media exercise censorship to avoid remarks that are critical of the military's actions. They have not offered a clear roadmap for a return to civilian rule. 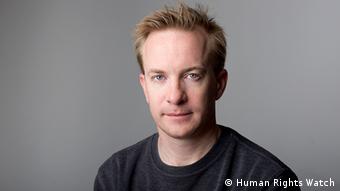 Sifton: "The coup is more than a threat - it is a serious blow to democratic principles in Thailand"

Furthermore, they have revealed themselves to be excessively sensitive to criticism since the coup, which suggests that crackdowns on freedom of expression and association will continue.

How would you describe the present situation in Thailand?

Thailand’s political situation is tense and volatile. Because of the harsh crackdown on political leaders and journalists, protests against the military command are limited and cautious - but they have included flash mob techniques, quick pop-up protests which end before authorities arrive to conduct arrests, and arrests have occurred. As frustration grows with the military command, however, protests could grow, and if the military fails to exercise restraint in responding, serious abuses could occur in the context of arrests and detention.

Would you agree with analysts who argue the army appears to be carrying on the fight of the anti-government protesters?

Human Rights Watch is not a partisan organization. We have reported human rights abuses by the government of former PM Thaksin Shinawatra as well as during the military takeover in 2006 and during the Abhisit government that came into power afterwards, and we reported on human rights issues during Yingluck Shinawatra's government.

Over the past days thousands of Cambodian workers have fled Thailand amid fears of a crackdown on illegal labor. Thailand expert Kim McQuay examines the reasons behind the exodus and the potential economic implications. (16.06.2014)

There is no doubt, however, the military has not seized power as a neutral intermediary between rival Yellow Shirt and Red Shirt groups. On the contrary, the military's vision for restoration of civilian rule appears aligned with Yellow Shirt demands against the former Yingluck government, and the military has a long and contentious record of opposition to Shinawatra involvement in politics. There is, at the very least, an alignment of interests between the military and 'anti-government' protestors who, before the coup, sought to bring down the Yingluck government.

What does HRW call for in Thailand?

The military command should immediately end restrictions on freedom of assembly and association, end censorship, and facilitate a speedy return to democratic rule.

How many people are still held by the military in detention camps?

It is impossible to verify the exact number because the military is denying that many of the people they detained are in fact in detention, but it appears that the number is in the hundreds - about 180 as of today.

The junta has said that elections won't take place in less than a year's time. What is your view on this?

If the military truly wants to use elections to return to democratic rule, it should announce speedier plans to hold elections. There is no good reason for such a lengthy delay: Thailand is not an authoritarian country holding first time elections; it has established electoral institutions and practices which could be restored for a new election, far sooner than the vague plans outlined by the military.

What do you make of the military's recently launched 'love and harmony' campaign?

I’m sure that many people in Thailand, like anywhere else in the world, value when citizens love one another and live in harmony. But harmony is not actualized by propaganda and silly events like military junta members leading sing-alongs with school children - it is made real by strong democratic institutions and a vibrant economy, precisely the things that the military junta damaged when they seized power last month.

How big of a threat does the coup pose to the development of democracy in Thailand?

The coup is more than a threat - it is a serious blow to democratic principles in Thailand. The very fact that it took place shakes the faith that citizens have toward democratic institutions. One of the goals of democratic constitutional rule is to ensure that when political parties strongly disagree about matters, debates are resolved through rules of process and elections - as opposed to force and extra-constitutional means. Having faith in such a system is a cornerstone to a healthy democracy. 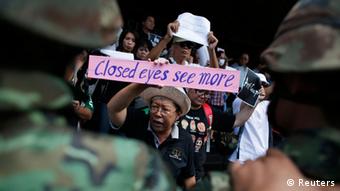 "The military command should immediately end restrictions on freedom of assembly," says Sifton

Recently, a meeting took place in the US between human rights organizations and representatives of Thailand's Ministry of Foreign Affairs. What was the purpose of the meeting, and what was discussed?

We acknowledged last week that a senior Thai diplomatic official, the ambassador of Thailand to the United Nations, requested a meeting with the executive director of Human Rights Watch, Kenneth Roth, in New York.

As we noted before the meeting, we intended to listen to what the ambassador had to say, and then communicate Human Rights Watch’s concerns about events in Thailand since the military coup which began on May 20, in particular, concerns about arrests of political leaders, academics, and journalists, and new restrictions on political activity and freedom of expression and freedom of assembly. The meeting took place on Thursday June 12.

John Sifton is the advocacy director for Asia at Human Rights Watch.