Despite the promised return to democracy, the military government in Thailand has shown little inclination to hold elections anytime soon. Fears abound about the country sliding increasingly into authoritarianism. 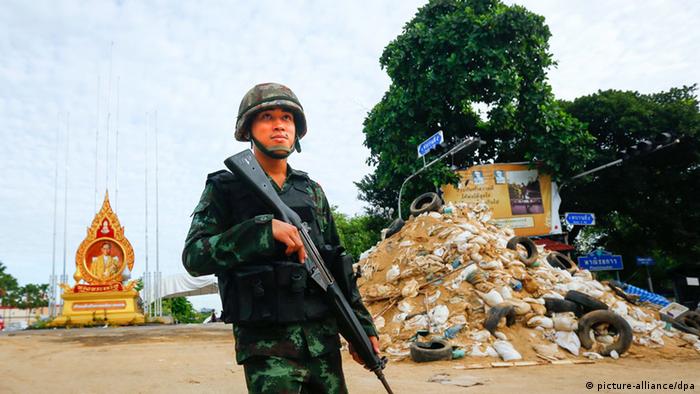 A free and frank discussion about the prevailing political situation in Thailand can, under current circumstances, only take place outside the country. Since the 2014 military coup, the freedom of expression and of the press has shrunk drastically in the Southeast Asian nation. Critics are either coerced by the military to acquiesce in government's actions or, in worst cases, vanished without trace.

At the time of the coup, Pavin Chachavalpongpun was associate professor at Kyoto University's Center for Southeast Asian Studies. Later, when the ruling junta summoned Pavin to Bangkok for his political views, he refused to go saying that the semester had already begun and pointing to his teaching commitments. In a lighter vein, Pavin wrote on his Facebook page – which commands a lot of influence in Thailand with about 120,000 followers – that he could rather send his deputy.

But the military was not amused by this gesture. In the end, it revoked Pavin's passport, forcing him to live as a refugee in Japan ever since.

However, it's not an isolated case, as many other Thai intellectuals have left the country over the past couple of years. At the same time, foreign academics and scholars have refrained from traveling to Thailand.

For instance, Wolfram Schaffar, who works for the Institute for International Development at the University of Vienna, hasn't visited Thailand since the 2014 coup. The expert had previously been a regular visitor to the country for work and research purposes. 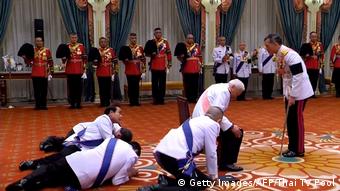 Upon receiving invitation from Schaffar and his colleague Oliver Pye of the University of Bonn, Pavin recently visited Germany to discuss the political developments in Thailand.

In the last 70 years, Thailand has faced 17 military coups. To put it simply, on the one hand, there are the traditional elites in Thai society, comprising of the royal household, the military and the bureaucracy. Their overarching aim is to preserve the existing state ideology, which can be described with the three terms nation, monarchy and Buddhism.

On the other hand, there are sections of the emerging middle class that demand more say in the political process. These segments are supported by peasants, particularly in the north of the country.

The polarization of Thai society has grown considerably over the past two decades.

The military takeover of power in 2014 is just a part of this decades-long fundamental power struggle. But Pavin says the move also had a new dimension, as it was about not just putting the traditional elites back to power but rather preparing the country for a new era.

That's related to Thailand's King Bhumibol, who died in October 2016. He was widely viewed as one of the three pillars of Thailand's political establishment. And in 2014, when the king was about to die, the military stepped in.

Will Thailand's new king be a unifying figure?

Thailand's military government has named Crown Prince Vajiralongkorn as the new king. The controversial prince is taking the throne during a political crisis and it is unlikely that he will provide any solutions. (29.11.2016)

BBC may have violated Thailand's strict laws prohibiting insulting the king, the miltary junta has said. Authorities have launched an investigation against the international broadcaster's Thai language bureau. (07.12.2016)

Authorities have failed to arrest the ex-abbot of Thailand’s most powerful Buddhist sect. However, they can claim a minor victory. George Styllis and Patthiya Tongfueng report from Pathum Thani province. (14.03.2017)

"It was about regulating and controlling the royal succession," noted Pavin. In doing so, the military wanted to secure its and the conservatives' privileged position, which is closely tied to the monarchy.

Fear of the new

The traditional elites were driven by fear, Pavin underlined, adding that they were scared of facing an uncertain future. They were particularly afraid of the then Crown Prince Vajiralongkorn, who is now king.

The new monarch of Thailand is in every respect the opposite of his father, who enjoyed wide veneration among Thais. "The previous King Bhumibol was too successful," says Pavin. It was clear that Vajiralongkorn would never command the reverence that his father did.

In fact, Vajiralongkorn is the exact opposite of his father, who was regarded as disciplined and dutiful. The son's image is blemished in the eyes of many Thais by his tattoos, erratic behavior and three marriages. Another issue is the fact that the new king prefers to spend much of his time in the southern German city of Munich rather than in Bangkok.

"A joke is already doing rounds among Thais: the capital of Thailand is no longer Bangkok, but rather Munich," said Pavin.

Without doubt, the monarchy's reputation, which Bhumibol had built up over decades, has already been destroyed, the expert stressed. The elites fear that the new king will undermine their hold on power.

On the road to authoritarianism

To counteract the loss of power, the Thai military government drafted a new constitution, which was adopted by the people in a referendum in August 2016.

The new constitution reduces the number of elected senators in the legislature's upper house and strengthens institutions such as the constitutional court, the anti-corruption authority and the electoral commission. These are powerful institutions in Thailand. But they frequently meddle in politics, instead of being neutral actors committed to protecting democracy and the rule of law.

In 2008, for instance, the constitutional court enforced a change of democratically-elected government.

"In other countries, these institutions serve in defense of democracy, but in Thailand they are very closely linked to the interests of the traditional elites," stressed Pavin. 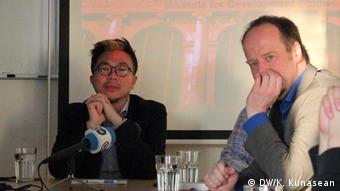 The analyst said that he couldn't initially comprehend the Thai people's decision to vote in favor of the military-drafted constitution. But now, after talking to so many of them, he reckons that people simply wanted to move on with their lives.

They were afraid that in the event of a rejection of the constitution, the military would have started the process all over again and that would have pushed the timetable for new elections even further into the future.

But Pavin says that was "a short-term perspective, as the new constitution will shape Thai politics for many years to come."

"Thailand is definitely moving towards authoritarianism, in all respects."

Thailand's ruling military government said recently that a general election previously promised for this year, and then postponed to early 2018, is now likely to be delayed until the second half of 2018.

Where is the opposition?

To lighten the gloom, Pye from the University of Bonn recalled many successful democratic movements in Southeast Asia. He also noted that the Thai monarchy has lost influence under the new king and that deep cracks have emerged in its state ideology. "It seems that not much is happening the way the junta wants."

But Pavin remains skeptical. While he believes that the traditional elites are eventually bound to lose their grip on power, he doesn't yet see any alternative emerging, even if it's clear to him where it must come from. "The key is the middle class." Ultimately, the establishment of a new social order would depend on them, he said, adding: at the moment, though, it appears to be a long way off.

Protesters have called for the resignation of Thailand's prime minister, Prayuth Chan-ocha. But now a court could be the one to decide his fate.