Cambodia has recently reopened the final stretch of a railway running from the capital Phnom Penh to the border with Thailand. New railway lines in the region are expected to give a fillip to economic activity. 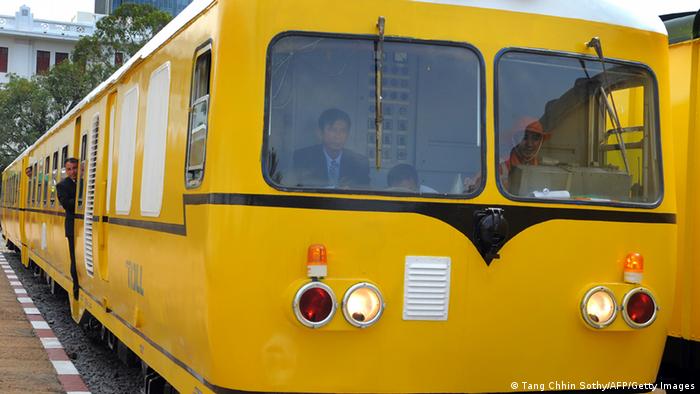 It's slow and not as comfortable yet as trains in developed countries, but Cambodians were nonetheless proud when the first train in decades left the Cambodian capital Phnom Penh for border town Poipet last month, effectively connecting the northern part of Cambodia with the south.

This rail line will soon cross the border and connect with Thailand. It's expected to become popular among travelers and boost trade between Thailand and Cambodia.

Sitting in the train to Poipet on a quiet Sunday morning, music teacher Hang Sothanun said that he's happy that he can now take the train. "I have to travel all over the country, most of the time by bus or by car. But the train is really nice. It's relaxing and it offers a very nice view of the countryside," he told DW.

During decades of war and poverty, Cambodia's railway lines, which were initially built at the time of the French colonial rule, were severely damaged and neglected. Only two years ago, the first line in the country was reopened, connecting Phnom Penh to the coastal city Sihanoukville.

"It took our country some time to restore the lines, but I think we are doing well now," Sothanun said, while enjoying the view of green rice fields and small villages. "This train is also a lot better than the ones in the past. Back then the trains were using charcoal. Now it's driven by electricity. It's a good development."

At present, the train line ends in Poipet, a Cambodian town on the border with Thailand. But the train is expected to soon make it all the way to the Thai capital Bangkok. Observers say this could bolster trade ties between the two countries.

Last year, trade flows between Thailand and Cambodia were valued at $6.16 billion (€5.3 billion), an increase of almost 10 percent compared with 2016. The neighbors hope to boost that to $15 billion by 2020. To achieve that goal, a bilateral working group was established earlier this year. It has been assigned to address trade issues, attract Thai investors to Cambodia and monitor the progress of initiatives, the Khmer Times reported.

Va Simsorya, the spokesperson of Cambodia's Ministry of Public Works and Transportation, told DW that his ministry hopes an agreement with Thailand will be signed this year. After doing so, Cambodian Prime Minister Hun Sen and his Thai counterpart Prayuth Chan-ocha are expected to officially open the train service between the two countries.

Simsorya said that the train could be a good alternative for freight transportation. "But we realize that we need to strengthen certain sections of the railway, for example to make bridges stronger. The whole track doesn't have the same transport capacity yet. In some sections it can only carry up to 15 tons," he explained.

For Cambodia the plans don't end with the opening of a rail line to Bangkok. Last year, the Royal Group, the company in charge of the Cambodian railways, signed an agreement with the Chinese companies Railway 17th Bureau Group and Sino Great Wall International Engineering. They are studying the idea of building new lines that will connect Phnom Penh to Ho Chi Minh City in southern Vietnam and to Siem Reap in the north of Cambodia.

This would be part of China's massive Belt and Road Initiative, an ambitious $1 trillion infrastructure project that aims to bolster Beijing's trade and investment links with economies in Asia, Africa and Europe.

Spokesperson Va Simsorya confirmed that these ideas are being studied. But the Cambodian government still has to decide on what to do and will need support if it decides to continue with these goals, he said.

In the train that slowly bumps its way to Poipet, Hang Sothanun shows good faith in Cambodia's railway future. A few years ago, the music teacher traveled in a train in India. "There the trains are nice and the facilities are good. Here it's not entirely smooth yet. But I hope that one day we can be on the same track as India," he said.

Cambodia further drifts away from democracy

Strongman Hun Sen has won Cambodia's general election, winning 80 percent of votes. The result is likely to turn Cambodia into a one-party state and can have serious consequences for the country. Ate Hoekstra reports. (30.07.2018)

Sam Rainsy: Hun Sen will be 'the ultimate loser'

Cambodian PM Hun Sen is running virtually unopposed in Cambodia's general election on July 29. DW spoke with former opposition leader Sam Rainsy about the dangers of dictatorship and the state of the opposition. (27.07.2018)

The proposal has stoked fears of censorship in Cambodia, where curbs to press freedom have increased in recent years. Many believe the new law could target those critical of the government. Ate Hoekstra reports. (10.04.2018)